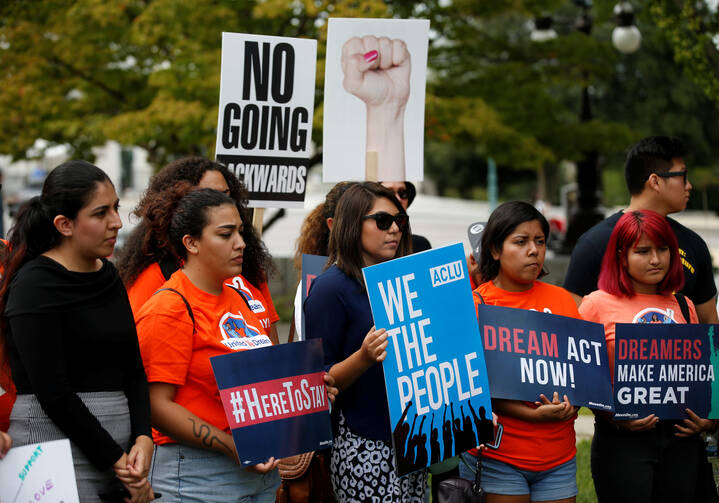 Young immigration activists and those enrolled in the Deferred Action for Childhood Arrivals program, or DACA, take part in a rally Sept. 12 in Washington to urge Congress to pass the Dream Act (CNS photo/Joshua Roberts, Reuters).

Nearly a month has passed since the Trump administration started a six-month countdown on ending the DACA program. Deferred Action for Childhood Arrivals has protected the nation’s so-called Dreamers, undocumented immigrants who were brought to the United States by their parents.

Congress has until March 5 to pass legislation to help immigrants who are currently shielded from deportation by the program. People registered under DACA have been allowed to continue their education and to legally work in the United States. What any new authorizing legislation will look like is still anyone’s guess.

“Things are extremely fluid,” says Ashley Feasley, director of migration policy and public affairs at the U.S. Conference of Catholic Bishops. “We still at this moment don’t have a deal, and it remains vital that we continue to push for the Dream Act.”

The Trump administration’s decision to rescind DACA, a program created by an Obama administration executive order and criticized by many as a constitutional overreach, seems to have galvanized efforts to pass the long moribund Dream Act.

The Trump administration’s decision to rescind DACA seems to have galvanized efforts to pass the long moribund Dream Act.

“Six months is a short time period. We know that on March 5, every day after that 1,400 Dreamers will lose their work authorization,” Ms. Feasley says, noting Congress has been trying to deal with the issue for years.

Back in 2001, Senator Orrin Hatch proposed the first version of the Dream Act. It was reintroduced in 2010 and earlier this year.

“The president may have in some ways done the Dreamers a favor because he set a deadline,” says Kevin Appleby, senior director of international migration policy for the Center for Migration Studies of New York. “Congress doesn’t work very well unless they have a deadline staring them in the face. That puts pressure on them to act.”

Senator Chuck Schumer and Representative Nancy Pelosi reported having a “very productive meeting” with Mr. Trump on legislation protecting the Dreamers on Sept. 12, according to Ms. Pelosi. On Sept. 25, Democrats attempted to force a vote in the Republican-controlled House on the Dream Act using a measure called a discharge petition. Ms. Pelosi, in her address from the House floor, said Mr. Trump “has put doubt as to whether we respect the contributions of newcomers to this country.”

Nonetheless, what to do about Dreamers is on the congressional shortlist, according to Mr. Appleby. He believes that, within the various proposals for Dreamers before Congress, “the contours for an agreement exist.”

On Sept. 25, Republican senators proposed a new bill—the Succeed Act—that provides a way for Dreamers to legalize their status, though it would not allow them to sponsor family members for legal entry into the United States. “The gaps can be bridged…. They can come up with a fair piece of legislation,” Mr. Appleby says, noting that it may also include border security measures. “The American public overwhelmingly supports Dreamers in polls. I think they can get something done, it’s just that as usual, the devil is in the details.”

While Washington fiddled with Dreamer legislation, the Archdiocese of Los Angeles and Catholic Charities of Los Angeles started a series of DACA renewal workshops on Sept. 26, with immigration experts on hand to help fill out paperwork. Some DACA recipients—those whose work permits expire before March 5—are eligible to renew their work authorization by Oct. 5. The archdiocese’s The Next America website offers resources as well as workshop information.

“Most people are a little confused about whether they qualify,” according to Isaac Cuevas, associate director of immigration affairs for the archdiocese. If they have let their work permits expire already, they are likely ineligible to renew.

“A lot of people are apprehensive. But people also feel that if anyone deserves this, it’s these people,” he says. “People who came here at that age are part of the fabric of this country. Entrepreneurs and go-getters, the epitome of what immigrants are and what the American dream can be.”

Mr. Cuevas, who was born in the Mexican city of Querétaro, says he, like the Dreamers, saw what his parents gave up to come to the United States. “Seeing [your parents’] struggle forces you not to take what we have here for granted,” he says. “They’re hopeful. They’re also not going to sit back and just wait for something to happen. They’re active. They have a strong, resilient voice.”

Immigrant advocates will need to keep it up, according to Feasley at the U.S.C.C.B. “Keep the pressure on Congress,” she says. “Congress has been unable to get this done. Now they must.”