Are there lessons to be learned from Bernie Madoff in the Trump era? 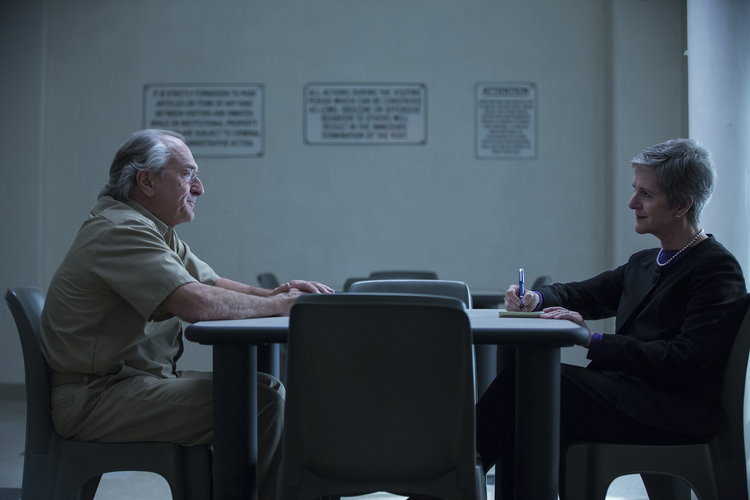 Robert De Niro as Bernie Madoff and Diana Henriques as herself in "The Wizard of Lies." (Craig Blankenhorn/HBO)

Right around the 2011 publication date of her book about the Bernie Madoff scandal, The Wizard of Lies, Diana Henriques found herself in a bit of a surreal situation, which she described for me in a recent interview. She was sitting in The New York Times offices, waiting for Robert De Niro to get on a conference call. When he got on the line a few minutes late, he apologized for the delay and introductions were made.

“Diana!” De Niro said over the phone when Henriques was introduced. “Yes, Mr. De Niro,” she replied. “Diana, I am Bernie Madoff.”

The Madoff that Henriques reveals in her book and that De Niro brings to life on screen is flawed, fascinating and Shakespearean in scope.

It is a sentiment that anyone who watches Barry Levinson’s “The Wizard of Lies” on HBO would agree with. De Niro looks and behaves eerily like Madoff, the one-time “financial genius” who was exposed as the perpetrator of the largest Ponzi scheme in history in 2008. The Madoff that Henriques reveals in her book and that De Niro brings to life on screen is flawed, fascinating and Shakespearean in scope.

As the first journalist to interview Madoff in prison in late 2010 and early 2011, Henriques had extensive correspondence with him and sat down privately with De Niro for a very long and intense discussion about her recollections. Soon after that, she was shocked to learn that the actor and the filmmakers behind the project thought she should consider playing herself in the movie. Following some initial hesitancy, she decided to embark on “a great reporter’s adventure,” making her film debut playing opposite the iconic De Niro.

It is both disturbing and captivating to watch De Niro’s Madoff act with such supreme confidence and measured calm while a $65 billion fraud hangs over his head.

De Niro brought Madoff to life with such chilling perfection that it made Henriques’s job as a first-time actor that much easier. “The fact that he was so totally Bernie Madoff with me put me at ease,” she tells me. “I wasn’t really interviewing Robert De Niro; I was interviewing Bernie Madoff, and I’d done that before.”

For viewers, it is both disturbing and captivating to watch De Niro’s Madoff—before his crime comes to light—act with such supreme confidence and measured calm while a $65 billion fraud affecting tens of thousands around the globe hangs over his head. For those of us who lose sleep over an overdue credit card payment, it is a breathtaking feat of compartmentalization that Madoff had pulled off for decades. Even after he is behind bars—both sons dead (one by suicide) and his wife no longer speaking to him—Madoff still projects the seductive sense that he is immaculately in control and unruffled. “There is no doubt,” Henriques says about her meetings and correspondence with Madoff, “that there’s no conversation with a con man that isn’t a con. He’s conning himself, me or both of us.”

“There’s no conversation with a con man that isn’t a con. He’s conning himself, me or both of us.”

Henriques, who has covered dozens of Ponzi schemes during her award-winning career as an investigative business reporter for The New York Times, believes the Madoff case redefined the notion of a Ponzi scheme by playing against type. Instead of being the stereotypical charismatic extrovert, Madoff’s self-effacing, low-key manner inspired trust among the most sophisticated investors in the world. “Madoff realized that the strongest Ponzi schemes don’t offer to double [investors’] money in 50 days,” she says. “They offered people: ‘Sleep well for the rest of your life. I’ll take care of you.’”

What can WWII propaganda films teach us in the era of fake news?
Bill McGarvey

It is a sentiment echoed throughout many of the interviews she conducted with people who worked for Madoff. “He made you feel safe” was the oft-heard phrase. The Wizard of Lies reveals that the cost of Madoff’s betrayal cannot be captured on a balance sheet. “There is an aspect about Ponzi schemes that is particularly diabolical and destructive of civilized society,” says Henriques. “Ponzi schemes deliberately target trust. They use it and they kill it.... I think we all inherently understand how much our world is held together by strands of trust.”

In this age of politicized facts and fake news, are there lessons to be gleaned from Madoff in the Trump era? “To be a successful con man you need exactly the opposite of the kind of antics we’re seeing on the national political stage now,” says Henriques. “Con men must be scrupulously self-controlled. They must be relentlessly careful and intentional…. They must never permit the slightest doubt about their veracity to ever arise, ever,” she adds emphatically. “A lot of people talk about this era of the political con man. That’s an insult to con men.”

How does Trump get into the Madoff horror? The movie is amazing. It shows the underbelly of the investment world---there is a little Madoff in a lot of them----see 2008! To include Trump is, at best, dishonest.

Thanks for your comment, Tom. I think it's safe to say that Madoff pulled off a fraud that was breathtaking in its scope. Even in the context of the 2008 financial crisis. At least that dealt with actual, legitimate financial instruments. Madoff hadn't done a trade in 16 years and ran a classic Ponzi scheme. I think Ms. Henriques was making a comparison between how a consummate con man like Madoff-- thought of as a legitimate pillar of society--operates and the increasingly disturbing behavior and rhetoric from the White House. I think it's safe to say that the notion that Donald Trump is a con man of sorts has definitely been part of the public discourse of late, so it's a fair comparison to make.