What can WWII propaganda films teach us in the era of fake news? 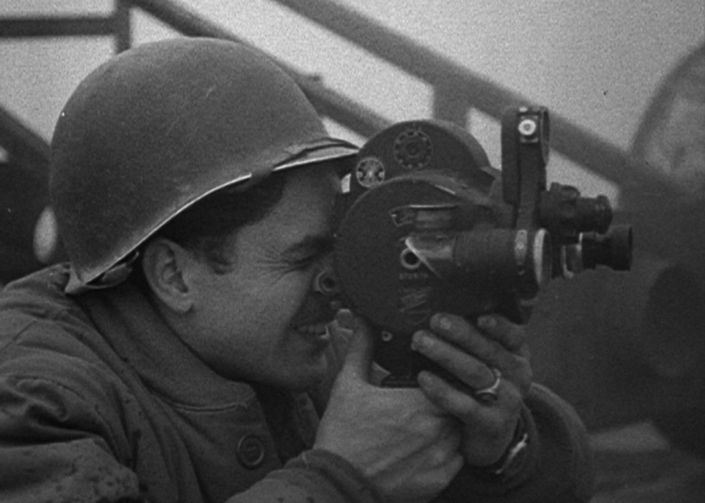 As our nation moves ever deeper into an information war in which our commander in chief regularly accuses respected media outlets of peddling “fake news,” it is oddly appropriate that there is a revival of interest in a very different type of information war from another time.

The Netflix documentary series “Five Came Back,” along with the fictional British film “Their Finest,” have brought World War II propaganda films back into public consciousness. In a genre that has traditionally been best known for Leni Riefenstahl’s infamous Nazi masterpiece “Triumph of the Will,” this current reappraisal looks at some of America’s most distinguished filmmakers: John Ford, William Wyler, John Huston, Frank Capra and George Stevens.

This small cadre of directors voluntarily left successful careers in Hollywood to work on behalf of the American war effort. Their numerous propaganda films are more than historic artifacts; they provided unprecedented witness to the actual encounter of war and suffering. As a body of work, it is a reminder to us in the 21st century of the power—and responsibility—inherent in the stories we tell about our enemies and ourselves.

Under the nimble direction of Laurent Bouzereau and produced by Steven Spielberg, “Five Came Back” uses archival war footage and interviews from the five original directors and combines them with commentary from five modern moviemakers: Francis Ford Coppola, Steven Spielberg, Guillermo del Toro, Lawrence Kasdan and Paul Greengrass. The knowledge, affection and, at times, awe these present-day filmmakers express for their forebears provide valuable context. It also offers a window into the nature of visual storytelling and the use of a powerful mass media tool as a weapon to win American hearts and minds.

Given our current polarization, it is easy to become nostalgic for a time in which there was clarity regarding our enemies and mission.

Not all of the commentary is favorable. For all of the clarity and power of Capra’s “Why We Fight” series and John Ford’s Oscar-winning “Battle of Midway,” there are also films that draw heavily on racist stereotypes. Capra’s “Know Your Enemy: Japan” is an interesting example of how narratives were created for American audiences. Allied filmmakers and the War Department were extraordinarily conscious of how they depicted our enemies. Germans were consistently portrayed as having been duped by a cartoon-like gang of Nazi thugs headed by Adolf Hitler while the entire Japanese race was characterized as bloodthirsty “carbon copies” of one another. The contrast between these portraits is no doubt rooted as much in the radical racial “otherness” of the Japanese as it is in the fact that there were millions of Americans of German descent fighting on our side.

Today it is difficult not to see the dehumanizing tone of “Know Your Enemy: Japan” as the racial and cultural backdrop that justified the existence of Japanese internment camps in the United States and the use of atomic bombs. It is a sobering reminder in an age of growing Islamophobia of how fear and ignorance can gain cultural momentum and lead us to act in ways contrary to our values.

Given our current polarization, it is easy to become nostalgic for a time in which there was clarity regarding our enemies and mission, but “Five Came Back” is ultimately about the journeys of the men behind the cameras. Having mastered the art of bringing fictional stories to life in a town built on artifice, these directors ventured beyond their own highly mediated lives in Hollywood to document a world of unscripted, life-threatening action. Their encounter with the stark reality of suffering and death had such a profound impact that they returned home changed men. Each went on to create the best films of their lives, including The Best Years of Our Lives, It’s a Wonderful Life, The Searchers, A Place in the Sun and The Treasure of the Sierra Madre. These were films of great depth and nuance often marked by deep ambivalence about what constituted heroism.

It may seem odd to think of World War II as a “simpler” time, but, in terms of media, that pre-television and internet age looks like an unadorned log cabin when compared to the high-tech Tower of Babel that constitutes 21st-century communications.

The shadow side of our revolution in technology and information is that it allows us to gather endless data while simultaneously retreating into very mediated and meticulously curated lives. Our sources of truth have shrunk down to our personal experiences and the exceedingly filtered information bubbles we inhabit. The opportunity for actual encounter and engagement with real human suffering can now be technologically engineered out of the discourse.

It is little wonder that we have sunk into a morass of rhetorical point-scoring and alternative facts. We have become connoisseurs of our own personal brand of Kool-Aid and masters of endless discourse untethered to actual lives. The antidote to this, I am afraid, will not be found in more conversation—and certainly not through propaganda. Just as the sight of Americans stranded on rooftops during Hurricane Katrina had far more impact on public opinion than any political broadside, debates over “fake news” will collapse under the weight of images of American children with pre-existing conditions who no longer qualify for healthcare or stories of families destroyed by draconian immigration reform.

We can only hope that realization happens before the body count gets too high.

There was always fake news; I recall during the Viet Nam war, the 3 news channels would end their programs telling us how many Vietcong were killed that day; it was always 2000, 4ooo etc. I remember thinking how soon the US would surely "win", [like it was a game] as at the rate we were going there would be no [evil commie] Viet Kong left! Boy was I naïve!. Not only have I grown up but much of the world has too. thanks to the internet. No one is as naive as we were then. The narrative cannot be controlled. Now everyone can be a journalist and I'm good with that. Yes there is propaganda and false stories presented as facts. but that has always been the case. If anything fake news can be challenged easier now.

I agree, Rose-Ellen, that easy access to the internet has had tremendous benefits. But I'm not sure I would go so far as to say that "No one is as naive as we were then." The endless amount of content on the web doesn't necessarily mean we are better informed or less easily manipulated. What do we make of a man--armed with an automatic weapon--who travels to Washington DC to save children from a supposed sex ring that Hillary Clinton was allegedly behind? All based on an absurd fabrication on the web. That is beyond naivete and dangerous in ways we couldn't have imagined during the Vietnam war.