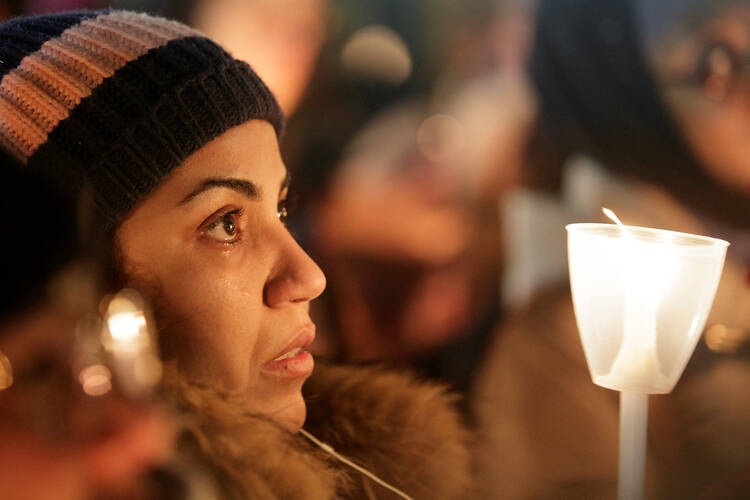 A vigil on Jan. 30 vigil remembered the victims of a rampage at the Quebec Islamic Cultural Center in Montreal on Jan. 29. Some news outlets originally reported erroneously that the suspect was a young man of Moroccan origins. (CNS photo/Dario Ayala, Reuters)

From the White House's “alternative facts” about crowd sizes at President Donald J. Trump's inauguration to a viral false interview quote showing Mr. Trump insulting Republicans in 1998, the problem of “fake news” is dizzying for journalists and media consumers alike.

Fake news has already even had violent consequences. The “pizzagate” story became a stand-out of the genre after a North Carolina man drove to Washington, D.C., in December and fired a weapon in a pizza shop, all because of a fake news story.

Sister Nancy Usselmann, F.S.P., director of the Pauline Center for Media Studies in Los Angeles, says the old rules of journalism no longer apply in the digital age, at least not in the same way. “Anybody can create news now,” she says, and not everyone who creates that news is subject to editorial filters. Our problem, says Sister Usselmann, is a problem of accountability.

Fake news is not unique to the United States of course. Nick Kouvalis, the campaign manager for Kellie Leitch, a candidate currently running to lead Canada's Conservative Party who praises and is often compared to Mr. Trump, resigned earlier this February after admitting to intentionally spreading fake news about the Trudeau government.

Want to combat 'fake news?' How much would you pay for a Spotify of real news?
Nathan Schneider

Our appetite for fake news does real harm to U.S. democracy
The Editors

Immediately following the tragic shooting at a Quebec mosque, rampant speculation led to false reports about the identity of the shooter, suggesting the suspect was a Moroccan Muslim. The shooter was in fact a French Canadian with a history of xenophobic views. Prime Minister Justin Trudeau specifically chastised U.S. outlet Fox News for propagating the false narrative. Fox News eventually apologized.

Some in Canada are trying to figure out how to stop the spread of fake news. “We saw what happened in the United States,” said Hedy Fry, a Liberal member of Parliament, in December. “The United States woke everybody up.”

Ms. Fry serves as the chair of the Standing Committee on Canadian Heritage, which considers the impact of media in Canada. The committee spent much of 2016 trying to think about how to negotiate the value of free speech and the need for reliable information and aims to deliver a report on fake news to Canadian Parliament in the spring.

Google and Facebook are trying out new tools for their Canadian services that might help users navigate to trustworthy information. These conversations might lead to new tools for media consumers, but Canadians have a long tradition of thinking even more deeply about media.

Marshall McLuhan, who taught at St. Michael's College in Toronto and was compared to figures as influential as Newton, Darwin and Freud, made significant observations about news media in his 1964 bestseller Understanding Media. McLuhan ends a chapter in that book called “Press: Government by News Leak” with the following: “The owners of media always endeavor to give the public what it wants, because they sense that their power is in the medium and not in the message or the program.”

Media consumers need to become “cultural mystics”—people who, instead of just reacting to stories, are able to practice “media mindfulness.”

Along the lines of his famous idea that “the medium is the message,” McLuhan suggested the specific messages in the news, the reports, are less important than the medium of the news itself. Whether those reports are true or false is certainly of interest for responsible readers, but it is not necessary for those who own publishing industries to sift out truth or falsehood in order to gain and shape an audience.

“Real news is bad news—bad news about somebody, or bad news for somebody,” McLuhan said, and the news is so effective because it is capable of shaping public sentiment. The news, as a medium, attempts to stir up its readers into a frenzy, which it often accomplishes by creating feelings of resentment, anger and fear. But if the news is a medium that often shapes its readers by using bad news, whether true or false, how are we to resist the temptations of fake news leading to real consequences?

While McLuhan was honing his media theories, Sister Usselmann’s Daughters of Saint Paul, a religious order started in Italy in 1915, came to Toronto in 1956. Dedicated to spreading the Good News of the church through the use of new media, the “media nuns,” as they are known, have embraced new media forms while also providing resources for what they call “media literacy.”

The Daughters of Saint Paul have media centers, stores and workshops all around the world, promoting responsible engagement with today’s media environment. They even have a resource for “praying the news.”

Navigating our news environment today, Sister Usselmann says, media consumers need to become “cultural mystics”—people who, instead of just reacting to stories, are able to practice “media mindfulness.” Inspired by the work of 20th century theologian Karl Rahner, Sister Usselmann says, “We can't reserve mysticism to the cloistered religious or the great mystics of the past. You have to bring it into your everyday context, and every Christian today is called to be a mystic.”

For Sister Usselmann, the heart of this mysticism is a contemplative approach that resists being taken along by the lightning speed of viral stories. Such an approach, she says, is necessary if Christians are to take seriously the task of being media literate and speaking the Good News into a world of so much bad news.

New legislation or better tools from social media companies might provide some helpful guardrails for ensuring verifiable information is circulated, but such tools are limited by the range of opinions and the public uses of the news. These efforts target the message, rather than the medium.

As McLuhan observed half a century ago, the medium of the news itself lends to stirring up public reactions. The Daughters of St. Paul, on the other hand, encourage media consumers to be aware of how the medium is shaping them.

Sister Usselmann’s encouragement to be “media mindful” suggests taking a step back. New apps and laws might help, she says, but “we really need to get back to an understanding of respect for the other persons because only then will it change.”

That goes, she says, for both the people responsible for creating the media and those consuming it.

Trumpian "alternative facts" pale by comparison with the Vatican telling the faithful that the male-only priesthood is a matter of faith.