Why Canadian Catholics are worried about Trump and Trudeau's oil alliance 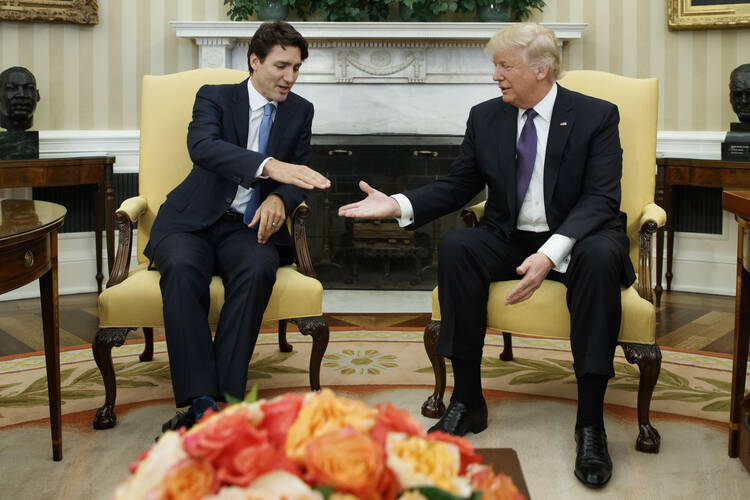 Canadian Prime Minister Justin Trudeau reaches for the hand of President Donald Trump in the Oval Office of the White House on Feb. 13, 2017. (AP Photo/Evan Vucci)

When President Barack Obama decided after years of consideration not to approve TransCanada Corporation's Keystone XL pipeline in November 2016, Canadian Prime Minister Justin Trudeau responded with a mild expression of disappointment that noted his respect for the right of Canada’s neighbors to make the call. But with Donald J. Trump at the U.S. helm, Mr. Trudeau twice pressed the new president on the $8 billion project, which would carry more than 830,000 barrels of Alberta oil a day to refineries in Texas.

His efforts were rewarded. Last month, the newly inaugurated President Trump invited TransCanada to resubmit its application and ordered an expedited review.

Following Mr. Trudeau's amiable first visit to the White House, the two North American leaders issued a joint statement, committing to improving ties on issues related to energy and the environment and citing the Keystone XL project as one such collaboration. The pipeline will move unrefined petroleum from Alberta's oil sands—a mixture of sand, clay, water and bitumen, a dense form of petroleum—to the U.S. Gulf Coast.

Canadian Catholics have been standing with indigenous people against oil projects.

Mr. Trudeau has consistently supported Keystone and other pipeline projects, but he has tried to balance this support by demanding that every province adopt a direct tax on carbon consumption by 2018 or participate in a “cap and trade” exchange. Alberta's governing New Democratic Party has already imposed a controversial carbon tax in order to gain a “social license” in exchange for pipeline projects. The diverging efforts—moving environmentally unfriendly bitumen south while seeking to contain carbon use up north—highlight the nation’s conflicted approach to energy and ecology.

Michael Buttrey, a 34-year-old Toronto resident from Edmonton, Alberta, understands Canada’s oil sands quagmire. “I'm not happy that more oil will be pumped out of the ground and then produced and burnt in the world,” he admits, “but because I come from Alberta, I know that oil is very important to the Albertan economy and to the Canadian economy as well.” Mr. Buttrey also says that while pipeline projects in Alberta are frustrating for many, he appreciates that the coalition of a Liberal federal government and an N.D.P. provincial government (the left-leaning party took over after a 44-year run by Conservatives) will be overseeing these projects for now.

Canadian environmentalists are not satisfied, however, especially after Mr. Trudeau announced the approval of two new oil pipeline projects inside Canada last November. Protests were organized immediately, and Mr. Trudeau embarked on a difficult cross-country tour, listening to the frustrations of Canadians, especially among the nation’s indigenous groups.

“There was great hope and expectation on the part of many Canadian Catholics that there would be significant change for the protection of our planet,” Sister Mary Tee, director of the Mercy Centre for Ecology and Justice, established by the Sisters of Mercy, comments via email. “Catholics and many other Canadians saw [Mr. Trudeau’s] election as a unique opportunity to engage in dialogue on the climate change and indigenous issues which Pope Francis had addressed in his encyclical ‘Laudato Si’.” The pope went further this week, arguing that indigenous groups must give prior consent to any economic activity affecting their ancestral lands.

Oil was a slippery campaign issue in Canada's 2015 election, and many Canadians felt betrayed by the new prime minister’s decision to endorse the domestic pipelines. The approved projects include a significant modification of Calgary-based Enbridge Inc.’s Line 3, which runs from Alberta to Wisconsin, and an expansion of Texas-based Kinder Morgan's Trans Mountain Pipeline System, which runs from Alberta to British Columbia. Together, the pipelines will carry nearly a million more barrels of oil a day from Alberta's oil sands. During the same approval announcement, the federal government rejected the development of a third proposed project, the Northern Gateway Pipeline.

The new pipelines “will never be built because of the epic level of resistance that is taking place and will continue to take place.”

The exploitation of the oil sands themselves have already been a subject of concern to Catholics in Canada. In a 1975 document called “Northern Development: At What Cost?” Canadian bishops questioned the wisdom of extracting oil from Canadian oil sands. They were concerned then about the impact on the environment and infringements on indigenous peoples, citing “a cry of justice” that “rings out today from the Native Peoples who inhabit the Canadian North.” In 2009, a public letter denouncing the environmental effects of oil sands development and seeking a moratorium on the effort was issued by Bishop Luc Bouchard, then the bishop of the Diocese of St. Paul, where many of the oil sand extraction sites are located.

Prior to its rejection, Catholics voices were raised against Northern Gateway, which would have run through the Green Bear Rainforest, a significant conservation zone. Kairos, an interfaith justice organization, wrote a primer on the pipeline informing local congregations about the project, and the Canadian Religious Conference, which represents 19,000 women and men religious, formally opposed the pipeline.

Mr. Buttrey also praised the rejection of Northern Gateway. He says while acknowledging the ecological ramifications of oil sands extraction is important, attention to the rights of indigenous people is also essential. “One of the ironies of these pipelines is that even though they're important for the Albertan economy, they quickly go out of Alberta to other provinces or even to another country, like the U.S. It's often indigenous people in other provinces or countries that are lobbying their governments” to halt such projects, he says.

In British Columbia, the Coldwater Indian Band, the Tsleil-Waututh Nation and the Squamish Nation have offered legal challenges to the Kinder Morgan pipeline, and the Assembly of Manitoba Chiefs are challenging Line 3. Canadians are talking about organizing protests to oppose the domestic pipelines modeled on those by the Standing Rock Sioux against the Dakota Access Pipeline (DAPL) in the United States.

Canadian Catholics have been standing with indigenous people against oil projects, says Sister Tee, at rallies and protests, signing petitions and in “prayer and personal commitment to the care and protection of God’s handiwork.” U.S. Sisters of Mercy provided a model for this kind of engagement by being present alongside other people of faith at protests initiated by the Standing Rock Sioux against DAPL. That controversial project runs near the Standing Rock reservation; tribal leaders have denounced it as as a threat to the tribe’s water resources and its sacred lands. Noting the solidarity between U.S. and Canadian activist groups, Sister Tee has no doubt that “this dedicated commitment” will continue.

Though Mr. Buttrey understands the sentiment of activists, he thinks nothing about how oil is resourced will change until the demand for it is addressed. He argues that the challenges of oil consumption and climate change are global, and they require collective, international solutions. He hopes Canada might be able to provide some creative examples for the rest of the world by thinking about the environment and economy together.

Sister Tee believes direct action can still influence energy policy and remains confident the new pipelines “will never be built because of the epic level of resistance that is taking place and will continue to take place.” For her, the overall aim is not just to halt projects which ignore the rights and sovereignty of indigenous peoples but “to prevent dependency on fossil fuel energy that would result in a further delay in development of alternative sources of energy.”

As Mr. Trudeau and Mr. Trump express a desire to collaborate on issues of energy and the environment, they may be forced to contend with renewed calls for accountability from activists like Sister Tee and citizens like Mr. Buttery. Whether they will also respect the rights of indigenous people, which “Laudato Si'” says “are not merely one minority among others, but should be the principal dialogue partners, especially when large projects affecting their land are proposed,” remains to be seen.

Given the US media's almost total ignoring of our neighbor to the north, I was very pleased to see this informative article. My only comment is that the title suggests Canadian Catholics standing alone against the forces of Big (Alberta) Oil, and it would be helpful to have a bit more about their relations to the larger Canadian environmental movement.

You would think that Canadian Catholics would be more interested in matters which aren't subject to the concept of "prudential judgment". Trudeau is pro-abortion and pro-euthenasia.

Oil sands offer one of the dirtiest forms of petroleum. It is a resource that should be utilized last - only in the event that we are unable to switch to clean and green sources of energy. It is discouraging that we are not emphasizing movement forward in our energy sources. Regressing to an emphasis on petroleum is related to the people who control that resource. Solar energy is generated locally, and could be generated by anyone who owns a house. Individual homeowners are unlikely to contribute a lot of money to buy politicians - and that is why we are stuck in reverse on energy policies.