The Quebec Mosque shooting was a ‘wake up call’ for Canadians 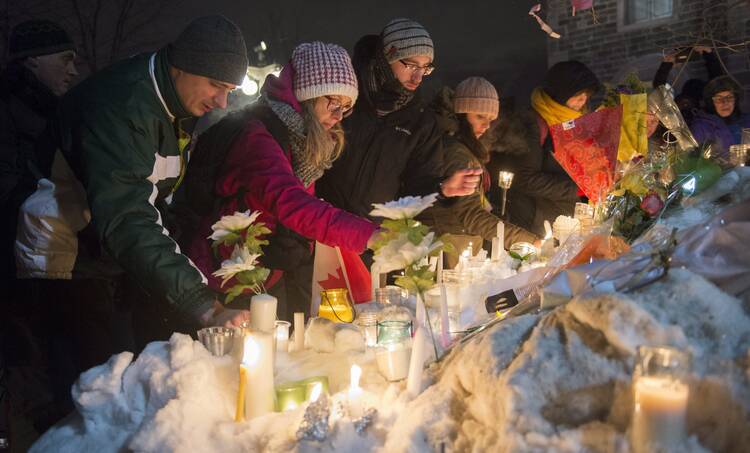 A vigil in Quebec City onJan. 30 for victims of Sunday's deadly shooting at a Quebec City mosque. (Paul Chiasson/The Canadian Press via AP)

Canada is struggling to make sense of its identity and commitment to plurality in light of a shooting at the Quebec City Islamic Cultural Center on Jan. 29. Political and religious leaders have expressed condolences and solidarity across the country, but some are left wondering if the attack, according to police perpetrated by 27-year-old French Canadian Alexandre Bissonnette, reveals something deeper amiss with Canadian society.

The Quebec shooting occurred the day after Mr. Trudeau’s tweet went viral. While Canadian Muslim communities grieve and regroup, the violence has other Canadians rethinking how Muslims are treated and perceived in Canada.

Mr. Jonathon Reed, an educator and activist, said many Canadians, responding to Mr. Trudeau’s sentiment, at first applauded themselves for what they saw as a welcoming attitude in Canada toward Muslims and refugees. That applause is gone. A tangible “proud to be Canadian mood” was “viscerally shattered” the night of the shooting, he said.

Restore your faith in humanity with the #WelcometoCanada campaign.
Jim McDermott

In the aftermath, Canadian policies concerning refugees have been highlighted at protests and vigils, bringing new scrutiny to the policies of the Trudeau government, like the newly controversial Safe Third Country Agreement. Under that 2004 agreement, asylum seekers must file their asylum claims in the country of their arrival. That would require Canada to send back any claimants entering Canada via its land border with the United States based on the now-challenged premise that the United States is a safe country in which to make an asylum claim.

The New Democratic Party called for an emergency debate in the House of Commons over how Canada should respond to Mr. Trump’s executive order. Many members of the N.D.P. described it as racist and suggested Canada should take in more refugees from the seven Muslim-majority countries targeted by the order. The Liberal Party said there would be no change to the present refugee target numbers.

“I'm horrified by the shooting, like everyone else. There’s shock and surprise that in Canada there are people Islamophobic enough to do something like this,” said Ronald A. Kuipers, director of the Centre for Philosophy, Religion, and Social Ethics. “It’s a wake up call.” Asked about how the public is responding to that call, Dr. Kuipers responded cautiously. “It's very easy to condemn a mass shooting, and it’s a lot harder to ask, How welcoming are we as a polity?' Events like this should get us to ask ourselves these kinds of questions.”

Watching social media after the shooting, Mr. Kuipers said he saw a lot of people urging Canadians to celebrate the nation’s diversity. “I wonder if they really know what it means to actually do that,” he said, “to allow more agony into the public sphere, more disagreement, more potential for strife but also potential for deeper conversation and deeper dialogue.”

Mr. Kuipers has recently been working with refugees for a research project on refugee resettlement and communities of faith in Canada. In that context, he has heard many horror stories about how refugees are treated by the state, and he sees cultural biases against Muslim communities. Canadian society, Mr. Kuipers said, is often suspicious of religion when it becomes a public voice. “Someone’s faith isn’t something they can peel off and leave behind when they enter the public sphere,” he said, “and we need to have a public sphere in which there is deep dialogue, where you can come as your whole, entire person, including your faith orientation or your religious beliefs.”

Creating that space for dialogue means also thinking carefully about how people like Alexandre Bissonnette become violent. Mr. Kuipers suggests asking questions like “what kind of resentments and fears lead people into adopting such an extreme philosophy?” It also means, he said, examining how prejudices are formed both in Quebec and in Canada as a whole.

Efforts have already been made in Quebec to understand the barriers to pluralism there. In 2008, the Bouchard-Taylor commission, prepared by sociologist Gérard Bouchard and philosopher Charles Taylor, provided a variety of recommendations and analyses of attitudes toward pluralism in Quebec, but the report was “basically shelved, and the recommendations weren’t pursued,” Mr. Kuipers said. While Quebec has a unique history related to efforts to preserve its own cultural identity, he emphasized that Islamophobia and white supremacist groups are present in Canada. “There's a nationalism in the rest of Canada,; there’s a different kind of nationalism in Quebec,” he said.

But while the nation’s identity problems run deep, there are signs of hope. A lot of private sponsorship groups for refugees are interfaith, Mr. Kuipers said. The day after the attack, on Jan. 30, Canada was lit from coast to coast by vigils honoring the six dead and 19 injured.

Mr. Reed attended the vigil in Kingston, Ont. “It was pretty incredible to see many hundreds of people gathering at city hall on a very bitterly cold night,” he said. Local speakers shared prayers and stories about their connections to those directly affected by the Quebec shooting. Reflecting on the general theme of the vigil, Mr. Reed said, “There was a determination to beat hate with love and to meet that hatred with resilience and a commitment to diversity.”