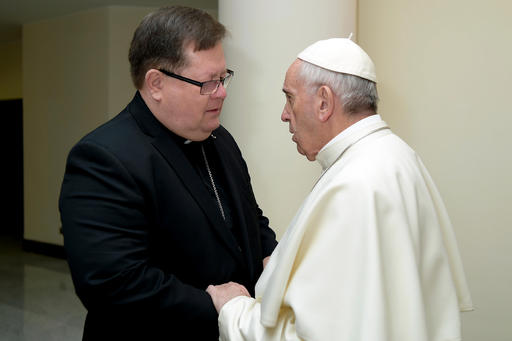 Pope Francis talks to archbishop of Quebec, Cardinal Gerald LaCroix, as they meet at the Santa Marta residence, at the Vatican Monday, Jan. 30, 2017. (L'Osservatore Romano/Pool Photo via AP)

Pope Francis has “firmly condemned” the terrorist attack on a mosque in Quebec City last evening. He prayed for the six dead and eight wounded and emphasized “the importance that Christians and Muslims remain all united in prayer in such moments,” the Vatican stated today.

He expressed his condolences for all the victims in a message to the cardinal-archbishop of Quebec, Gerald Cyprien Lacroix, who happened to be in Rome. The Vatican said he spent some time with the cardinal after Mass at Santa Marta this morning. The pope “assured him of his prayers for the victims” of this attack and “underlined the importance of Christians and Muslims being all united together in prayer in such times.” The cardinal returned to Canada immediately after meeting Francis.

In his message, which the Vatican released this afternoon, Pope Francis “entrusted to the mercy of God the persons who had lost their lives” and “associated himself in prayer in the suffering of those close to them.” He expressed his “deep sympathy for those injured and for their families” and prayed, too, for all who are assisting them, asking the Lord to grant them “comfort and consolation in this trial.”

He “firmly condemned yet again the violence that causes such suffering, and implored God for the gift of mutual respect and peace,” and, at the same time, he invoked God’s blessing “on all those touched by this dramatic situation and on all the people of Quebec.”

For its part, the Pontifical Council for Interreligious Dialogue—which conducts the Vatican’s relations with Muslim organizations worldwide—also “firmly condemned this act of unprecedented violence.” In a press statement it expressed “profound sadness and indignation of this ferocious attack against Muslim believers who were gathered in prayer in their place of worship in Quebec City.” It denounced this “senseless act” for having “violated the sacredness of human life and the respect due to a community in prayer, as well as the place of worship which welcomed them.” It concluded by extending its “full solidarity to the Muslims of Canada, and assured them of its fervent prayers for the victims and their families.”