The US plan for Iraq killed thousands—and created ISIS. What does that mean for Syria? 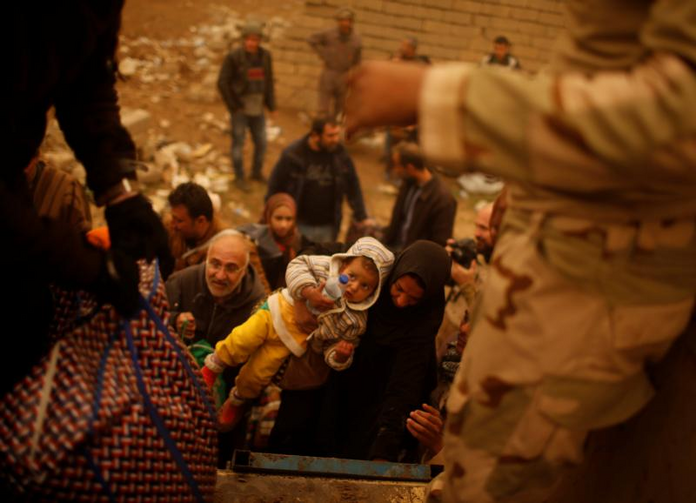 Nowhere has the law of unintended consequences been more in evidence than in what has followed the U.S. military attacks on Iraq, Afghanistan, Libya and now, indirectly, Syria. The U.S. invasion and occupation of Iraq caused a “blowback,” with untold thousands of terrorists, many willing to blow themselves to pieces in a vengeful cause. Trying to impose the United States’ will on Iraq (and now Syria) took a deadly toll, killing hundreds of thousands of civilians, destroying much of modern and ancient Iraq, sending into exile millions of refugees—and created ISIS.

Blowback has a history. Osama bin Laden, in his “Letter to the Americans” in October 2002 attempting to justify Al Qaeda’s violence, lists as the first reason the U.S. support for Israel: “You attack us in Palestine.” Ongoing humiliation of the Arab Mideast dates to the secret Sykes-Picot agreement that drew artificial boundaries in Arab lands following the demise of the Ottoman empire. Meanwhile, U.S. attacks on Muslim countries resulted in the emergence of terrorist groups determined to throw off the vestiges of imperial (or “crusader”) conquest.

In ISIS: A History, Fawaz A. Gerges, professor of contemporary Mideast studies at the London School of Economics and Political Science, has produced a remarkably clear and detailed taxonomy of ISIS. “ISIS [the Islamic State of Iraq and Syria] can be seen as an extension of AQI [Al Qaeda in Iraq], which was itself a creature of the 2003 U.S.-led invasion of Iraq and its aftermath.” Both organizations emanated from “the global Salafi-jihadist movement,” an Islamic fundamentalism “which aims to replace state sovereignty with God’s rule.” “Coming out of relative obscurity,” he observes, “by the end of 2014, ISIS had captured approximately a third of Syrian and Iraqi territories and had edged closer to the Iraqi-Jordanian-Saudi Arabian frontiers….”

The principal leaders of ISIS have been Abu Musab al-Zarqawi, who was killed by U.S. bombs in 2006, and Abu Bakr al-Baghdadi, who took control after a brief interval. Both men developed from unimpressive figures into the most powerful leaders of any terrorist group. Both had served time as political prisoners, where their fanaticism was aroused; and both contrived an ideology of savagery—videotaped executions of beheadings and burnings—as propaganda tools for terrorism.

By the time Zarqawi was killed, he had lost the support of many Iraqis because of his extreme cruelty. His ultimate successor, Baghdadi, succeeded in restoring ISIS and made large gains in Iraq and Syria. ISIS has shown an “unprecedented ability to recruit and radicalize followers through social media that stems from its display and exhibition of military prowess and success on the battlefield.”

In assessing the future of ISIS, Gerges points to its loss of territory since its peak period. It has lost 40 percent of its Iraqi territory and is losing ground in Syria. He believes that ISIS will eventually collapse, even though it has “a seemingly endless stream of recruits,” “nearly thirty thousand from more than one hundred countries since 2011.” “The group can maintain itself…only in an environment of despair, communal polarization, state breakdown, and war,” and its “strategic miscalculations and shortsightedness know no limits and do not bode well for the group in the long term.”

In Black Flags: The Rise of ISIS, Joby Warrick, a prize-winning journalist for The Washington Post, presents a gripping account of the origins and development of the Islamic radical movement that became ISIS. In contrast to Gerges, he dramatizes his account with details of terrorist acts and personal portraits of the central figures. Much of the book details the exploits of Zarqawi and Baghdadi. Whereas Gerges devotes a chapter to Zarqawi, Warrick makes him a central character for half the book, interspersing his exploits with White House thinking. Alongside the picture of Zarqawi’s growing insurgency Warrick juxtaposes a meeting of President Bush and the visiting King of Jordan, telling Abdullah, “I don’t want people to think twenty years from now that I chickened out on confronting” Saddam.

After the U.S. invasion of Iraq, when President Bush assured reporters that “Iraq is more secure” and Secretary of Defense Donald Rumsfeld enthused about “extraordinary” progress there (“Baghdad is bustling with commerce”), Zarqawi was orchestrating assassinations, bombings and killings. Months passed before the White House would acknowledge that an “insurgency” was underway and “was not only real, it was winning.” Despite a report from a C.I.A. specialist and a warning from King Abdullah, Paul Bremer, Bush’s appointee in Iraq, had refused to stop looters and, more important, had outlawed the ruling Baath Party and dissolved Iraq’s military. “If Abu Musab al-Zarqawi could have dictated a strategy for Iraq that suited his own designs for building a terrorist network, he could hardly have come up with one that surpassed what the Americans themselves put in place over the spring and summer of 2003,” Warrick writes.

Warrick’s hawkish leaning emerges most clearly in dealing with Syria. His subtle rhetoric gradually makes a lodestar of the seasoned Mideast diplomat Robert Ford, and pits him against the forces of ISIS and the person of Syria’s President Assad. Assad is invariably the “brutal Assad” and regularly named in conjunction with his father, about whose brutality there is no question. Warrick distinguishes him from his father, but that distinction pretty much evaporates in the narrative.

Warrick’s discussion of Syria expresses a view similar to Washington’s neocon foreign policy establishment. He cites incidents that have been repeatedly highlighted in the press as illustrations of Assad’s “brutality” and in the same misleading terms. He invariably presents the Syrian “protesters” as frustrated, but whose violence is limited to things like overturning cars, as in Daraa. When the “police” fire on a mob in Daraa in March 2011, he writes, they use “live ammunition, killing fifteen.” Like the mass media, he omits the relevant fact that seven of those killed were police. This additional information changes everything about the incident.

Warrick repeats the ongoing media claim that the Assad forces made a “chemical-weapons attack on civilians in Ghouta,” supposedly crossing President Obama’s “red line” that would demand a military response. But that sarin gas claim has been debunked. A lead U.N. investigator, Carla Del Ponte, countered that the evidence pointed toward the rebels as using gas, not Assad’s people. Obama failed to live up to his “red line” promise, Warrick insinuates. Yet it seems fairer to think that Obama was less worried about being called “chicken,” in contrast to Bush, than in refusing to act rashly and on the basis of questionable reports. Such repeated examples of misinformation are crucial to situating Warrick’s point of view. ISIS does not come into existence for nearly 250 pages, which retrospectively seem to make an implicit justification for a hawkish attitude toward Syria.

Warrick juxtaposes details of Baghdadi’s horrors with White House dithering in contrast to Ford’s resoluteness in support of so-called “moderates” and his impatience with Washington’s inaction. It is a rhetoric designed to align readers with Ford’s frustration and his call for more U.S. military assistance toward “regime change.” Warrick appears unmoved by the fact that Assad did not start this brutal civil war or that regime change in Syria could easily be followed by the same disasters now prevalent in Iraq and Libya.

Tim Anderson’s The Dirty War on Syria takes a contrary view. Entire chapters offer alternative views to what has been widely reported about Daraa, barrel bombs, the Houla massacre and the use of poison gas. Anderson, who teaches political economy at the University of Sydney, challenges media distortions and bias in statements from Amnesty International and Human Rights Watch. Anderson singles out Kenneth Roth, the director of Human Rights Watch, for purporting to show gruesome pictures of Syrian civilian deaths by “dishonestly using photos of Gaza and Kobane (after Israeli and US/ISIS bombing…).” Russia is hardly the only country disseminating inaccurate information. Both media and human rights organizations fail to point out that U.S. support of efforts to overthrow the legal government of Syria violates the U.N. Charter and the International Bill of Rights. Covert C.I.A. aid to Syrian rebels is flat-out illegal.

The United States has “demanded liberalization of Syria’s economic policy [i.e., more capitalism] and covertly supported discontent in Syria years before the protests and war.” “In this dirty war,” Anderson writes, “the foreign powers have not been direct belligerents, mostly acting as funders, trainers, and arms suppliers to their proxy Islamist armies.” Israel profits from a weakened Mideast, and in a special way by continuing illegally to occupy Syria’s Golan, from which Israel now gets 30 percent of its water. The United States has insisted that Assad must go as a precondition for a negotiated settlement. But that is not a basis for negotiation; it is a demand for surrender.

Anderson expects that Assad’s government will prevail over “NATO and Gulf Monarchy-sponsored multinational terrorism,” and if so it will mean “an end to Washington’s bloody spree of ‘regime change’ across the region, from Afghanistan to Iraq to Libya to Syria.”

This article also appeared in print, under the headline “Blowback,” in the November 7, 2016, issue.

Jerome Donnelly, since his retirement from the University of Central Florida, has taught occasionally in the university’s international studies program. He originated and co-authored Human Rights: A User’s Guide.