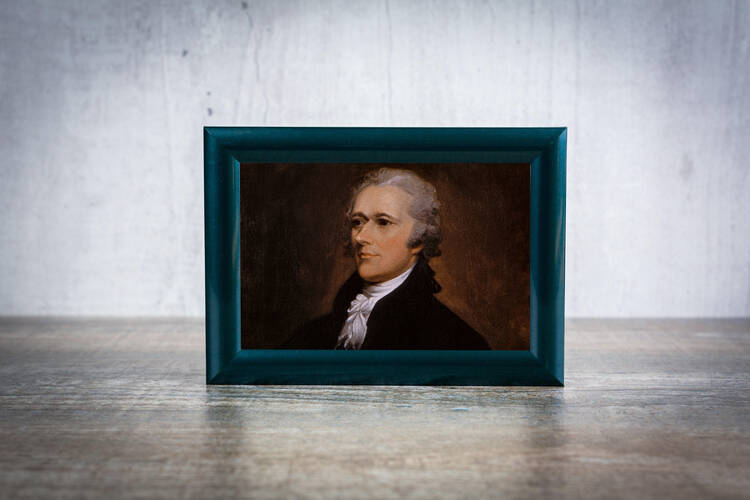 Alexander Hamilton—the founding father of the moment thanks to the hit musical based on his life—is generally not associated with the cause of religious freedom in the United States. Among Hamilton’s contemporaries, that honor is usually reserved for one of his great rivals, Thomas Jefferson, the author of the Virginia Statute for Religious Freedom. But it was Hamilton who vigorously defended the political rights of Catholics in New York in the face of efforts to require them to renounce their religious identity before they could be considered full citizens of the new republic.

This came in the late 1780s, at a pivotal moment in the founding of the United States. The Catholic Church in New York had been outlawed for nearly 100 years, its members denied not only religious liberties but political and civil ones as well. Catholics in the Anglo-American New World could not be trusted with essential liberties, ran the justification for these restrictions, as their primary allegiance was presumed to be to the pope, who, among other claims to power, was said to assume the authority to dispose secular rulers.

Alexander Hamilton was not always a defender of Catholics. After coming to New York City in 1774 from the West Indies as a young man, he plunged into the escalating crisis between Britain and its North American colonies. Joining the patriot cause, he denounced the Quebec Act, in which Britain recognized the pre-eminent position of the Catholic Church in Canada and allowed officeholders to take oaths without renouncing their allegiance to the papacy. Hamilton wrote in 1775 of the British: “If they had been friends to the Protestant cause they never would have provided such a nursery for its greatest enemy.”

It was Hamilton who vigorously defended the political rights of Catholics in New York in the face of efforts to require them to renounce their religious identity before they could be considered full citizens of the new republic.

One unexpected consequence of the American Revolution, however, was a new acceptance of Catholicism in the emerging republic. As an officer and aide to George Washington in the Continental Army, Hamilton himself fought alongside Catholics, who were welcomed into the ranks. Immediately after the war, he served in the Continental Congress with the Catholic delegates Daniel Carroll of Maryland and Thomas Fitzsimons of Pennsylvania, both of whom shared his belief in the necessity of a strengthened national government. Those experiences helped to bring Hamilton to a more mature position regarding the alleged Catholic threat to the United States. Americans in the centuries since have also found that working with those of other religions and faith traditions in the service of a common goal could produce a more genuine pluralism.

Hamilton was elected to the lower house of the New York Legislature, the Assembly, in 1786, representing New York County, or Manhattan, for a one-year term. Along with others who had served in national institutions during the War for Independence, Hamilton was becoming alarmed by tendencies in the state legislatures toward what he feared would become the disintegration of the fledgling United States. He came to oppose a faction in the New York Legislature for what he saw as their narrow vision of the new American nation, one that would inevitably crush the rights of minorities in the name of the people. Many in that faction belonged to rural, independent churches and were deeply suspicious of hierarchies, both religious and otherwise. Their leader was the longtime governor George Clinton, a champion of small farmers and an opponent of New York’s landed and merchant class. They also formed the core of a formidable Anti-Federalist party in New York that would oppose the U.S. Constitution that Hamilton helped craft and that he signed in Philadelphia in 1787. That document expressly prohibited any religious test for office, and some anti-Federalists opposed it for this very reason, decrying the possibility that not only Catholics but Jews, Muslims and members of other religious minorities might someday claim the highest offices in the land.

As an officer and aide to George Washington in the Continental Army, Hamilton himself fought alongside Catholics, who were welcomed into the ranks.

When the forerunners of the Anti-Federalists in New York sought to pass a law in January 1787 requiring all voters to renounce their allegiance to “foreign ecclesiastical authority,” Hamilton rushed to the defense of Catholics, the clear target of the legislation. If enacted, this would have in effect re-established the exclusion of New York Catholics from politics that had prevailed since the 1690s. Hamilton and others from New York City—where the state’s first Catholic Church, St. Peter’s, was opened in 1786 after the ban on the open practice of their religion by Catholics had been lifted—denounced the bill as nothing short of religious bigotry. He argued that forcing Catholics to renounce their connection to the papacy would needlessly and foolishly weaken their bonds to New York and the United States. Hamilton also dismissed fears of Catholics as being based on centuries-old perceptions. He asserted that New York Catholics of the late 18th century were “unencumbered with that dangerous fanaticism which terrified the world some centuries back, but which is now dissipated by the light of philosophy.” Hamilton had struck a blow not only for Catholics but for members of all religious communities deemed by some to be suspect and outside the authentic political community. That lesson has resonated down through the centuries, including in this volatile election year of 2016.

A backstage look at Hamilton, the musical phenomenon
Ciaran Freeman

The bill was defeated, but this being a story of New York politics, there was no simple ending. In the following year, 1788, with Hamilton no longer in the New York Legislature, Anti-Federalists enacted a law requiring all would-be state officeholders to swear an oath similar to the one Hamilton had helped rebuff. When that measure was repealed in 1806 by a group of Republicans led by another Clinton (DeWitt), Hamilton had been dead two years, gunned down in the most infamous duel in American history. The Federalist Party he had helped to found had now come to fear Catholics and immigrants, and they unsuccessfully opposed this reform, as did a faction of nationalist and nativist Republicans. The latter group had originally coalesced in the 1790s around another charismatic and ambitious New York lawyer. His name? Aaron Burr.

Jason K. Duncan is author of Citizens or Papists? The Politics of Anti-Catholicism in New York, 1685-1821 and is a professor of history at Aquinas College in Grand Rapids, Mich.

Jason K. Duncan is author of Citizens or Papists? The Politics of Anti-Catholicism in New York, 1685-1821 and is a professor of history at Aquinas College in Grand Rapids, Mich.

Show Comments (
2
)
Comments are automatically closed two weeks after an article's initial publication. See our comments policy for more.
William Rydberg
6 years 1 month ago
In my opinion, this is a white wash of aspects of early American History which does a disservice to American Catholics that desire a more historo-critical version. Speaking from a Canadian perspective, it's clear that the historical record shows that French Catholic Quebec wanted nothing to do with American Independence. Familiar as they were about the sufferings of Catholics in many US Cities. In fact, French Canadians fought valiantly during the Invasion of Canada (War of 1812). And one would never have expected the advantages to French Canadian Catholics in the Quebec Act from Congress. Another elephant in the room is the Louisiana Teri tories belonging to Catholic France, not to mention the possessions of Catholic Spain. Bottom line, things were more "complicated" with respect to Catholics than you are letting on. And I have not mentioned Irish Catholics that were a minority among the Irish in America. Very complex indeed! No mention that Christmas and Easter as well as public display of the crucifix was problematic (esp. in New York City). It doesn't help American Catholics get an accurate picture of early Catholic American History if one soft-soaps the history in my opinion.. The history of civil rights for Catholics in Maryland is particularly interesting (Hamilton was from there), and one could go on... in Christ,
Beth Cioffoletti
6 years 1 month ago
Mr. Ryberg, I am directly descended from the earliest Catholics of Maryland (Hamiltons included) and particularly interested in this history. Mid 1600s to mid 1700s. If you have resources and information, please contact me privately. bqueen427@gmail.com Thank you.