From Rags to Revolutionary: ‘Hamilton' tells a true American story 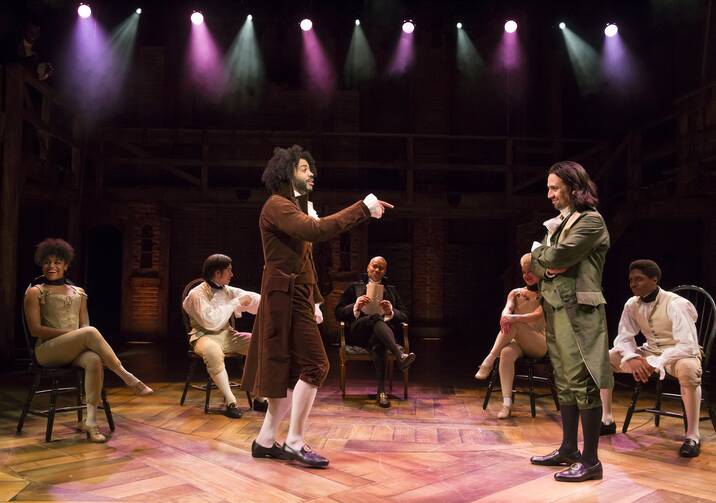 Depending on when you date its birth, it took rock music as much as a decade and a half to move from the pop charts to the Broadway stage, with 1968’s “Hair.” Hip-hop has been with us nearly twice as long—at least 30 years, if you measure by mainstream success—and as such is long overdue for its own stage musical moment, not least because rap, even more than rock, is a natural narrative form.

That moment has arrived, definitively, with the sensational new musical Hamilton, which, like “Hair,” is getting its Off-Broadway start at New York’s Public Theater, in a hotly anticipated run that has been extended through May 3. It is unlikely to wait long for a commercial Broadway transfer. As surehanded a piece of musical storytelling as has been seen onstage in many a season, “Hamilton” is all the more impressive for tackling a supremely unlikely subject: the founding of the United States as seen through the eventful life of one its less lionized figures, Treasury Secretary Alexander Hamilton. But creator Lin-Manuel Miranda—who wrote the music, lyrics and book, and stars in the title role—makes a convincing case for Hamilton, the “ten-dollar founding father without a father,” as the first of a distinctly American type: the immigrant outsider of humble beginnings who remakes, and ultimately undoes, himself with sheer chutzpah and hustle.

It is an angle on the nation’s creation myth that, like Hamilton’s, is both expansive and pragmatic: This is a country where freedom would have a chance to reign like never before, but only if the heavy lifting of governance was met with the same fervor as revolution had been. “Dying is easy, young man/ Living is harder,” Gen. George Washington (Christopher Jackson) tells the impetuous, battle-hungry Hamilton when he enlists him as his wartime consigliere. Later, amid the squabbling of his cabinet, President Washington echoes the line: “Fighting is easy/ Governing is harder.” It is a timely message for our age of gridlock and retrenchment, in which debates over the size and role of government have if anything only intensified.

Hamilton’s story is a dramatic one; it is remarkable it has not yet been given a film or stage treatment. Born out of wedlock in the West Indies and orphaned at 11, he was clerking for a trading charter by age 14. By age 17, with donations from well wishers who could sense his promise, he was on a boat to New York City, just in time for the budding American Revolution. He rose quickly in both society and the nascent U.S. government on the strength of his searing intelligence and indomitable will; his aptitude for statecraft and financial wizardry, which gave the United States its first central bank, were matched only by his talent for making enemies.

Also to be weighed on Hamilton’s balance sheet: He was a staunch abolitionist. And though not exactly a womanizer, he had a pronounced weakness for feminine charms, and was embroiled in the new nation’s first extramarital sex scandal. He also never quite tamed his touchy temper, which surely contributed to his famous end by Aaron Burr’s pistol, in a needlessly petty duel that followed his own 19-year-old son’s death in a similarly avoidable exchange.

Miranda picks up the story in 1776, with revolution already underway, and rifles through both the biography and history deftly, from battles to early congressional debates, as well as domestic scenes. If these don’t sound like the makings of musical theater magic, fear not: “Hamilton” doesn’t just have some of densest yet sharpest lyrics, many delivered in dazzling, rapid-fire raps, since the heyday of Stephen Sondheim. It also has a sumptuous, sinuous R&B/pop score that seamlessly weaves rapping, singing and recitative into a nearly nonstop musical quilt. Miranda, onstage a slight, endearingly nebbishy underdog figure with a raspy rap timbre and only an adequate singing voice, accordingly gives some of the show’s strongest material to others. Daveed Diggs has a showstopping entrance as a rakish Thomas Jefferson, newly returned from France, and Leslie Odom Jr.’s strikingly sympathetic Aaron Burr has a series of memorable songs delineating his envy, ambition and love. The women in Hamilton’s life—his wife Eliza (Phillipa Soo) and her sister Angelica (Renee Elise Goldsberry), with whom he was equally smitten—have strong roles in an otherwise male-dominated tale, with a three-song sequence in the first act that handily covers New York’s centrality to history, Hamilton’s courtship of Eliza, and Angelica’s regret that she wasn’t its target. King George III (Brian D’Arcy James) even steals a scene or two with a catchy don’t-leave-me ditty.

How does all the pop-millennial attitude square with the corseted period drama? Remarkably smoothly, thanks in part to director Thomas Kail’s inventive, “Les Miserables”-inspired staging and Andy Blankenbuehler’s tireless choreography, much of it performed by a large chorus of singer/dancers who strut and swirl around the leading players. The costumes, by Paul Tazewell, are straight-up Colonial, but only up to the neck; the hairstyles onstage, like the score, are defiantly 21st-century, from spiky blonde to nappy curls.

That the cast of “Hamilton” is mostly nonwhite, in fact, is neither commented on nor particularly earth-shattering. But it does speak to our almost-post-Obama moment with a bracing authority, not least because, as told by Miranda, Hamilton embodies both the promise and peril of what he would have called Federalism and we might call Big Government liberalism: If we are bound together as each other’s keepers, not in some vague communitarian idyll (a la Jefferson) but as financially interdependent players with real skin in the game, does that enhance human flourishing and freedom or reduce us to interest groups dependent on government largesse?

This still-ongoing debate, as Americans of color might remind us better than anyone, is hardly academic; it has flesh-and-blood stakes. Our nation’s policies regarding debt, welfare, immigration and foreign intervention, not to mention the disgraceful legacy of slavery, have always had real, quantifiable winners and losers, and the cast of “Hamilton”—again, without having to drive the point home—helps remind us that our nation, born in protest by young people of high ideals, has been on the right side of history only when it has honored those ideals and fought hard to uphold them.