A backstage look at Hamilton, the musical phenomenon 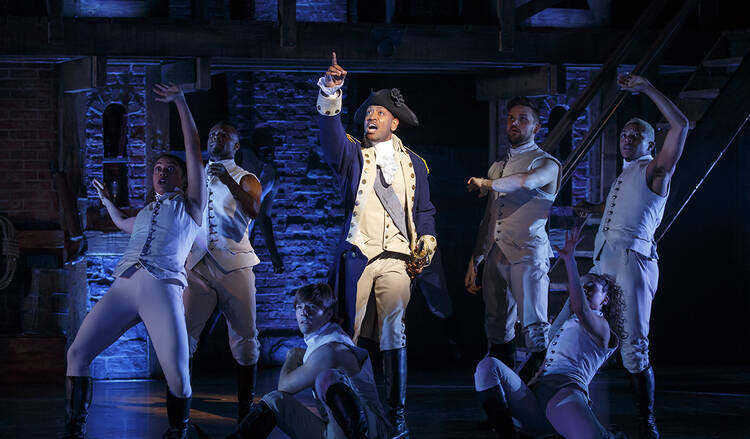 On May 12, 2009, Lin-Manuel Miranda stepped on stage to perform at the White House Poetry Jam in front of President Barack Obama and First Lady Michelle Obama. When Miranda told the audience that he was working on “a concept album based on the life of somebody I think embodies hip-hop, Treasury Secretary Alexander Hamilton,” they laughed. Few could have predicted the phenomenon that entered the world that evening, 10 years ago.

In January 2015,  previews of the play about the revered, star-crossed founding father began at The Public Theater in New York, before moving to Broadway that August. The show has since won 11 Tony Awards, celebrated more than 1,500 performances on Broadway, toured the country, built its own merchandise shop with a storefront in Times Square and even inspired an interactive museum exhibition in Chicago, “Hamilton: The Exhibition.”

To understand how this all came to be, I met with the “Hamilton” stage manager, Amber White. Entering the theater through the side door on West 46th Street and shuffling through the tight backstage quarters past cast and crew, we made our way down into the recently renovated Richard Rodgers Theatre. In the plush red velvet seats we sat down to talk about the show, what it is like to be a part of this international phenomenon and what Ms. White hopes the audience leaves with after seeing “Hamilton.” This interview has been edited for length and clarity.

Ciaran Freeman: It’s been ten years since Lin-Manuel Miranda performed at the White House. When did you become involved in “Hamilton”?

Amber White: Back when Lin was at the White House, we were doing a show called “In the Heights” here in this theater. It was a tight knit group of people. At that time, Lin wasn’t Lin. And the work wasn’t a phenomenon. We knew that we had something special that we were all working on, but the world didn’t know that, yet. This was a year prior to the White House performance. Lin had put in for a vacation. He read Ron Chernow’s book [Alexander Hamilton] on that vacation... that kind of planted this seed. Then he started working on material from it. We were still here doing “In the Heights” when he did the performance at the White House with Alex Lacamoire.

I actually remember us watching that performance on our laptops at that time and thinking, “Wow, this is something.” It’s so interesting for us to look back to see where Lin was then and how much he’s grown. The same is true for all of us.

How Alexander Hamilton defended the rights of Catholics in a young America
Jason K. Duncan

What is the day-to-day work of a stage manager at “Hamilton” like?

So, there’s no definition. I’ll start with that. Everybody can define it a little bit differently. Our general job is to uphold the creative intention of the show on a day-to-day basis and work collectively with the people in the building and with upper management to keep it running.

There are many stage managers on a show. This show has three. Some shows have more, some shows have less, depending on what the needs are. I have a very good relationship with our other two stage managers and we work in tandem. I believe in living a very good work life balance. So we’re not always here all the time and we can take turns with things.

Generally I’m on the phone a lot throughout the day. I’m answering text messages or answering emails. A lot of what I do is just the ins and outs of the show. There are 40 actors in the show, so it’s dealing with injuries and sicknesses and vacations and family traumas and whatever is happening. I’m also always looking at the trajectory of what’s coming up.

The overall feeling of the building is something that I keep in tune with. It’s about making sure that spark is onstage. We on “Hamilton” are very lucky to have a great creative support staff. We have a resident director, a resident choreographer and music director who can help feed [the cast] artistically. And then equal to that, they have to make sure that they want to walk in the door. If they don’t want to walk in the door anymore, they’re supported to not do that, to make a different choice. It’s not about happiness, but it is about feeling like you have a supportive environment.

When did you get the sense that “Hamilton” might be something different?

I thought it would be true before it ever happened at The Public. I knew that Lin had been working on it. I was doing other projects and I had a feeling it was gonna be something big.

Jason Bassett was the original production stage manager. He’s now the production supervisor. He and I were doing “The Last Ship” together at the time that it started at The Public. We were not involved then. And I knew that that was a missed opportunity, but we had already connected ourselves to “The Last Ship.” We were excited by it, but I always felt a little sad that we weren’t going to work on “Hamilton.” And I thought, “Oh this, this is a big thing.” And then it was a big thing.

It was like Beatlemania. And we’re a Broadway show, that’s not a hip thing.

Once it came to Broadway, it blew up exponentially. They were very careful not to let it go onto television or let it out into the public before it [was ready]. But it blew up. I still have a video on my phone of the early days when we did “Ham for Ham.” It was a $10 lottery. The whole street was filled. No cars could come true through. It was just all people, a sea of people, block to block from Broadway to Eighth Avenue. It was like Beatlemania. And we’re a Broadway show, that’s not a hip thing. It’s not something that you think of as a phenomenon. I don’t know how it blew up, but anybody who walked in the building felt it. You could feel the energy.

Do you find that is still true?

It’s still true, but it feels more real. I feel like it earns it now every day. Even if you have listened to the cast album, you watch the show and it really takes you on a journey. A journey that I feel is a testament to the original creatives. It actually does withstand time. And it’s a testament to the current creatives, the actors and the people who hold it up every day. It’s a phenomenal piece of art.

Why do you think it resonates with so many people?

I think there’s a truth about it. The fact that it’s our history, it’s American history and U.S. history. History in a way that you haven’t heard before. It shines a mirror up to something in the same way that “In the Heights” did. “In the Heights” was about a neighborhood and family. Even if that’s not your family or your neighborhood, you can relate to that in some way. And I think that has to be true of this show as well. So it opens a door in that way. But we also watch relationships rise and fall. We watch death happen. And you see this hope. It takes you on this long journey in our history.

Personally, history was always my least favorite subject growing up. I was a math nerd. I liked science, reading was enjoyable, but history was not enjoyable to me. But I think this is such a unique experience; you can start to really kind of feel like, ‘Oh, I get it now.’”

A lot has changed since Lin-Manuel Miranda performed at the White House 10 years ago. A lot has even changed in the world since the show has been running on Broadway for the past four years. What is it like to continue doing the same performance over and over again, night after night?

What happens in the real world affects us here. The conversation changes and shifts and also stays the same, in a weird way. As much as something new will happen, there will be a blip in the world and we can find that blip in our history as well.

When the presidency was shifting, there were people who thought that the lyrics in the king songs were changed to make fun of it. They weren’t, you just hear it differently.

Throughout that time—knowing the presidency was going to change and watching it change—made “One Last Time” [the musical number marking the end of Washington’s presidency] so much more meaningful. It made me understand that we have been through so much in America and we will overcome it. We will continue to pass through.

What do you hope that the audience leaves with when they leave “Hamilton” to make that work worthwhile?

I think it’s going to be unique to every person. Whenever I see somebody after the show, they have what we call "Hamilton face." Your eyes are glassy and you don’t know what yet to talk about because so much has hit you.

I hope they’re hit with something that sparks in them.

My daughter was born the day before rehearsals started. So I didn’t start until a couple of months after the show opened. My first day that I came in, Phillip’s death [the death of Hamilton’s son] hit me in such a way that it didn’t hit me when I saw it before, because I didn’t have a child yet. But watching a child die eight times a week and watching the mother’s and father’s experience of that and the “unimaginable,” it constantly hits me.

Whatever we are all dealing with, we continue on. We never lose that, we just walk with it. That’s one of my biggest takeaways from this show. And there’s so many of them.

I hope [audience members] come here and they’re hit with something that sparks in them. And that continues to spark and stay with them.

So that personal connection with the work is what makes it worthwhile?

Hamilton sounds wonderful. Unfortunately we are a middle class family and I could not even afford to take them to the "off Broadway" rendition when it came to our town. It's a shame that ticket prices are so high only the wealthy can afford them. What's even worse is that you make no mention of that in this piece.

Honestly--just buy the CD. I saw the show in Chicago, and while it was fine, it's the music that makes it incredible (and I don't even like hip hop.) Just listen to the CD a few times, and you really get most of what you'd get in the theater.