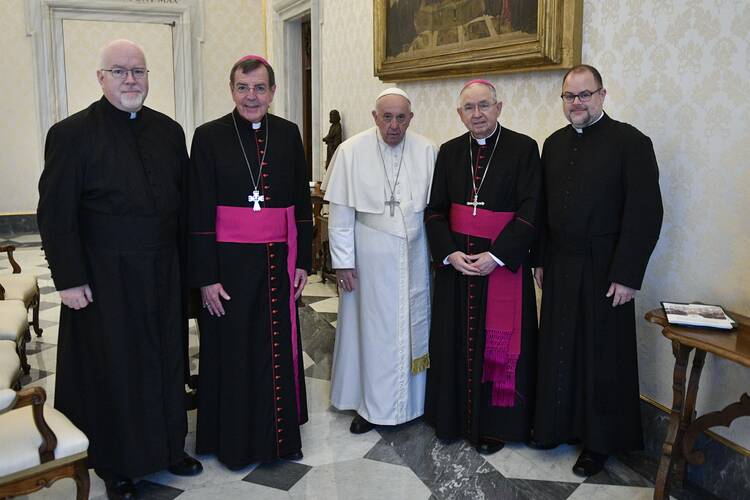 When the U.S. Conference of Catholic Bishops meets in Baltimore from Nov. 14 to Nov. 17 for its annual plenary gathering, the most consequential piece of business is likely to be the election of new executive officers. In elections for president and vice president of the conference, the field is wide open, a development not seen in decades.

There will also be some furniture moves and schedule changes this year.

Out are the classroom-style seating, news conferences and the bishops being talked to for hours on end. In will be a greater emphasis on prayer, “fraternal dialogue” and less formal bishop-media encounters, James Rogers, the chief communications officer for the U.S. Conference of Catholic Bishops, said to Catholic News Service.

In elections for president and vice president of the conference, the field is wide open, a development not seen in decades.

Beyond the election of new officers, bishops are expected to discuss a range of political and ecclesial matters that church observers say could have an impact on the church in the United States far beyond the four-day gathering.

This will be the first meeting of U.S. bishops following the U.S. Supreme Court’s overturning of the Roe v. Wade decision of 1973, a long-time goal of many Catholic activists that continues to drive U.S. politics.

The initial celebratory mood among some bishops in the wake of the court’s ruling has become somewhat tempered following last week’s midterm elections, in which voters in five states, including Kentucky, chose to protect legal access to abortion.

In Kentucky, a reliably Republican state, voters rejected a GOP-backed ballot measure aimed at denying any state constitutional protections for abortion. Among those voting No were 60 percent of Catholic voters, according to VoteCast.

The current vice president of the bishops’ conference, Archbishop Allen Vigneron, called on Catholics in his state of Michigan to engage in prayer, fasting and penance after voters there overwhelmingly elected to place abortion rights in the state’s constitution on Tuesday, the The Detroit Free Press reported. The Catholic Church in Michigan helped fund a campaign against the measure, though its spending was dwarfed by spending from groups supporting abortion rights.

Another church leader, Bishop Thomas Tobin, who heads the Diocese of Providence, tweeted on Wednesday, “Political setbacks will happen, but the Catholic Church will always proclaim the sanctity of human life.”

“The recent midterms are unlikely to change much in the bishops’ discussions,” Stephen White, the executive director of The Catholic Project at The Catholic University of America, told America in an email. “The bishops will remain uniformly committed to defending human life from conception to natural death. They will continue to prioritize the moral and spiritual harm caused by direct attacks on innocent life, particularly through abortion. And most bishops will continue to express concern about the ongoing scandal that many of the greatest political champions of abortion in the United States are Catholic.”

The full meeting of bishops also comes just days after the Vatican official charged with promoting the church’s teaching on life issues said in a newly published interview that Catholic leaders must avoid engaging in ideological debates.

“Look, today what is always important to us is to be really pro-life in a manner that is effective and in no way ideological,” Archbishop Vincenzo Paglia, the president of the Pontifical Academy for Life, told Christopher Lamb at The Tablet. “We’re interested in demolishing—how to say—the ideological prejudices that contaminate reflection, contaminate public opinion. And they prevent broad engagement across the board.”

This will be the first meeting of U.S. bishops following the U.S. Supreme Court’s overturning of the Roe v. Wade decision of 1973, a long-time goal of many Catholic activists that continues to drive U.S. politics.

“Today, the biggest risk is that we don’t know how to listen to each other,” the archbishop said.

Whoever is elected to the U.S.C.C.B. leadership posts could have an impact on how the body of bishops engages the 2024 presidential campaign, which could begin as early as next week if, as expected, former President Donald Trump announces a re-election bid on Nov. 15.

That announcement could come at the same time that the bishops are “expected to decide their approach” to its voter guide, Forming Consciences for Faithful Citizenship, the conference said in a press release. The guide has not undergone a major revision since 2007, which means much of the insight from both Pope Benedict XVI and Pope Francis is not included in the document, which runs more than 17,000 words.

Archbishop José Gomez, the archbishop of Los Angeles and current president of the U.S.C.C.B., has repeatedly criticized President Joe Biden because of his support for abortion rights, dating back to the earliest days of Mr. Biden’s presidency. If Mr. Biden runs for re-election, as he has said he plans to do, it is possible the tension between the bishops’ conference and the nation’s second Catholic president will continue, perhaps by including stronger language about abortion in the voters’ guide.

But some Catholics hope that the guide is updated to include more recent challenges, especially threats to U.S. democracy.

Some Catholics hope that Faithful Citizenship is updated to include more recent challenges, especially threats to U.S. democracy.

In the weeks leading up to this week’s elections, voters in several battleground states, including Arizona and Iowa, received mailings purporting to be official Catholic publications, touting conservative talking points but which church leaders warned had no connection to the church.

Cathleen Kaveny, a professor of law and theology at Boston College, told the National Catholic Reporter’s Brian Fraga that she believes threats to U.S. democracy must be highlighted in an updated version of the document. “I think it’s indisputable that the challenge now is the continuation of our democratic republic,” Ms. Kaveny said.

It is possible that any heated conversation about how to engage difficult political questions will not be visible to the press. The bishops are expected to conduct much of their business in executive session, as they did in 2021.

Last year’s meeting was preceded by months of speculation that bishops might lay the groundwork for denying Communion to some Catholic political leaders. Ultimately, the bishops hammered out their disagreements behind closed doors and adopted a document about the Eucharist that lacked the more adversarial language supported by some bishops.

A former U.S.C.C.B. official wrote that closing off more of the meeting to the public hurts the standing of church leaders with the public and fails to live up to the church’s vision set out by the Second Vatican Council that calls for ordained and lay leaders to work together.

“Open, honest and full communication is required for the good health of any community,” wrote Russel Shaw at Our Sunday Visitor. “Certainly, that is true in a synodal Church. Secrecy and confidentiality have their place. But unnecessary secrecy cuts leaders off from their people and too easily becomes a tool of manipulation and control.”

“Open, honest and full communication is required for the good health of any community,” wrote Russel Shaw at Our Sunday Visitor.

But some church observers say that regardless of whether the meeting generates much news, it is important for Catholics to pay attention because of a growing rift between the bishops and the rest of the Catholic faithful. The agenda is expected to include discussion of the ongoing synodal process, which Pope Francis recently extended to allow more time for consultation and dialogue between church leaders and the laity.

“The synodal process is an important way that the bishops can restore trust,” Natalia M. Imperatori-Lee, the head of the Catholic Studies Program at Manhattan College, told America. “Can they allow the laity to be the drivers of the synod? Or are they committed to setting the agenda, filtering the responses and curating the ecclesial response to the needs of the people of God?”

Regarding newly elected conference leaders, Dr. Imperatori-Lee said she hopes they look at the concerns of young Catholics for inspiration.

“My hope is that the U.S.C.C.B. leadership elected at this meeting will wholeheartedly embrace the synod process, will work to cultivate an attitude of humble listening in the clergy as a whole and will be particularly attuned to the voices of young activists and Catholics of color working for justice on issues like climate, immigration and gender issues,” she said.

Writing at Commonweal, the theologian Massimo Faggioli said that the upcoming meeting is important because it is demonstrative of a church that is moving beyond bishops, citing specifically the limited resources U.S. bishops have devoted to the synod.

“Signs of an episcopal crisis are obvious: the high number of priests who are chosen to become bishops but who decline the appointment; the number of bishops resigning because of burnout; the cases of bishops quietly removed (and without any transparency, especially for the victims) by the Vatican over accusations or for being found guilty of abuse or cover-up,” Mr. Faggioli wrote.

But more important, he said, U.S. bishops have failed to take up the initiatives put forth by Pope Francis, including a greater call to involve the laity, especially women, in the life of the church and the pope’s focus on creating a synodal church.

“It further translates into a crisis of mission, something that’s become clearer in the course of Francis’s pontificate,” Mr. Faggiloi wrote.

Material from Catholic News Service and The Associated Press was used in this report.