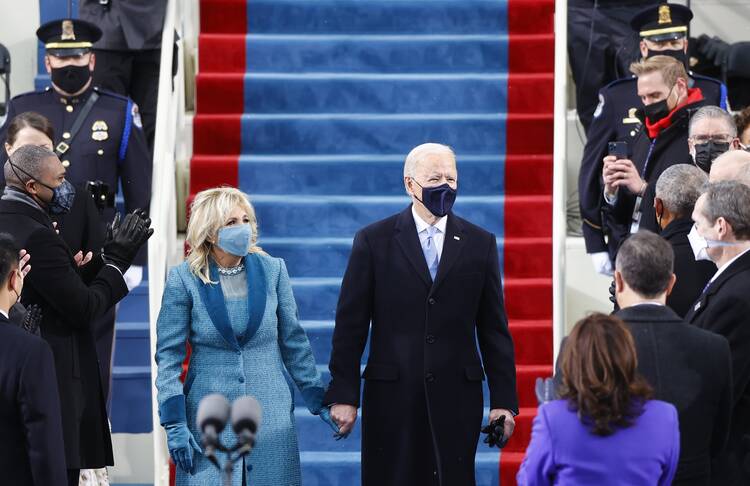 President-elect Joe Biden and his wife Jill Biden are seen at the U.S. Capitol in Washington Jan 20, 2021, before his inauguration as the 46th president of the United States. (CNS photo/Jim Bourg, Reuters)

In a rare public rebuke of the U.S. Conference of Catholic Bishops from one of its members, Cardinal Blase Cupich joined with an unnamed senior Vatican official in taking issue with a stinging statement released earlier today from the president of the bishops’ conference aimed at President Joe Biden’s views on abortion.

“Today, the United States Conference of Catholic Bishops issued an ill-considered statement on the day of President Biden’s inauguration,” Cardinal Cupich said in one of two statements he released today. “Aside from the fact that there is seemingly no precedent for doing so, the statement, critical of President Biden came as a surprise to many bishops, who received it just hours before it was released.”

At issue is a statement issued shortly after Mr. Biden was sworn in as the nation’s 46th president and signed by Archbishop Jose Gomez, president of the U.S.C.C.B. Archbishop Gomez wished the new president well, but he also used strong language in an unusually lengthy statement to condemn the nation’s second Catholic president’s support for abortion rights.

“I am praying that God grant him wisdom and courage to lead this great nation and that God help him to meet the tests of these times, to heal the wounds caused by this pandemic, to ease our intense political and cultural divisions, and to bring people together with renewed dedication to America’s founding purposes, to be one nation under God committed to liberty and equality for all,” Archbishop Gomez said.

But, he continued, “I must point out that our new President has pledged to pursue certain policies that would advance moral evils and threaten human life and dignity, most seriously in the areas of abortion, contraception, marriage, and gender. Of deep concern is the liberty of the Church and the freedom of believers to live according to their consciences.”

Cardinal Cupich, a key U.S. ally of Pope Francis, said that the statement was drafted without input from the conference’s administrative committee.

Cardinal Cupich, a key U.S. ally of Pope Francis, said that the statement was drafted without input from the conference’s administrative committee, “a collegial consultation that is [the] normal course for statements that represent and enjoy the considered endorsement of the American bishops.”

“The internal institutional failures involved must be addressed, and I look forward to contributing to all efforts to that end, so that, inspired by the Gospel, we can build up the unity of the Church, and together take up the work of healing our nation in this moment of crisis,” Cardinal Cupich concluded.

(In a separate statement, Cardinal Cupich wished President Biden and Vice President Harris well, saying, “The new administration begins in a time of global pandemic, economic peril and deep division, when millions of our brothers and sisters have been brought low by illness, poverty and racism. We pray that the way forward will be inspired, as the Holy Father asked, by dreaming together.”)

Pope Francis sent congratulations to Mr. Biden earlier in the day, a far shorter greeting than the statement from Archbishop Gomez. He did not mention areas in which the White House and the church will likely disagree, including abortion, but instead said he prayed that Mr. Biden’s decisions would be guided by God.

Pope Francis sent congratulations to Mr. Biden earlier in the day. He did not mention areas in which the White House and the church will likely disagree.

“At a time when the grave crises facing our human family call for farsighted and united responses,” the pope wrote, “I pray that your decisions will be guided by a concern for building a society marked by authentic justice and freedom, together with unfailing respect for the rights and dignity of every person, especially the poor, the vulnerable and those who have no voice.”

A senior Vatican official called Archbishop Gomez’s statement “most unfortunate” and feared it could “create even greater divisions within the church in the United States,” America reported Wednesday.

Earlier on Wednesday, Cardinal Joseph Tobin, archbishop of Newark, told Catholic News Service that he did not understand why Catholic abortion opponents use confrontational language with political opponents who share their faith.

“Even people who would be well disposed to the president find it difficult to [understand how] he can conjugate his stance on [the abortion] issue—which is so important to Catholics—and this faith that has been so important to him all of his life,” Cardinal Tobin said. “What I don’t understand are people who use very harsh words and want to cut off all communication with the president because of this.”

A senior Vatican official called Archbishop Gomez’s statement “most unfortunate” and feared it could “create even greater divisions within the church in the United States.”

(Cardinal Tobin also released an official statement offering prayers for the new administration, writing, “We ask God for peace and unity as well as the strength and perseverance necessary to address our nation’s most urgent issues, especially the deadly pandemic. I pray that American Catholics and all people of good will may respect each other and remain engaged in a peaceful and productive dialogue with our president and his administration for the sake of the common good.”)

By Wednesday afternoon, a flurry of statements from some bishops seemed to take sides between the U.S.C.C.B. statement from Archbishop Gomez and the pope’s statement.

“I am pleased that Archbishop Gomez has spoken on behalf of all the bishops of the United States,” wrote Bishop Thomas Paprocki of Springfield, Ill. “I join Archbishop Gomez and my brother bishops in praying that President Biden will be an effective and virtuous leader of our great nation and that he will truly seek healing and unity, which will necessarily include respect for the God-given freedom of people of faith to practice their religion freely.”

Whereas Bishop Robert McElroy, the bishop of San Diego, released a statement saying, “Pope Francis’ beautiful inauguration message to President Biden today points to the pathway that the Catholic community should follow as we seek to transform the political culture of our nation at this moment in our history.

“It is a pathway of reconciliation that places the healing of our society ahead of any specific policy issue, in the recognition that repairing the soul of our country is the pre-requisite for any sustainable effort to advance the common good.”

Others seemed to seek middle ground.

“We pray that President and Vice President enact policies that provide care for the forgotten and vulnerable, heal our nation from this deadly pandemic, welcome the immigrant, provide economic justice and opportunity for all, work to end systemic racism and promote peace across our country and throughout the world,” wrote Cardinal Seán O’Malley, archbishop of Boston. “We will endeavor to dialogue with the Biden Administration to advance our commitment to the protection of human life from conception to natural death.”