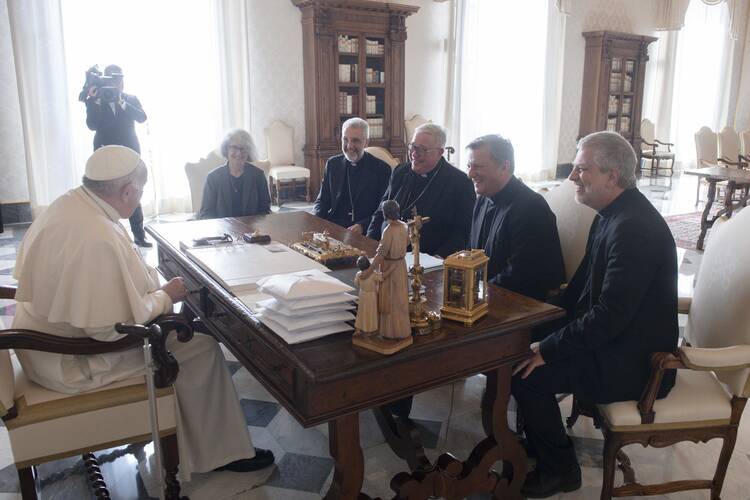 In a surprise announcement this morning, Pope Francis has announced that the final, Roman phase of the ongoing Synod on Synodality will extend over two sessions from October 4-29, 2023, and in October 2024.

“I hope that this decision will favor the comprehension of synodality as a constitutive dimension of the church and help everyone to live it as a journey of brothers and sisters who witness to the joy of the Gospel,” the pope said when he broke the news on Sunday, Oct. 16, after reciting the Angelus with thousands of pilgrims in St. Peter’s Square.

He began by recalling that the first phase of the 16th ordinary assembly of the Synod of Bishops—that is, the current synod—opened on Oct. 18, 2021, and focused on the theme “For a synodal church: communion, participation and mission.” Since then, he said, the first phase has been conducted in the local churches around the world through a process of “listening and discernment.”

Francis said “fruits” of this synod process already “are many” but, he added, “so that they reach full maturity, it is necessary not to be in a rush.”

Last week he received a full report on the first phase of the synod when he met participants that had reviewed the results and prepared a document based on those results. That document will be used to guide the next, continental phase.

The third and final phase was originally scheduled to be held in the Vatican in Oct. 2023 only, while the second continental phase is due to be held during the first three months of 2023. But like the 2014-2015 synod on the family, Francis has decided to celebrate this final phase in two sessions given the importance of the subject under discussion for the future of the Catholic church.

Pope Francis: “I hope that this decision will favor the comprehension of synodality as a constitutive dimension of the church."

Pope Francis concluded today’s announcement with this wish: “I trust that this decision will promote the understanding of synodality as a constitutive dimension of the Church, and help everyone to live it as the journey of brothers and sisters who proclaim the joy of the Gospel.”

After the pope’s announcement, the General Secretariat of the Synod issued a statement that said his decision is in accord with the possibility envisaged in Article 3 of the Apostolic Constitution Episcopalis Communio that Francis promulgated in Sept. 2018, which governs the synod.

It said the pope’s decision “stems from the desire that the theme of a Synodal Church, because of its breadth and importance, might be the subject of prolonged discernment not only by the members of the Synodal Assembly, but by the whole Church.”

It emphasized that “the Synod is not an event but a process in which the whole People of God is called to walk together toward what the Holy Spirit helps it to discern as being the Lord's will for his Church.”

Consequently it said, the third phase of this synodal journey “will also take on a processual dimension, configuring itself as ‘a journey within the journey’ to foster more mature reflection for the greater good of the Church.”

In the coming weeks the statement said the General Secretariat will seek “to better define the celebration of the two sessions” in Oct. 2023 and Oct. 2024 and of “the time in-between.”

The General Secretariat concluded by recalling that “the listening process began in 2021 by the local Churches, that is, by the People of God gathered around their Pastors” and said, “it has challenged the Bishops' Conferences and Synods of the Eastern Catholic Churches.” It reported that 112 out of 114 Episcopal Conferences and all the Eastern Catholic Churches “carried out a discernment regarding what emerged in the particular Churches.”

It said the synodal process “now continues with a Continental Stage that will culminate with the celebration of Continental Synodal Assemblies, between January and March 2023.” It explained that these continental assemblies “will be convened to reread the journey made [in phase one] and to continue the listening and discernment, having as their point of departure the Document for the Continental Stage and proceeding in accord with the socio-cultural specificities of their respective regions. Their aim will be to carry out one more step in this spiritual journey.”

Though the Secretariat’s statement did not say so, the document for the continental assembly is expected to be published soon.