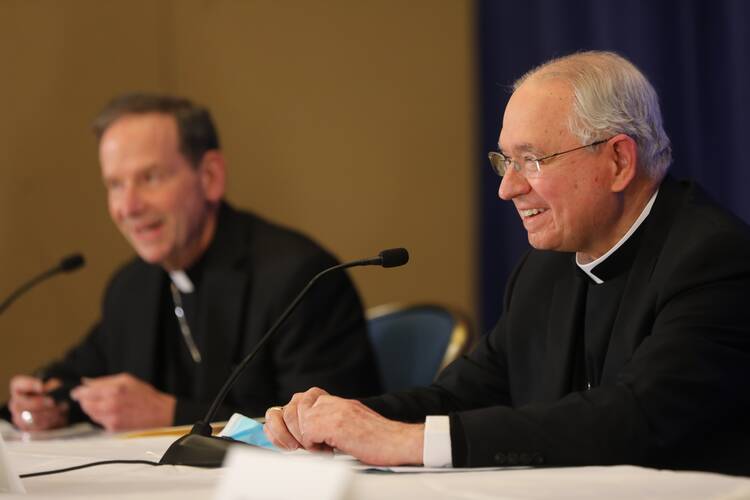 Catholic bishops meeting in Baltimore this week overwhelmingly adopted a statement about the Eucharist on Wednesday, with 222 bishops voting in favor, eight against and three abstaining. Following months of debate and speculation that the document could offer guidance to empower individual bishops to deny Communion to Catholic political leaders who disagree with church teaching on issues like abortion, the document only obliquely references Catholics in public life and instead offers a catechesis of sorts about eucharistic teaching.

In June, the U.S. Conference of Catholic Bishops voted to proceed with drafting a document about “eucharistic coherence,” partly in response to the election of President Joseph Biden, a Catholic who supports legal abortion, and also because of a recent poll that suggests many U.S. Catholics do not understand church teaching on the Eucharist.

Bishops met in executive session all day Monday, and on Tuesday they were allotted time to ask questions to the head of the committee on doctrine, Bishop Kevin C. Rhoades. Just four bishops spoke during this time, and none asked about the issue of public figures and the Eucharist.

The document only obliquely references Catholics in public life and instead offers a catechesis of sorts about eucharistic teaching.

Wednesday morning’s discussion of the document was far more muted than the debate that took place in June, when more than 40 bishops spoke for about two hours about the proposal. Roughly a dozen bishops spoke Wednesday in a conversation that lasted about 30 minutes and focused mostly on precise language in the document.

Perhaps the most significant nod toward the role bishops play in policing who is eligible for Communion came in a modification to the original draft. The amendment, which was accepted by the committee on doctrine before public discussion took place, said that bishops have a “special responsibility” to “guard the integrity of the sacrament.”

Roughly a dozen bishops spoke Wednesday in a conversation that lasted about 30 minutes and focused mostly on precise language in the document.

The “special responsibility” modification, which was one of 86 amendments accepted by the committee before public discussion, is in a section about which kinds of sins, venial or mortal, would make an individual ineligible to receive Communion.

The document includes a reference to a 2006 document adopted by U.S. bishops citing canon law.

Church law stipulates that only an individual’s bishop, not a body of bishops, can place restrictions on one’s ability to receive Communion.

Archbishop Salvatore Cordileone of San Francisco proposed an amendment to the document because, he wrote, it failed to include the unborn on its list of “vulnerable people.” The amendment echoed a debate from 2019, when bishops voted to describe the “threat of abortion” as their “preeminent priority” in a voting guide ahead of the 2020 election.

Archbishop Cordileone, who has recently supported a public prayer campaign targeting Speaker Nancy Pelosi over her support of legalized abortion, wrote in his proposed modification that if the document failed to emphasize abortion, it would “place yet another pastoral obstacle in the path to our efforts to teach and witness convincingly to the dignity of human life in the womb.”

The amendment, which was accepted by the committee on doctrine before public discussion took place, said that bishops have a “special responsibility” to “guard the integrity of the sacrament.”

The committee accepted a modified version of the archbishop’s amendment, stating that Christians are called “to love and protect the most vulnerable in our midst: the unborn, migrants and refugees, victims of racial injustice, the sick and the elderly.”

During the discussion, Bishop Steven Biegler, head of the Diocese of Cheyenne, Wyo., asked that the committee consider inserting language into Archbishop Cordileone’s amendment about the those living in poverty and victims of human trafficking. Bishop Biegler’s proposal was not accepted.

In an interview with America following the vote, Bishop Biegler said he was “uncomfortable” with describing abortion as “preeminent” and sought to include language that would highlight the plight of all kinds of vulnerable people.

The document does address the poor several times but not as part of the list of the “most vulnerable.”

In an interview with America following the vote, Bishop Biegler said he was “uncomfortable” with describing abortion as “preeminent.”

Another bishop, Edward Clark, had proposed an amendment that seemed to nod toward the issue of Catholics receiving Communion who are not in full agreement with church teaching, which would include Catholic political leaders who support legalized abortion.

“What is missing is a more intense expression of how the Eucharist is support for the life and faith of the individual Christian—the very reason why people who are not in full agreement with the teachings of the Church are still attracted to and dependent on the Eucharist—and how to reconcile the personal and communal,” read a proposed amendment from Bishop Clark, an auxiliary bishop in Los Angeles.

Bishop Clark said in an interview with America that he believes bishops need to consider the phenomenon of Catholics who hold a deep devotion to the Eucharist but who nonetheless reject some church teaching. But he did not think this document was the place to address that reality and was glad it largely steered clear of politics.

Still, he wonders if it will achieve what its backers sought.

“They want the document to attract people back to the Eucharist,” he said. “I don’t think it does that. It lacks fire.”

“They want the document to attract people back to the Eucharist,” he said. “I don’t think it does that. It lacks fire.”

Ahead of Wednesday’s vote, the pope’s representative to the United States gave a speech in which he reiterated Francis’ view that Communion should not be reserved for “the privileged few.”

Archbishop Christophe Pierre, the papal nuncio to the United States, said there is a “temptation to treat the Eucharist as something to be offered to the privileged few rather than to seek to walk with those whose theology or discipleship is falling short, assisting them to understand and appreciate the gift of the Eucharist, and helping them to overcome their difficulties.”

In his speech, which focused mostly on the Vatican’s efforts to listen to Catholics around the world as it considers the future of the church, the archbishop urged bishops to reflect on “the reality of the eucharistic mystery, which needs to be discovered and rediscovered through the practical experience of the church, living in communion, particularly in this time of pandemic.”

In recent weeks, some bishops have suggested that the document on eucharistic coherence was not intended to have a political edge.

Ahead of Wednesday’s vote, the pope’s representative to the United States gave a speech in which he reiterated Francis’ view that Communion should not be reserved for “the privileged few.”

Bishop Michael Burbidge of Arlington, Va., who chairs the bishops’ communications committee, said during a press conference on Tuesday that “it was never the intention to target any individual or group of individuals” with the drafting of the document. Archbishop José Gomez, the president of the bishops’ conference, said that the document stemmed from a strategic plan that had been in place for years.

But a number of bishops have said that a document about the Eucharist was necessary because of the views of Catholic political leaders and the election of President Biden, a Catholic who supports legalized abortion.

During the disussion Wednesday, the head of the bishops’s pro-life committee, Archbishop Joseph Naumann of Kansas City in Kansas, said bishops need to focus on dialogue with Catholic political leaders.

“I’m not sure that we've taken it seriously as bishops, our responsibility for the care of the souls of these politicians, to really enter into a dialogue with them,” he said.

Earlier this month, Archbishop Salvatore Cordileone said in an interview for America’s “Gloria Purvis Podcast” that the media has been “politicizing” the document but added, “I have to admit with all honesty that it was the election of President Biden that really spurred this.”

“I’m not sure that we've taken it seriously as bishops, our responsibility for the care of the souls of these politicians, to really enter into a dialogue with them,” Archbishop Joseph Naumann said.

In June, some bishops explicitly mentioned President Biden when expressing why they supported drafting a document on the Eucharist.

“It seems to me this is an unprecedented situation in the country,” Bishop Liam Cary, the head of the Diocese of Baker, Ore., said in June. “We’ve never had a situation like this where the executive is a Catholic president who is opposed to the teaching of the church.”

“I think we can’t really get away from the truth, that the origin of the document began as a reaction to the Biden administration,” Bishop Biegler said. “That has marked this document.”

But he said that the final product is less political.

“Now, it’s been moderated significantly and I think that’s why you saw much greater support for it today,” he said. “There’s been a good conversation, a good openness to amendments that have been made, to the credit of the bishops [on the drafting committee].”

Bishop Robert F. Vasa of Santa Rosa, Calif., wrote that he proposed the change because, “Often people drink coffee even in church/during Mass and then approach for Holy Communion.”

A draft of the proposed document that leaked earlier this month showed that bishops had largely backed off from discussing too deeply the issue of Catholic politicians and Communion. But some bishops appeared to offer amendments aimed at strengthening the proposed language.

Bishop Joseph Strickland, who heads the Diocese of Tyler, Tex., had proposed an amendment that would have expanded a section about the “grave reality of scandal” that accompanies the reception of Communion by some Catholics “amid the current turmoil and confusion.” The committee rejected the proposed modification, stating that the issue of scandal was addressed by another amendment. (That amendment was proposed by Archbishop Allen Vigneron of Detroit, the vice president of the bishops’ conference.)

Other modifications were unrelated to neuralgic social issues.

Bishop Robert F. Vasa of Santa Rosa, Calif., wrote that he proposed the change because, “Often people drink coffee even in church/during Mass and then approach for Holy Communion.”