The U.S. bishops’ president race is wide open. Here’s who’s in the running. 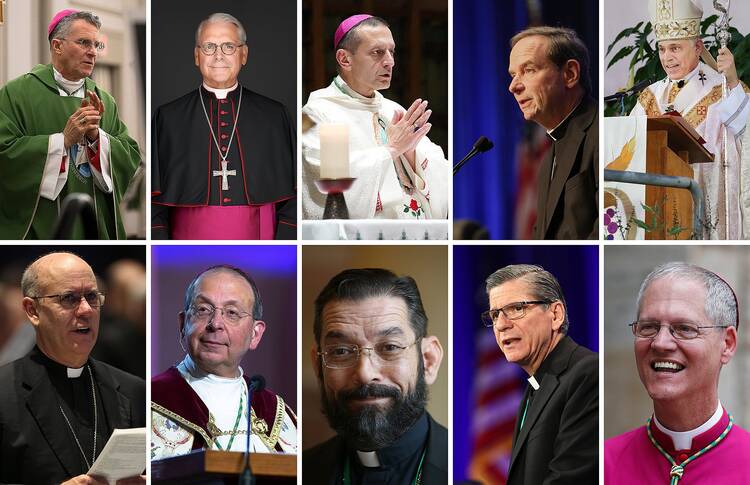 When the U.S. Conference of Catholic Bishops meets this November to elect a new president, it will be the first time in several decades that the race is wide open, with the current vice president unable to run for the top spot because of his age.

The conference released on Tuesday a list of 10 candidates nominated for president and vice president:

When the U.S. Conference of Catholic Bishops meets this November to elect a new president, it will be the first time in several decades that the race is wide open.

A simple majority of votes is required to be elected president and the remaining nine candidates fill out the slate for vice president.

While the selection of a new president includes any number of factors, electing certain leaders may signal the bishops’ priorities for his three-year term.

At least three of the candidates for president are familiar names in the U.S. church’s high-profile campaign for religious liberty, which has dominated the conference’s work in recent years.

While immigration concerns seemed to rise to the top during the Trump administration, bishops have pivoted back to religious liberty issues, which were also a pressing topic during the Obama presidency. Under the Biden administration, bishops have cited religious liberty in expressing opposition to expanded rights for L.G.B.T. Americans and proposals that could protect legal access to contraception and abortion.

While the selection of a new president includes any number of factors, electing certain leaders may signal the bishops’ priorities for his three-year term.

Baltimore’s Archbishop Lori previously served as the head of the U.S.C.C.B.’s religious freedom ad hoc committee and he is chaplain to the Knights of Columbus. Two other candidates, Archbishop Coakley of Oklahoma City and Bishop Flores of Brownsville are currently members of the bishops committee for religious liberty.

Other candidates have been vocal in their criticism of Democratic political leaders, which could set up a clash between the new U.S.C.C.B. president and the White House.

San Francisco’s Archbishop Cordileone, who currently heads the bishops committee on laity, marriage, family life and youth, has repeatedly clashed with Catholic politicians, including Speaker Nancy Pelosi. He announced in May that he had barred Ms. Pelosi from receiving Communion in her home archdiocese of San Francisco.

In 2016, Bishop Rhoades, whose diocese encompasses the University of Notre Dame, expressed disappointment that the school chose to honor then-Vice President Joe Biden because of his support for abortion rights and same-sex marriage.

At least three of the candidates for president are familiar names in the U.S. church’s high-profile campaign for religious liberty, which has dominated the conference’s work in recent years.

Both Archbishop Cordileone and Bishop Rhoades are also standing for election to chair the bishops religious liberty committee.

Last year, both Archbishop Cordielone and Bishop Rhoades spoke in favor of drafting a document that could have been used as the basis for denying Communion to Mr. Biden and Ms. Pelosi.

But at least one candidate for U.S.C.C.B. president spoke out against that measure.

Seattle’s Archbishop Etienne had urged caution on moving ahead with such a statement and ultimately voted against the measure, stating the Eucharist was “now enmeshed in a conversation about politics. And that's a very difficult place for us to be.”

The bishops ultimately voted to adopt a statement on the Eucharist, albeit without explicit language that would advise barring Catholic politicians from receiving Communion.

While perhaps not as well-known outside the confines of church administration, other candidates could bring varied views on contentious issues and deep understanding of how the U.S.C.C.B. operates.

Archbishop García-Siller of San Antonio, for example, has urged lawmakers to enact stricter gun control measures, following mass shootings in El Paso in 2019 and Uvalde in 2022. In 2019, he posted a series of tweets accusing former President Trump of being racist, which he later deleted and apologized for

As far as supporting the priorities set forth by Pope Francis, Bishop Caggiano of Bridgeport has expressed support for the synodal process, a yearslong initiative aimed at capturing the views of the Catholic laity.

At least two other candidates have previously held leadership spots for the conference, including the military’s Archbishop Broglio, who most recently served as U.S.C.C.B. secretary and was also chair of the international justice and peace committee. Bishop Burbidge of Arlington was head of the bishops communications committee.

Bishops will also elect the heads of six standing committees.