What Catholics need to know about Kazakhstan before Pope Francis’ visit 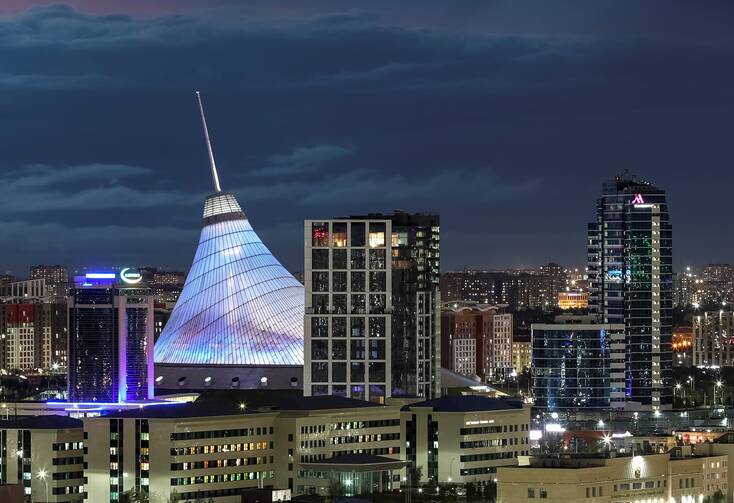 The Khan Shatyr Shopping and Entertainment Center in Nur-Sultan, Kazakhstan, on June 4, 2022. Pope Francis is scheduled to visit Kazakhstan Sept. 13-15 to attend the Congress of World and Traditional Religions. (CNS photo/Pavel Mikheyev)

Beginning tomorrow, Sept. 13, Pope Francis will spend three days in Nur-Sultan, the capital city of Kazakhstan, on the occasion of the Seventh Congress of Leaders of World and Traditional Religions. It will be the 38th international trip for Pope Francis, and the 57th country has visited. It is also the second visit of a pope to Kazakhstan: Pope John Paul II visited the country in September 2001. The trip will also introduce Catholics around the world to a country many know little about.

The pope is expected to deliver an address in Italian at the congress and to engage in private meetings with religious leaders, including Ahmad al-Tayeb, the Grand Imam of Al-Azhar of Egypt. Earlier plans had included a meeting with Patriarch Kirill, the spiritual head of the Russian Orthodox Church, who is no longer attending the meeting. Pope Francis will also celebrate Mass for the country’s Catholics, a small community of around 250,000 that makes up less than 2 percent of the population.

In American popular culture, Kazakhstan is known largely as the home of Sacha Baron Cohen’s longtime fictional alter ego, the television journalist Borat, who most famously was the star of the 2006 satirical movie “Borat: Cultural Learnings of America for Make Benefit Glorious Nation of Kazakhstan.” The film included numerous depictions of Kazakhstan as poor, misogynistic and anti-Semitic, leading Kazakh officials to ban the film in the country. In 2020, however, the Kazakhstan tourism bureau decided to capitalize on Borat’s popularity, releasing an English-language advertisement that repeatedly features Borat’s catchphrase, “Very nice!”

Kazakhstan's neighborhood is a fractious but geopolitically important one: Its borders touch Russia, China, Turkmenistan, Uzbekistan and Kyrgyzstan.

In reality, Kazakhstan plays a significant role in the economy of Central Asia and straddles some of the most significant territory in human history. Horses may have first been domesticated in what is now Kazakhstan; the ancient Silk Road passed through its territory, as does China’s modern attempt to recreate that cultural and economic throughway. The largest country in Central Asia, Kazakhstan is also the largest landlocked country in the world and the ninth-largest by total territory; it covers just over one million square miles and reaches across the traditional divide between Europe and Asia at the Ural River and Ural Mountains. Its neighborhood is a fractious but geopolitically important one: Kazakhstan’s borders touch Russia, China, Turkmenistan, Uzbekistan and Kyrgyzstan.

Most of Kazakhstan is thinly populated, and the entire country includes slightly more than 19 million inhabitants. (By contrast, neighboring Uzbekistan, at one-sixth the size, has over 35 million inhabitants.) Historically much of Kazakhstan’s territory was given over to pastoral use and occupied by nomadic groups; “Kazakh,” like “Cossack,” has its origins in a Turkic word meaning “to wander.” Intensive agricultural cultivation and industrialization only began in earnest (often with unhappy consequences) under Russian and Soviet rule in the 20th century.

The majority of the population is Muslim (70 percent, largely Sunni Muslims), though Kazakhstan has a sizable minority of Christians (26 percent), mostly Eastern Orthodox. Almost all of the country’s 250,000 Catholics are ethnic Poles, Germans and Lithuanians, a consequence of Kazakhstan’s long history with the Russian empire and the Soviet Union.

Most of Kazakhstan’s Catholic community is found among its ethnic German minority.

Today, Kazakhstan is a developing country that has seen relatively consistent economic growth over the past three decades, in large part to its vast reserves of natural resources, including oil and gas. Kazakhstan also is a significant exporter of rare minerals and chemicals; revenue spurred by these and other exports (including agricultural products) has led to a consistently improving standard of living, and Kazakhstan is now classified by the United Nations as a “developed economy.”

Seven decades of control under the Soviet Union (the country declared its independence in 1991, the last of the Soviet socialist republics to do so) left its mark on the country. Huge engineering projects from the 1930s through the 1980s resulted in widespread societal disruption and ecological devastation, including a famine in the 1930s as Soviet leaders attempted to collectivize the national economy. The Soviets also used rural areas in Kazakhstan for hundreds of nuclear tests during the Cold War, with environmental effects lasting to this day.

Further, disastrous agricultural and industrial engineering projects caused the almost complete evaporation of the Aral Sea on the border between Kazakhstan and Uzbekistan. Diversion of water sources for agriculture and the dispersal of pollutants into the Aral Sea have made much of the region inhospitable to human and animal life and caused almost the entire lake bed to turn into a toxic desert.

Russia still launches satellites and other spacecraft from the Baikonur Cosmodrome in southern Kazakhstan, from which the first satellite (Sputnik) and the first manned space mission (with Yuri Gagarin) were also launched, under an agreement with the Kazakhstan government.

Large urban centers in Kazakhstan include the capital of Nur-Sultan, renamed from Astana in honor of the country’s longtime quasi-dictator, Nursultan Nazarbayev, who ruled the country from its independence in 1991 until 2019 (and unofficially for several years after); the former capital of Almady; and Shymkent. A fourth of the working population of Kazakhstan still works in the agricultural sector, and the country has significant disparities in terms of income and wealth. While Kazakhstan officially promotes religious tolerance, some analysts have noted an atmosphere of repression for many small religious groups.

Earlier this year, the country experienced significant political unrest after a spike in fuel prices. A number of protests against the government and former president Nazarbayev became violent confrontations with security forces, leading the current Kazakh president, Kassym-Jomart Tokayev to declare a state of emergency; the ensuing violent suppression of protests was assisted by Russian troops in the Collective Security Treaty Organization, a regional defense association dominated by Russia.

According to Russian President Vladimir Putin at the time, the Russian intervention had been necessary to defend Kazakhstan against ”a terrorist uprising backed by external forces.”

Pope Francis will celebrate a public Mass in Nur-Sultan that is expected to draw up to 3,000 pilgrims from Kazakhstan, Uzbekistan, Kyrgyzstan, Russia and Mongolia.

Most of Kazakhstan’s Catholic community is found among its ethnic German minority. The existence of this community in the country is due to several historically momentous (and some deeply tragic) political decisions by Russian and Soviet leaders. In 1763, Empress Catherine the Great of Russia (herself a German national) invited German immigrants to settle in Russia, in large part to improve the nation’s economic fortunes, and promised land, freedom of religion and freedom of language. Two large waves of German migrants settled in Russia over the next 50 years, many of them along the Black Sea and the Volga River. By the middle of the 19th century, there were half a million ethnic Germans in Russia.

The slow reversal of many of the privileges initially granted to German settlers—as well as persecution during and after World War I—led to sporadic emigration from the Russian empire and the Soviet Union in later decades to Canada, the United States and South America.

During World War II under Joseph Stalin, ethnic Germans were forcibly uprooted from their homes (particularly in areas where advancing German armies might find collaborators) and moved to more remote areas of the Soviet Union; many perished in prison camps or because of starvation. More than 100,000 Germans were deported to Kazakhstan. Members of other ethnic groups exiled to Kazakhstan in Stalin’s purge included Poles, Lithuanians, Greeks and Ukrainians.

After the collapse of the Soviet Union in 1991, Germany offered all ethnic Germans the “right of return,” an offer accepted by more than two million ethnic Germans in the former Soviet Union who moved to a newly reunited Germany, greatly reducing the number of German-identifying people in Siberia and Kazakhstan.

As a result, the Catholic population of Kazakhstan has shrunk considerably but become more diverse. “In general, the number of Catholics has decreased in the past 20 years since the last visit of the pope,” Archbishop Tomasz Peta of Astana, Kazakhstan’s only archdiocese, told the Astana Times, a local English-language journalistic cooperative, on Aug. 31. “But the Catholic church has become more international.”

On April 14, 1991, Pope John Paul II established the Apostolic Administration of Kazakhstan and Central Asia, which later became the Archdiocese of Astana. The seat of the archdiocese is the Cathedral of the Mother of God of Perpetual Help. Archbishop Peta, who was born in Poland, noted that “twenty years ago many had the idea that Catholics in Kazakhstan were mostly Germans, Poles, Belarusians, Ukrainians, and Lithuanians—nationalities that traditionally belong to the Catholic church. Today in Kazakhstan there are dozens of different nationalities in the Catholic church.”

Pope Francis also intends for his visit to Kazakhstan to be a pastoral one.

In addition to his participation in the Seventh Congress of Leaders of World and Traditional Religions, Pope Francis will celebrate a public Mass in Nur-Sultan on Sept. 14 that is expected to draw up to 3,000 pilgrims from Kazakhstan, Uzbekistan, Kyrgyzstan, Russia and Mongolia.

Pope Francis originally had political aims for the visit. His now-canceled meeting with Patriarch Kirill of Moscow, who has justified Russia’s invasion of Ukraine on religious and moral grounds, would have been their first face-to-face meeting since the invasion and a high-profile diplomatic mission. Pope Francis has been vocal in his criticism of the invasion and Patriarch Kirill’s support for it, telling the Italian newspaper Italian newspaper Corriere della Sera in May that “the patriarch cannot turn himself into Putin’s altar boy.”

Pope Francis had also expressed hope for a visit to Ukraine itself as part of the trip, though the logistics of such a trip and Francis’ limited mobility have made that highly unlikely.

Chinese President Xi Jinping will also be in Kazakhstan during the pope’s visit, though no meeting between the two has been planned.

Pope Francis also intends for the visit to be a pastoral one, according to Anthony Corcoran, S.J., the apostolic administrator of the Catholic church in neighboring Kyrgyzstan, who has also served since 2008 as canonical superior of the Russian Region of the Society of Jesus. “In our ad limina meeting with Pope Francis in 2019, he referred to our little churches in Central Asia as ‘germoglio’ [a new growth on a plant],” Father Corcoran told America via email.

“He encouraged us to reflect on how God loves to work through small things. This has been an inspiring and insightful image for me in our work here in these tiny Christian communities.”