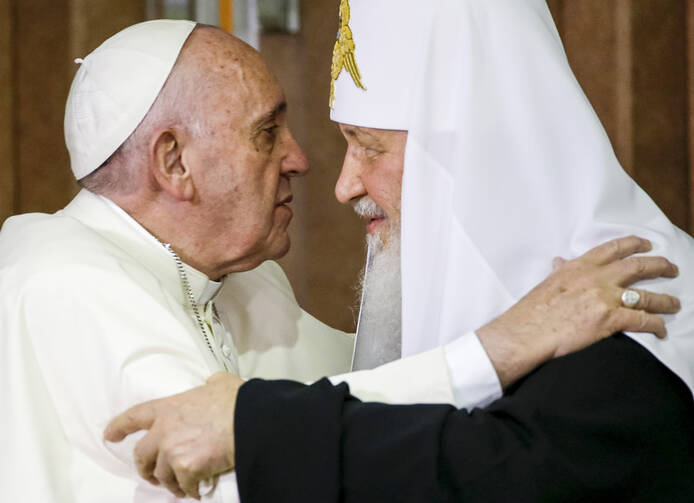 ROME (AP) — Pope Francis will travel next month to Kazakhstan, where he could meet with Patriarch Kirill, the leader of the Russian Orthodox Church, who has justified Moscow’s war in Ukraine.

Francis, 85, will attend an interfaith conference in the Kazakh capital, Nur-Sultan, from Sept. 13-15, the Vatican said Monday.

Francis called off a planned encounter with Kirill in June in Jerusalem because of the diplomatic fallout it would have created. Kirill has justified the invasion of Ukraine on spiritual and ideological grounds, calling it a “metaphysical” battle with the West. He has blessed Russian soldiers going into battle and invoked the idea that Russians and Ukrainians are one people.

Kirill has justified the invasion of Ukraine on spiritual and ideological grounds, calling it a “metaphysical” battle with the West.

Francis and Kirill, who had a first historic encounter in Havana in 2016, have spoken by video call at least once since the war began.

The Kazakh government is hosting a “Congress of Leaders of World and Traditional Religions” from Sept. 14-15. Kirill has been invited and the Moscow Patriarchate has said he would attend.

Returning from his just-concluded trip to Canada, Francis told journalists on Saturday that in addition to Kazakhstan, he also hoped to visit Ukraine but that nothing had yet been confirmed. Vatican officials say they hoped to organize a trip even in the coming weeks.

On Sunday, Francis again prayed for Ukraine, saying he had never stopped praying for “the attacked, martyred Ukrainian people,” during his Canadian pilgrimage.

“If you look at reality objectively, considering the damage that war brings every day to those people but also the entire world, the only reasonable thing to do is to stop and negotiate,” he said. “May wisdom inspire concrete steps of peace.”

Francis has criticized Kirill’s support for the war, telling an Italian newspaper in May that the patriarch shouldn’t become “Putin’s altar boy.”

Francis has criticized Russia’s invasion of Ukraine and Kirill’s support for the war, telling an Italian newspaper in May that the patriarch shouldn’t become “Putin’s altar boy.”

The Russian Patriarchate shot back that it was regrettable” that Francis “chose the wrong tone” to relay the contents of their March video call.

Francis, whose mobility has been limited because of strained knee ligaments, said he thought the Kazakhstan trip would be fairly “tranquil, without too much moving around” since it was purely to attend a religious congress.

A trip to Ukraine would be far more complicated and would presumably require he take the train in from Poland.

“I’ve said I want to go to Ukraine. Let’s see what I find when I get home,” he said.