Will Pope Francis visit Ukraine? A September trip is possible. 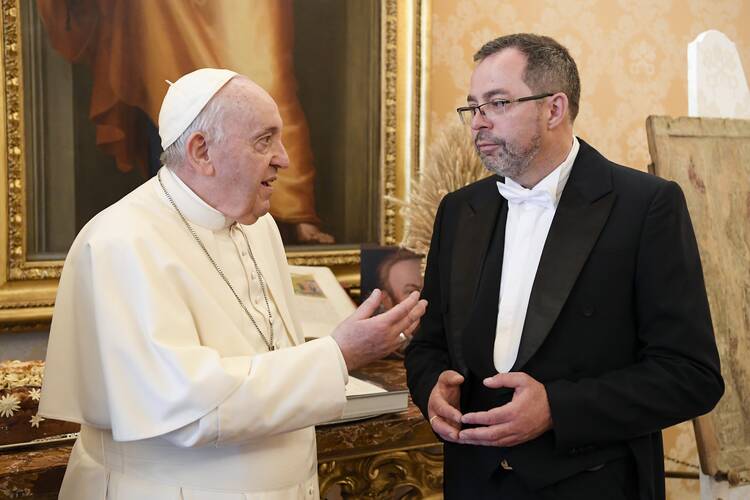 Pope Francis speaks with An

When Pope Francis met Ukraine’s ambassador to the Holy See, Andrij Yurash, in a private audience in the Vatican’s Apostolic Palace this morning, Aug. 6, they discussed the pope’s wish to visit the war-torn country. Francis could go to Ukraine before his visit to Kazakhstan, which is scheduled for Sept. 13-15, the ambassador made known after the audience. The Vatican, however, has not yet confirmed this news.

Ambassador Yurash first signaled this news in a tweet. He wrote that the pope told him during the audience that “I am very close to Ukraine and want to express my closeness through my visit.” The ambassador added, “for many years, and especially since the start of the war, Ukraine has been waiting for the Pope, and will be happy to greet him before his trip to Kazakhstan.”

Francis could go to Ukraine before his visit to Kazakhstan, which is scheduled for Sept. 13-15.

Francis has spoken out against the war in Ukraine more than 70 times since, and has expressed his closeness to the martyred people of that land. The country has been under siege from Russian forces ever since Russian President Vladimir Putin ordered an invasion of Ukraine on Feb. 24. Francis has called for a ceasefire and appealed for negotiations to end the war, offering to have the Holy See act as mediator. While Ukraine was ready to accept this, Russia has shown no openness to his offer; nor have they shown any willingness to invite him to Moscow, though he is ready to go there.

In his recent visit to Canada and in several interviews, Pope Francis made his desire to visit Ukraine clear. Informed sources told America that the Ukrainian leadership would have liked him to visit Kyiv on Aug. 24, the anniversary of their independence from the Soviet Union in 1991, but that was politically problematic if he wished to keep the door open for mediation with Russia.

Francis’ visit to Canada served as a test case as to whether he would be able to make other foreign travel, given his mobility problems due to a fracture in his right knee. He passed that test well, even though he had to use a wheelchair, a walking stick or a walker at different moments during the trip. By the time he returned to Rome on July 30, it was clear that he can travel as long as future trips account for his physical limitations.

Francis’ visit to Canada served as a test case as to whether he would be able to make other foreign travel, given his mobility problems due to a fracture in his right knee.

America has learned from informed sources that Francis was told his physical condition is good after an Aug. 5 visit to the Vatican medical center for a checkup. At the same time, his doctor recommended that he take a period of rest after the stressful trip to Canada before immediately embarking on further travel. For this reason, the 85-year-old pontiff was advised not to make the trip to Ukraine in August. The trip would also have involved considerable logistical problems because of the need to travel both by plane and train to visit the capital city of this country at war, like many foreign leaders have done.

He could still visit Ukraine after the Rome consistory to make new cardinals (Aug. 27) and the meeting of all the cardinals worldwide (Aug. 29-30). As the Ukrainian ambassador hinted, the visit could also take place in early September, before he travels to Kazakhstan on Sept. 13, where he is expected to participate in the 7th Congress of Leaders of World and Traditional Religions.

Such a trip would require considerable preparation in less than a month, so it is not surprising that the Vatican has not yet confirmed it. Furthermore, the ongoing war makes this visit unlike other papal trips. Sources say it is highly unlikely that he will be accompanied by a large entourage or the Vatican press corps, as happens on normal trips.