Borat’s humor is funny and ethical. Not. 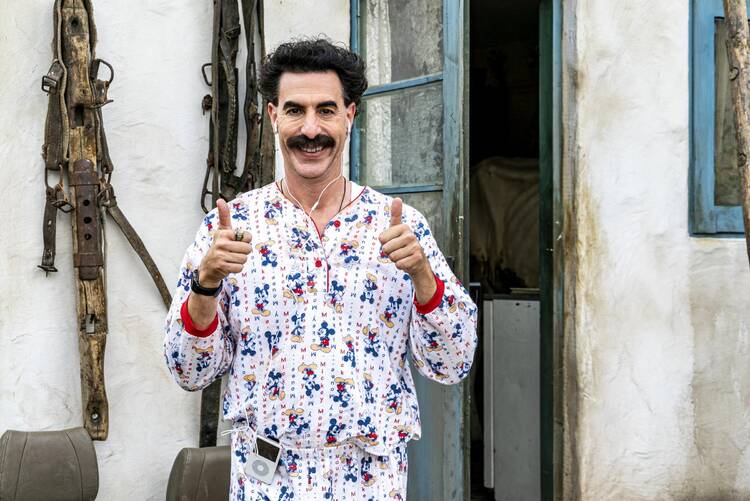 You would be excused this past week, after seeing “Rudy Giuliani and Borat” trending on Twitter, for thinking that it was 2004 all over again. Sadly, no, it’s still 2020, but Borat (Sacha Baron Cohen) and Rudy are still with us, or rather they have been resurrected in the public consciousness, thanks to approximately a minute and a half of footage from the just-released “Borat Subsequent Moviefilm” on Amazon Prime.

Said footage interweaves fiction and nonfiction as President Trump’s attorney and ally, the very real Rudy Giuliani, is recorded in a hotel bedroom with the fictional Borat’s cinematic daughter Tutar (Maria Bakalova), disguised as a reporter. As Giuliani sits on the side of the bed and asks Tutar for her address and phone number, she removes his microphone from his shirt. This is then followed by a shot of Giuliani lying back on the bed and placing his hand in his pants, at which point Borat storms into the room.

Giuliani has denied any wrongdoing, contending that he was tucking his shirt back into his pants after it had been untucked. While Baron Cohen responded by saying that the scene “is what it is. He did what he did.” Whatever he did, social media took notice.

Borat, the character, has existed in some form or another since the late 1990s, but gained traction on “Da Ali G Show,” which appeared both on the U.K.’s Channel 4 and HBO between 2000 and 2004. Borat appeared along with the show’s eponymous character and another Cohen creation, Bruno, a gay Austrian fashion journalist, in interviewing various people from different fields in quick 10-minute segments. Each of the three characters has been the subject of their own feature film, with only the original film featuring Borat a critical and commercial success.

Having to sit with Cohen’s brand of humor—sometimes referred to as “cringe comedy”—for the entirety of a feature-length film can be tough.

The satire of “Da Ali G Show” shone brightest when one of the three characters interviewed an unsuspecting authority figure from the world of politics, business or academia. What made the show’s humor so pointed and crisp was due in no small part to the brevity of each segment. The audience was able to absorb the spectacle and laugh at the undermining of the authority figure at hand without having to marinade too long in the uncomfortability of the situation.

I can’t help but question what this form of comedy does to its audience—or better yet, what it does for its audience.

The infamous Giuliani scene happens in the last third of the film, by which point the audience has already sat through scene after scene of people—for the most part anonymous, not public figures—being exposed or humiliated in some way by the titular hero or his daughter. Cohen is clearly aiming his satirical arrow at Trump and Trump’s America, and we are witness to myriad images of people from varying socioeconomic contexts (though seemingly all from the South) being exposed, sometimes as racist, sometimes as misogynist, but sometimes just as…well…uneducated.

And whatever can be said about the dubious morals and outlooks of the various subjects, after sitting through multiple scenes of ordinary people being “exposed,” you cannot help but question the ethics of the production process itself. Indeed, the reporter Rebecca Rubin gives a detailed account in Variety of the dubious means by which Cohen and his staff were able to get people to agree to be filmed.

Cohen’s humor is relentless and unforgiving; it always has been.

And maybe it’s okay that they were lied to. After all, many of them do seem to be racist or misogynist, so perhaps they deserve to be humiliated in front of a global audience. Perhaps the ends do justify the means? Maybe this is comedy’s answer to “cancel culture,” where there are no second chances, no redemption nor forgiveness.

Cohen’s humor is relentless and unforgiving; it always has been. And though the form of his comedy hasn’t changed much in the past 20 years, somehow it all seems to fall a little heavier right now.

Sacha Baron Cohen searches for America. Don’t be shocked by what he finds.
Bill McGarvey

In some ways merciless comedy seems quite appropriate in the given moment; all things considered, it seems very in tune with the zeitgeist.  But I can’t help but question what this form of comedy does to its audience—or better yet, what it does for its audience. Schadenfreude is as good an answer as anything. And I use the term “comedy” very loosely because I didn’t laugh once at the collection of scenes of morally questionable characters, engaged to appear with Borat under false pretences, having their various character deficiencies exposed on film.

Nor did I laugh when a young Bulgarian actress, appearing in the biggest role of her career, was asked by Cohen and other men to make advances toward the former mayor of New York City before leading him into a hotel bedroom and taking off his microphone. I cringed and I cringed some more. I didn’t laugh. But perhaps that’s just as well for what passes as comedy in the year 2020.

Jake Martin, S.J., is a Jesuit priest and a Ph.D. candidate in film studies at Trinity College, Dublin. He is the current Wade Scholar in residence at Marquette University in Milwaukee, Wis.