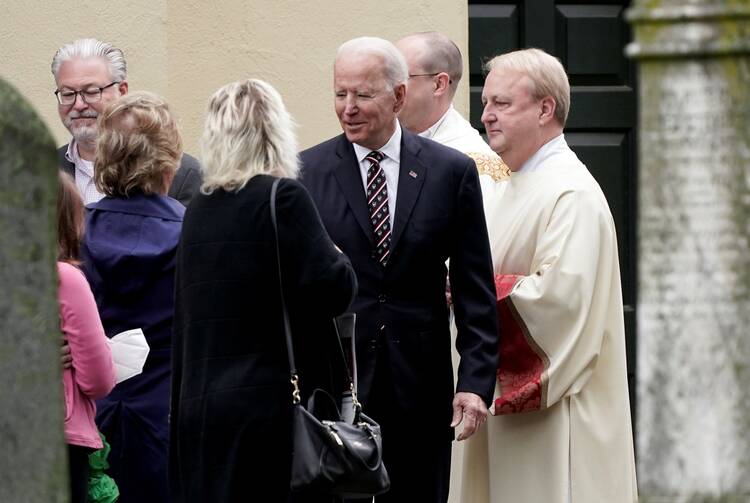 President Joe Biden speaks with people outside St. Joseph on the Brandywine Catholic Church in Wilmington, Del., on May 30, 2021. (CNS photo/Ken Cedeno, Reuters)

Editor’s note: This article is part of The Conversation with America Media, offering diverse perspectives on important and contested issues in the life of the church. Read other views on the reception of the Eucharist here.

The recent 168-55 vote by the U.S. bishops to draft a document to examine the “meaning of the Eucharist in the life of the church” and the reception of Communion puts them on a collision course with the second Catholic president of the United States, Joseph Biden Jr. Despite efforts by the U.S. Conference of Catholic Bishops to redefine the purpose of the document, the narrative has already been set, with its expected passage in November widely seen as a green light to deny Communion to President Biden for his policies supporting access to abortion.

Bishops on both sides of the argument are acting in what they see as in the best interest of the church. Those in support of the document want to prevent any “confusion” among their flock from allowing a Catholic president to “promote” abortion without pastoral sanction. Bishops in opposition have argued that politicizing the Eucharist would only bring division among Catholics—the opposite of unity, which is a sign of Communion.

Unfortunately, the question before the bishops is currently framed as a yes-or-no proposition. Is there a path for the bishops to challenge Mr. Biden without involving the sacrament that the Catechism of the Catholic Church calls the “source and summit of the Christian life”?

Yes. There are various options available to the U.S. bishops that would chasten President Biden without involving the central sacrament of the church.

Educate Catholics, not politicians, on the meaning of the Eucharist. The credibility of the church, in the end, does not depend upon denying the president Communion but upon how Catholics understand and receive the sacrament.

According to a Pew Center survey in 2019, almost 70 percent of Catholics believe that the bread and wine at Mass “are symbols of the body and blood of Jesus Christ” rather than the real presence of Christ. But belief in the real presence is central to the sacrament and how a Catholic prepares him or herself for the reception of Communion. A teaching document that summarizes this belief and its origins, as well as how it can lead a person to holiness, is needed—particularly for young people.

As such, the bishops would be wise to switch course and issue a teaching document on the Eucharist targeted toward Catholics in the pews without including language targeting Catholics in the political world. Such language would receive all the attention, while the central teaching of the document would be lost. A local bishop has the authority to deny Communion to a public official in any case; a national document will not change how they act individually in this regard.

Work with Mr. Biden and try to persuade him. Instead of alienating him, the U.S. bishops should work with President Biden and collaborate on the issues upon which they agree—climate change, anti-poverty measures and immigration, for example—and attempt to influence him on issues upon which they disagree, particularly abortion. Of course, the U.S. Conference of Catholic Bishops regularly engages the Biden administration on a variety of issues, but the Communion controversy has now placed a cloud over the discussions.

By engaging the president, perhaps the bishops can begin a dialogue with him on how to reduce abortions—a conversation that has rarely, if ever, seriously occurred in the abortion wars. Poverty reduction, the promotion and streamlining of adoption, child care support and access to prenatal care are some examples of policies that could possibly reduce the number of abortions in the United States. The bishops also could attempt to persuade the president to protect conscience and religious liberty rights, which continue to be threatened.

By engaging the president, perhaps the bishops can begin a dialogue with him on how to reduce abortions—a conversation that has rarely, if ever, seriously occurred in the abortion wars.

Finding common ground with President Biden would not signal a surrender on abortion by the bishops but show that it is more effective to talk with him directly than to shout at him from afar.

Oppose him and, if possible, defeat him on the issue. Of course, the U.S. bishops can and will oppose Mr. Biden’s abortion policies, both in Congress and in the courts. Defeating him in the public policy arena would be more beneficial to the pro-life cause than denying him Communion, which could only deepen the divisions within the church.

For example, President Biden has removed from his administration’s proposed federal budget what is known as the Hyde Amendment, or language that restricts public funding of abortion. (In late July, the U.S. House passed a package of spending bills without the Hyde Amendment, but as of this writing the Senate has not followed suit.) By mobilizing Catholics and others to contact their senators and representatives, the U.S. bishops may be able to convince Congress to restore this language in the budget.

Pray for him. The U.S. bishops can also deploy prayer as a way to engage the president on abortion. This can be done very publicly, with the involvement of Catholics and others, and in a pastoral manner upon which all Catholics can agree.

The U.S. bishops should find ways to collaborate with Joe Biden (and not alienate him)
J. Kevin Appleby

This is counter to the direct confrontation at the altar rail preferred by culture warriors but is more in line with the pastoral mission and style of the church. For two millennia, church leaders have rightly invoked the power of prayer in times of crisis. They should do so again, this time not only for the president but also for the sake of unity in the church.

While the U.S. bishops have strongly endorsed the drafting of a guidelines document on the reception of Communion, they can still change the direction and focus of this document—and the national narrative on it—at their next meeting in November. Hopefully, they can take advantage of this teaching moment and use it to bring Catholics closer to the Eucharist, the “source and summit” of the life of the church, rather than unintentionally driving them away.

J. Kevin Appleby is a practicing Catholic in the Diocese of Arlington, Va., and former director of migration policy for the U.S. Conference of Catholic Bishops.