Pope Francis: You cannot negotiate with the Gospel 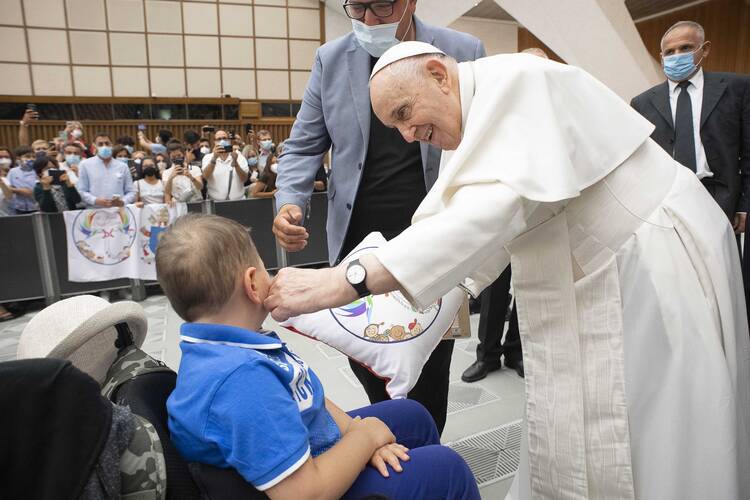 Pope Francis with a young person during his general audience in Paul VI hall at the Vatican Aug. 4, 2021. It was his first audience since undergoing colon surgery July 4. (CNS photo/Vatican Media)

Below is the text of Pope Francis’ weekly Wednesday audience, delivered on Aug. 4, 2021.

When it comes to the Gospel and the mission to evangelize, Paul is enthusiastic, he comes out of himself. He seems to see nothing other than this mission that the Lord has entrusted to him. Everything in him is dedicated to this proclamation, and he has no interest other than the Gospel. It is Paul’s love, Paul’s interest, Paul’s profession: to proclaim. He even goes so far as to say: "Christ did not send me to baptize, but to preach the Gospel" (1 Cor 1:17). Paul interprets his whole existence as a call to evangelize, to make Christ’s message known, to make the Gospel known: “Woe to me”, he says, "if I do not preach the Gospel" (1 Cor 9:16). And writing to the Christians of Rome, he presents himself simply as follows: "Paul, a servant of Christ Jesus, an apostle by calling, chosen to proclaim the Gospel of God" (Rom 1:1). This is his vocation. In short, he is aware that he has been "set apart" to bring the Gospel to all, and he cannot but devote himself with all his strength to this mission.

Pope Francis: Those who insist on ‘keeping the truth’ over preaching the Gospel have always threatened the church
Pope Francis

Explainer: Pope Francis doesn’t spend summer vacation at the papal summer castle. So what does he do to relax?
Colleen Dulle

One can therefore understand the sadness, the disappointment and even the bitter irony of the Apostle towards the Galatians, who in his eyes are taking the wrong path, which will lead to them to a point of no return: they have taken the wrong path. The pivot around which everything revolves is the Gospel. Paul does not think of the “four Gospels”, as is natural for us. Indeed, while he is sending this Letter, none of the four Gospels had yet been written. For him the Gospel is what he preaches, what is called the kerygma, that is, the proclamation. And what proclamation? That of the death and resurrection of Jesus as the source of salvation. A Gospel that is expressed in four verbs: “Christ died for our sins in accordance with the scriptures, he was buried, that he was raised on the third day in accordance with the scriptures, and he appeared the Cephas, then to the twelve” (I Cor 15: 3-5). This is Paul’s proclamation, the proclamation that gives life to all. This Gospel is the fulfillment of the promises and the salvation offered to all men. Whoever accepts it is reconciled to God, is welcomed as a true son, and receives the inheritance of eternal life.

The Gospel is expressed in four verbs: “Christ died for our sins, he was buried, he was raised on the third day, and he appeared the Cephas, then to the twelve.”

Faced with such a great gift to the Galatians, the Apostle cannot explain why they might think of accepting another “gospel”, perhaps more sophisticated, more intellectual, I don’t know … but another “gospel”. It should be noted, however, that these Christians have not yet abandoned the Gospel announced by Paul. The Apostle knows that they are still in time not to take a false step, but he warns them strongly, very strongly. His first argument points directly to the fact that the preaching carried out by the new missionaries—those who bring novelty, who preach—cannot be the Gospel. On the contrary, it is a proclamation that distorts the true Gospel because it prevents them from attaining the freedom acquired by arriving at faith—this is the key word, isn’t it?—it prevents them from reaching the freedom acquired by coming to faith. The Galatians are still "beginners" and their disorientation is understandable. They do not yet know the complexities of the Mosaic Law, and their enthusiasm in embracing faith in Christ leads them to listen to these new preachers, deluding themselves that their message is complementary to Paul’s. And it is not.

However, the Apostle cannot risk compromises on such decisive ground. The Gospel is only one and that is what he proclaimed; there can be no other. Beware! Paul does not say that the true Gospel is his because it was he who announced it, no! He does not say this. This would be presumptuous, it would be boastful. Rather, he affirms that "his" Gospel, the same one that the other Apostles were proclaiming elsewhere, is the only authentic one, because it is that of Jesus Christ. He thus writes: “I would have you know, brethren, that the gospel which was preached by me is not man’s gospel, but it came through a revelation of Jesus Christ” (Gal 1:11). We can understand why Paul uses very harsh terms. Twice he uses the expression “anathema”, which indicates the need to keep far from the community that which threatens its foundations. And this new “gospel” threatens the foundations of the community. In short, on this point the Apostle leaves no room for negotiation: one cannot negotiate. With the truth of the Gospel, one cannot negotiate. Either you receive the Gospel as it is, as it was announced, or you receive any other thing. But you cannot negotiate with the Gospel. One cannot compromise. Faith in Jesus is not a bargaining chip: it is salvation, it is encounter, it is redemption. It cannot be sold off cheaply.

This situation described at the beginning of the Letter seems paradoxical, because all those involved seem to be animated by good feelings. The Galatians who listen to the new missionaries think that by circumcision they will be even more devoted to the will of God and thus be even more pleasing to Paul. Paul's enemies seem to be inspired by fidelity to the tradition received from the fathers and believe that genuine faith consists in observing the Law. In the face of this supreme fidelity, they even justify their insinuations and suspicions about Paul, who is considered unorthodox with regard to tradition. The Apostle himself is well aware that his mission is of a divine nature—it was revealed by Christ Himself, to him—and therefore he is moved by total enthusiasm for the novelty of the Gospel, which is a radical novelty, not a fleeting novelty: there are no “fashionable” gospels, the Gospel is always new, it is newness. His pastoral anxiety leads him to be severe, because he sees the great risk facing young Christians. In short, in this labyrinth of good intentions it is necessary to disentangle oneself in order to grasp the supreme truth that is most consistent with the Person and preaching of Jesus and His revelation of the Father's love. This is important: knowing how to discern. Very often we have seen throughout history, and we even see this today, some movements that preach the Gospel in their own way, sometimes with real and genuine charisms; but then they take it too far and reduce all the Gospel to a “movement”. And this is not Christ’s Gospel: this is the Gospel of the founder and yes, it may help at the beginning, but in the end it does not bear fruit with deep roots. For this reason, Paul's clear and decisive word was salutary for the Galatians and is salutary for us too. The Gospel is Christ’s gift to us, He Himself revealed it to us. It is what gives us life.