Most Catholics have no idea who former Cardinal McCarrick is. That’s a problem. 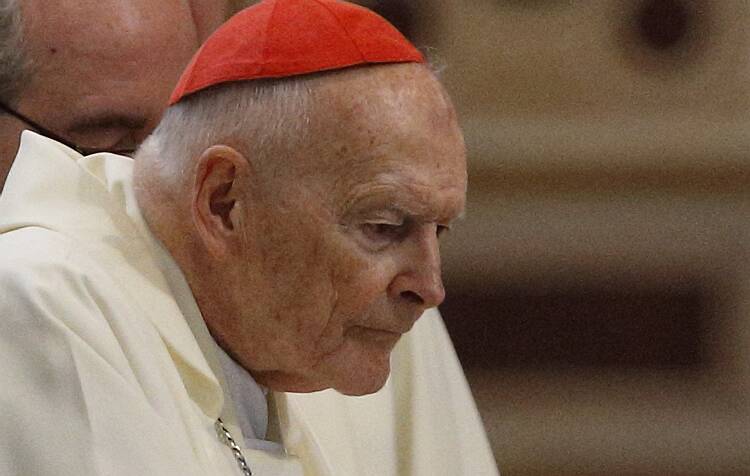 (RNS) — When the news broke on Thursday (July 29) that the former cardinal Theodore McCarrick had been criminally charged with sexual abuse of a minor, many Catholics likely felt justice was one step closer to being served. Others may have wondered anew how the former archbishop of Washington had been allowed to abuse seminarians and minors for decades.

But a new survey shows that perhaps the likeliest response to the McCarrick news among Catholics was: Who?

McCarrick, who was laicized in 2019, is the highest ranking individual in the Catholic Church to be charged in the abuse crisis. His alleged abuse spanned decades and has received national attention since it became public in the summer of 2018. But a recent survey commissioned by America Media and conducted by the Center for Applied Research in the Apostolate found that only 38% of Catholics surveyed had heard of McCarrick.

Editorial: How you see the sexual abuse crisis
The Editors

Even when respondents were told about the accusations of abuse against him, only 44% recognized the name. Those who had heard of McCarrick’s story were evenly split between those who felt the news represented a positive change in the church and those who felt it represented a negative one.

The ability to name-check the hierarchy is not inherently a sign of engagement with the church. But the fact that the highest-profile case of abuse in recent memory is unfamiliar to over half of the Catholics surveyed reveals a major communication problem within the church, particularly around the abuse crisis.

A new survey shows that perhaps the likeliest response to the McCarrick news among Catholics was: Who?

Our data show that Catholics want the institutional church to respond to the crisis, but it has not always done its part to communicate what reforms have already begun or to open up new channels for dialogue. The disconnect is one that adds to the pain caused by the abuse and the cover-up by leaving many Catholics feeling stuck in a perpetual crisis and unaware of any progress or available resources.

Although 57% of Catholics surveyed say they pay “a great deal” or “quite a bit” of attention to the topic of sexual abuse in the church, the survey also shows Catholics remain awash in misinformation and uncertainty about the causes of the abuse crisis and the prevalence of abuse today.

Twenty-three percent of respondents said they did not know why the abuse crisis happened, and 66% of those surveyed overestimated the percentage of priests accused of abuse. In 2007, 52% of Catholics surveyed by CARA knew the percentage of priests credibly accused of abuse was less than 5%. But in the more recent survey, only 34% knew this. In addition, approximately two-thirds of respondents did not realize the majority of the abuse cases occurred prior to 1985.

The fact that the highest-profile case of abuse in recent memory is unfamiliar to over half of the Catholics surveyed reveals a major communication problem within the church, particularly around the abuse crisis.

That there are fewer cases of abuse today does not mean the crisis is in the past. New cases continue to come to light and the church continues to grapple with the crisis of trust and leadership that has been revealed. But in order for Catholics to gauge what progress has been made with regard to protecting children and vulnerable people, and what still needs to change, people in the pews must first have a clear understanding of the current reality.

This means striving for greater transparency from dioceses and religious orders in terms of the handling of cases and the naming of the credibly accused. It means journalists covering the church should continue to cover the horrors of abuse and the stories of survivors but also acknowledge these are part of a larger narrative that includes ongoing reform. It means the people in the pews must understand their own responsibility to remain vigilant and stay informed.

The survey shows many Catholics feel that the anti-abuse efforts already in place seem to be working. About half of people who attended Mass monthly or more had attended a safe-environment training. Additionally, 84% of respondents said that such training “sufficiently prepared (them) to help prevent or identify sexual abuse” and 90% said the training “helped to make (their) school/parish/ministry a safer place for children.”

But while the church’s response to the crisis must be practical, it must also be pastoral. And on this front, few have found the support they need. A minority of Catholics (33%) said their parish community had helped them to process the abuse crisis. Among those whose parish had been helpful, some of the responses that were named as most effective were the chance for discussion of the crisis outside of Mass (32%), acknowledging the crisis publicly and with openness (18%), and talking about abuse in support groups or therapy (15%).

36% of Catholic parents surveyed said the abuse crisis made them question whether they should continue to raise their children in the church.

Despite a desire for public acknowledgment of the crisis, only 29% of those surveyed said they’d heard the abuse crisis discussed in the homily at Mass, and only 26% said their parish had formed a listening group in response to the crisis.

The discrepancy between the stated need and the availability of such resources, and between the desire for transparency but the difficulty in modeling it, highlights a significant challenge facing the church as it attempts to move forward. A compassionate, parish-based response could be key to finding a balance between informing the people in the pews about the crisis while also giving them a place to process the news they do hear as it breaks.

The future of the Catholic Church could depend, at least in part, on the church effectively responding to this issue: 36% of Catholic parents surveyed said the abuse crisis made them question whether they should continue to raise their children in the church.

If the institutional church hopes to be effective in its mission, it must keep the protection of its children at the forefront of its actions and policies. But it also depends on how well it empowers all Catholics — lay and religious — to hold the hierarchy accountable, to recognize the ongoing reality of the crisis, and to help one another process the trauma in order to move forward together.