U.S. Bishops overwhelmingly vote to draft a document on the Eucharist after lengthy debate about politicization 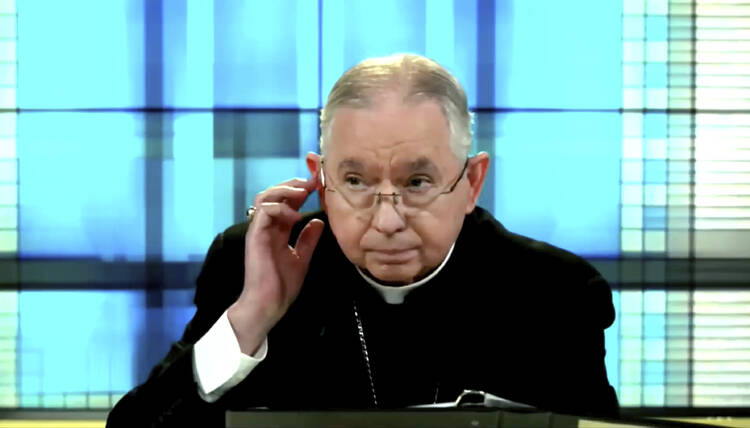 The U.S. bishops approved by a wide margin a plan to draft a document to examine the "meaning of the Eucharist in the life of the church" following a lengthy debate during their spring general assembly.

The action to move forward passed with 168 votes in favor and 55 votes against it. There were six abstentions.

The results, announced June 18, the final day of the virtual spring assembly, allows the bishops' Committee on Doctrine to draft the document and present it for discussion when the bishops reconvene in person in November.

For more than two hours June 17, 43 bishops shared their views on whether such a document was necessary at a time when Catholics are returning to regular Mass attendance as pandemic restrictions ease or if it should even be considered lest it be perceived as fracturing the unity of a church already faced with numerous challenges.

Some supporters of the measure said a strong rebuke of President Joe Biden was needed because of his recent actions protecting and expanding abortion access, while opponents warned that such action would portray the bishops as a partisan force during a time of bitter political divisions across the country.

The action to move forward passed with 168 votes in favor and 55 votes against it. There were six abstentions.

The bishops reached no consensus during the discussion. They voted electronically immediately after the second day of the meeting concluded late in the afternoon.

As expected, viewpoints varied among the bishops.

Most bishops welcomed the idea of strengthening teaching about the Eucharist, especially given that the bishops have embarked on a multiyear National Eucharistic Revival initiative that is part of the U. S. Conference of Catholic Bishops' 2021-2024 strategic plan, "Created Anew by the Body and Blood of Christ: Source of Our Healing and Hope."

As proposed, each part includes three topics that would be addressed including, respectively, the real presence of the body and blood of Christ in Communion; unity, beauty and identity as the "fount and apex of the whole Christian life"; and moral transformation, eucharistic consistency and missionary discipleship.

He said the document was never intended to present national norms for the reception of the Eucharist, but to serve as a teaching tool for Catholics about the reception of holy Communion as a grace-filled gift.

He said the document was developed in light of the decline in the belief among Catholics in the Real Presence in the Eucharist as well as the long absences from regular Mass attendance, which may have led people to place less significance of the Eucharist in their lives.

He said the committee wanted to address the "need therefore for a unified and strong revival for the meaning of the Eucharist in the life of the church."

During a news conference at the conclusion of the day's meeting, Bishop Rhoades said that the committee had no plans to develop a statement on the Eucharist despite the conference's strategic plan until Archbishop José H. Gomez of Los Angeles, USCCB president, asked it to develop a document on "eucharistic consistency" earlier this year.

He also told reporters that May 7 correspondence from Cardinal Luis Ladaria, prefect of the Congregation for the Doctrine of the Faith at the Vatican, to Archbishop Gomez influenced the committee's thinking on the document.

Cardinal Ladaria in his letter urged the U.S. bishops to proceed with caution in their discussions about formulating a national policy "to address the situation of Catholics in public office who support legislation allowing abortion, euthanasia or other moral evils."

"We took that (national reference) out even though our intention wasn't to develop national norms. Our plan wasn't to go in that direction," Bishop Rhoades said.

The third part of the document drew the broadest objections from more than a dozen bishops, who said that it appears to single out a single category of Catholics -- those in political life who support keeping abortion legal.

Bishop Robert M. Coerver of Lubbock, Texas, said he was concerned the document was being developed in time to be used as a political cudgel given that congressional elections are on tap for 2022 with a presidential campaign two years later.

Other bishops expressed concern that the process to adopt the document appeared to be "rushed."

Bishop Rhoades responded during the discussion that the timeline proposed was based on the other factors, including the desire to fall in line with the conference's strategic plan.

Bishops who expressed concern about the document said they could support it if the third section was dropped in favor of a text that would stress Catholic theology.

However, bishops who supported drafting the document said there was no need drop the third section given the importance for all Catholics to discern how they live the teachings each time before they receive the Eucharist.

They also said they saw no need to delay the document. If the bishops approve the development of a draft document, the committee plans to submit it for the bishops' next general assembly in November, to be held in person.

A consensus seemed to develop around a proposal from Bishop Michael W. Warfel of Great Falls-Billings, Montana, who suggested that the bishops convene regional gatherings throughout the summer to discuss the content of the document.

Several prelates, among them Cardinal Wilton D. Gregory of Washington, expressed concern that adopting a document at a time when there is division among the bishops would further threaten the unity of the bishops' conference and the church overall.

"We need to spend time, personal time, in candid straight-forward conversation together to strengthen the unity within our conference and with our people before taking the next steps on a statement or plan of action," he said.