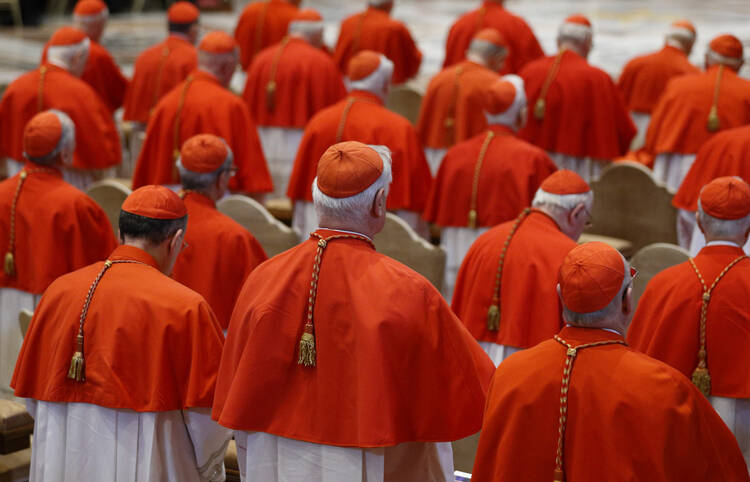 On Monday, Crux reported that “The Better Church Governance Group,” a new organization backed by wealthy Catholics, is planning to spend $1 million in the next year to create a “Red Hat Report,” which will evaluate cardinals worldwide on their handling of accusations of clerical sex abuse or cover-up. Here are five points to consider in light of this news.

1. Politics moves faster than the church.

The church moves slowly. Politics does not. The Catholic Church has to proceed carefully, and Pope Francis, in particular, has weighed his actions cautiously. But much of the rest of the world will not wait. Thus, while it is far from clear what the response of the U.S. Conference of Catholic Bishops or Pope Francis will be to the clerical sex abuse scandals in the United States, this group of donors and activists have gotten to work.

The Catholic Church has to proceed carefully. But much of the rest of the world will not wait.

The church can use the speed of politics to its advantage, as in the case of prelates who have welcomed investigations by state attorneys general into their dioceses record on sexual abuse. But this story is a reminder that the church will often appear flat-footed and on the defensive in such dynamics.

2. The laity are citizens, too.

In recent months, Catholics have stepped up calls for the laity to take the lead on clerical sex abuse investigation and reform. But the furor among some Catholic over this report reminds us that the laity are citizens, too: They will come to reform efforts with political agendas.

This is an obvious point, but it raises an uncomfortable truth: At least in the U.S. context, the laity who are to take a greater role in church governance are often the same people who are deeply divided on every political, social and economic issue imaginable.

Most calls for increased lay participation in the church envision the laity working within ecclesial structures, which would make them different from “The Better Church Governance Group.” But we can wonder what role political ideology will play even there. The church will have to renew its efforts to prevent reproducing ideological conflict within its membership.

The laity are citizens, too: They will come to reform efforts with political agendas.

Given that some have accused certain bishops of ideological biases, however, perhaps the increasing participation of the laity will spur a healthy conversation about the relationship between politics and the Gospel within the church.

3. Outside groups will attempt to define the terms of this debate.

The church has often spoken in the corporate language of “accountability” and “transparency” when it talks about clerical sex abuse, and that is not necessarily bad. But it is not a language native to the church, and it does not reflect the full reality of the church.

This is not just a language issue. The language used around clerical sex abuse reflects the criteria by which the church is to be judged. In the case of “The Better Church Governance Group,” many are rightly worried that the group will judge church leaders on the grounds of conservative political ideology rather than on those of the Gospel. We can also expect that many criticisms of the group will be based on a similarly political perspective, only from a liberal rather than conservative point of view.

It was perhaps only a matter of time before lay people would take it upon themselves to investigate church scandals.

For the church to avoid being saddled with alien expectations, it will need to develop and promulgate criteria of its own. As the “Red Hat Report” episode has revealed, those criteria should be distinct from political ideologies. Promoting a language more authentic to the church—one of sin, reparation, mercy and holiness—would not only allow the church to transcend such debates but would also allow it to enter more fully into its own mission.

4. Everyone is in the hot seat.

The “Red Hat Report” aims, in principle, to investigate every active member of the College of Cardinals. While the report may well end up targeting only cardinals disliked by the donors and activists behind the investigation, the implication of the hypothetically broad remit of the report is shocking: No one is above suspicion.

What can the bishops do to help heal the Church?
John J. Strynkowski

Thus far, the investigation of clerical sex abuse has been primarily a Western phenomenon, particularly where either victims have had the resources and agency to speak out or where political and judicial actors have had the resources and autonomy to ferret out such injustices. It is perhaps not a surprise, then, that sex abuse scandals have not been as prominent coming out of the developing world.

What can the church do to uncover clerical sex abuse where such resources, agency and autonomy are lacking? Relying upon wealthy and politically motivated lay groups is not the answer to this problem. But what is?

5. None of this is surprising.

While the “Red Hat Report” is a surprising development for many, it should not be: The hierarchy of the church has lost credibility in many quarters, and the usual sources of power are generally held in deep suspicion in our time. With citizens worldwide ambivalent about political and social institutions, it was perhaps only a matter of time before lay people would take it upon themselves to investigate the scandals independent of ecclesial structures.

Moreover, it is not surprising that this “Better Church Governance Group” has emerged in the United States, which has become both a flashpoint for many intra-ecclesial conflicts and a deep reservoir of suspicion toward power. Now those dynamics are intersecting in ways that deeply challenge the life of the church.

A version of this article originally appeared in The Jesuit Post.

The cardinals and bishops appear to be unwilling to be accountable for their part in protecting sexual predators. So a group of laity wants to call them to account through investigating them. There's going to be a huge loss of face one way or another.

It is curious how The Napa Institute didn't launch any type of initiative when Pope John Paul II and Benedict XVI hid Bernard Cardinal Law in the Vatican from 2002 forward, how JPII and B16 coddled Fr. Marcial Maciel Degollado, founder of the Legionairies of Christ in spite of Maciel's disgusting sexual predatory behaviors, and Tim Busch told the NY Times that Carlo Maria Vigano had done a great service in his "testimony" and "noted that Viganò had assured him that retired Pope Benedict XVI had confirmed Viganò's account."

Who is investigating Tim Busch? Oh, Abp. Charles Chaput, when he is not slinging mud at Pope Francis in "First Things".

#2 - “the laity who are to undertake a greater role in church governance” - seriously!? How is that suppose to happen? The clergy have ALL the power, do you see them giving any portion of it up?

American's need a more nuanced understanding of how power works... Just because Donald Trump is the President do you think he makes all the decisions?

There are a lot of lay people at work in ecclesial structures. Yes, the clergy hold the offices, but they still have scores of advisors... Just think of your local parish. Is your Pastor really that monolithic of an authoritarian in your church community? Or are there councils of laity to help support the mission and structures of your parish?

The Red Hat Group makers are rich conservatives who consider a church that treats women as equal human beings a liberal church not a just church. Shame on them as much as shame on the Cardinals who also support those beliefs.

Fact: sexism causes an increase of pedophilia in all groups where there are men, women and children affected by the sexist group's influence in any way.

Fact: Sexism played a large role in our abuse crisis by clergy of children and will continue to do so while we tolerate women being treated less important, less sacred and not worthy of equal ordained priesthood, and less intelligent by not allowing them equal votes at governing meetings and trials such as synods.

Better Church Governance is as guilty as our bishops and cardinals who turned their heads away from children being abused because they have already publicly declared they too are willing to turn their heads away from the Sexism that definitely and greatly helped to cause that abuse and will cause the same abuse in the future. SHAME ON ALL OF YOU WOMEN AND CHILDREN HATERS. GOD BE ALL OF YOUR JUDGES!