Black spirituals meet the liturgy: Why I composed a Mass for Black Catholics 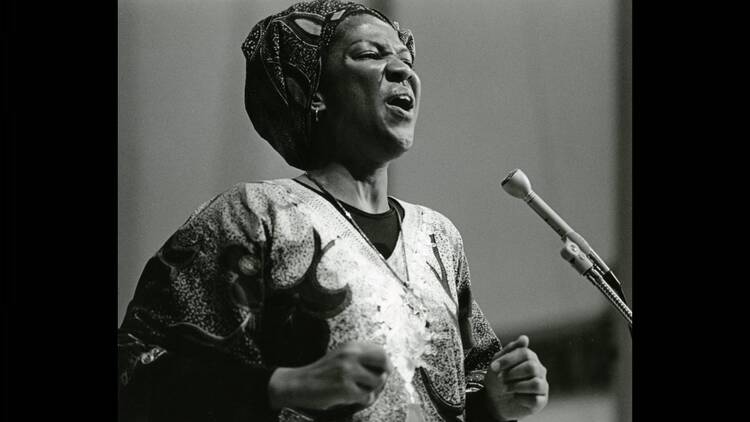 The late Sister Thea Bowman, a Franciscan Sister of Perpetual Adoration from Canton, Miss., was nationally known for her work to advance the life of her fellow black Catholics in the church. She considered Negro spirituals essential to the education of Black students in her home parish. (Undated photo from CNS photo/Michael Hoyt)

Listen! Hear us! While the world is full of hate, strife, vengeance, we sing songs of love, laughter, worship, wisdom, justice, and peace because we are free. Though our forefathers bent to bear the heat of the sun, the strike of the lash, the chain of slavery, we are free. No man can enslave us.
– Spoken by Servant of God Sister Thea Bowman, F.S.P.A., on a 1967 LP recording of spirituals, featuring the Holy Child Singers, called “The Voice of Negro America”

Servant of God Sister Thea Bowman, the sole African American member of the Franciscan Sisters of Perpetual Adoration, considered Negro spirituals essential to the education of Black students in her home parish, Holy Child Jesus School and Mission in Canton, Miss. Segregation, violence against civil rights activists, the hard work of voter registration in the Black community, and tear gas attacks on peaceful protesters in Canton, among other events, preoccupied the minds and spirits of her high school students.

This historic and traditional music was the song of her and their people. It reflected the experience, thoughts, sorrows, joys and spirituality of their enslaved and free ancestors.

To their instruction Sister Thea added the singing of Negro spirituals. This historic and traditional music was the song of her and their people. It reflected the experience, thoughts, sorrows, joys and spirituality of their enslaved and free ancestors. It told stories of fictive biblical forebears the people had taken as their own. Through spirituals her students sang out for justice, lamented oppression, resisted white supremacist ideas about their humanity and expressed their people’s enduring hope.

Spirituals, an early foundational music of the African American experience, emerged from the moans, cries, chants, rhythms, harmonies and traditions of peoples stolen from their West African and Caribbean homelands. They practiced African and Caribbean traditional religions, Catholicism in the Kingdom of the Kongo, and they brought Islam with them as well. The enslaved spoke indigenous languages such as Kikongo, Fon, Igbo, Akan and Taino, original to the Caribbean. They also conveyed languages and influences derived from European contact: Portuguese, English, Spanish, French, Creole and Dutch. The brutal crucible of chattel slavery forged these diverse peoples into a people in what became the United States.

This historic and traditional music was the song of her and their people.

The musical culture and idioms shared by the peoples included call-and-response song, communal singing, the inclusion of improvised additions to the music, as well as music and dance as essential elements of African spiritualities. Based on these origins, spirituals invite full engagement of the mind, spirit and body while expressing the existential realities of the community. Black Catholics were part of the original creating communities of the Negro spirituals, a fact unknown in popular and even official church liturgical circles.

By the time Sister Thea sang spirituals with her students in the mid 1960s, pieces from this tradition were in use as hymns for liturgy within and beyond the Black Catholic community of the United States. Concurrently, pioneering Black Catholic composer Father Clarence Joseph Rivers composed Masses based on the musical idioms of spirituals, gospel and jazz. Sister Thea and Father Rivers, in their roles as scholars (both held Ph.D.s) and people of faith, took the spirituals seriously. Father Rivers, however, specifically decided against quoting the melodies of spirituals directly. He described such attempts as “shot-gun weddings” consisting of pre-existing melodies mismatched with incompatible texts. Both Father Rivers’s “Mass Dedicated to the Brotherhood of Man” and a widely respected preface article by Sister Thea appeared 20 years later in the first edition of the Black Catholic hymnal, Lead Me Guide Me, published by GIA Publications Inc. in 1987.

This hymnal, dedicated to Father Rivers, contained a variety of musical genres in use within Black Catholic communities, including Mass settings and compositions of Black Catholic composers, gospel music, Gregorian chant, European, and European American and African hymns. Spirituals, songs of faith and freedom that chronicle the cultural, civic and theological history of African Americans, comprised 18 percent of the hymnal’s musical entries.

The collection of music in the Lead Me Guide Me hymnal filled a need within the Black Catholic community. It brought together, for liturgical use, what had previously been passed down through oral tradition alongside music that had been composed and notated but was scattered in disparate sources. What lingered for Black Catholic musicians and liturgists was the idea of a “parody Mass.” In the musical world, parody refers not to a comedic portrayal but to a setting for the Mass that is based on pre-existing music. In this case, Black Catholic musicians hoped for a Mass based on the melodies of spirituals that incorporated the official liturgical text of the Roman Catholic Church. Use of the idioms of Black sacred song represents an aspect of liturgical inculturation and the artistic genius of the Black community. Could not such a Mass unite the history, traditions, idioms, spirituality and culture of African Americans, even closer to the textual, ritual and spiritual dimensions of the Eucharistic liturgy?

Use of the idioms of Black sacred song represents an aspect of liturgical inculturation and the artistic genius of the Black community.

Musicians in Black Catholic communities made attempts at parody Mass parts and even complete Mass settings with varying degrees of success. I began researching the publicly available pieces from both Catholic and Episcopal Church traditions in addition to gathering oral evidence from Black Catholic parishes. Based then on my deep love for the tradition, and my theological studies of the genre with professors such as Dr. James H. Cone and Dr. Janet Walton, S.N.J.M., and my role as an artist, educator and cantor, I settled on the creation of a Mass of spirituals for my doctoral work in Worship and the Arts at Union Theological Seminary in New York.

Working in 2009 with the director of Union’s gospel choir, M. Roger Holland II, the prolific composer of the “Sound of My People” Mass, we devised a process. Each spiritual, in folk melodic form, was chosen to be rendered literally based on a combination of style, tempo, historical and theological themes, as well as their liturgical “fit.” We chose melodies from a selection of widely known spirituals as published in the Lead Me Guide Me hymnal and the Songs of Zion hymnal published by Abingdon Press. The text was from the proposed Revised Order of Mass from 2010. After making possible choices for each Mass part, we drew on our historical knowledge of the spirituals and musical experience as leaders of song in Black Catholic worshipping communities.

We then sent each Mass part out for “tasting” with colleagues, friends, family and Black and white worship communities. We also let them sit in our own spirits. How did they work? How did they feel? Did the historical and current memory of the spiritual enhance or distance from the liturgical action? Did the body and spirit memory of a song confirm its possible use within a liturgical gathering? Needless to say, some parts "tasted" better than others. Once the Mass was completed, it was published by GIA Publications and included as a complete Mass setting in the second edition of the Lead Me Guide Me hymnal. Then the real tasting in widespread communities began.

We did not choose the spiritual "I'm Gonna Sit at the Welcome Table" as source material for a Mass part. It became obvious, however, that this spiritual was appropriate for the title of the project. Historically, in all parts of the United States, Black Catholics experienced hostility when they attempted to receive Eucharist in racially mixed settings. Bishops and priests displayed visible disdain and could not bear their approach. Segregation of Black Catholics during worship was also widespread. They were forced to sit in balconies, back rows and basements, receiving Eucharist last, after white worshippers went forward.

Podcast: Gloria Purvis on why the pro-life movement has been silent on racial justice
Jesuitical

In contrast to these and other racially based microagressions and macroaggressions, the powerful image of an inclusive heavenly banquet in the “Welcome Table” spiritual is potent and authoritative. The enslaved and free longed deeply for God’s welcome and social and political acceptance, as did Sister Thea and her students in Canton, Miss. This longing continues in our own time, so filled with hate, strife and vengeance.

May the singing of this Mass, the bringing forward of this history through the spirituals and especially the gathering of our communities around an inclusive welcome table be life-giving, encouraging, healing, sustaining and help to lead us toward the right relationships implied in the word justice. 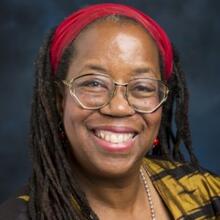 Kim R. Harris is assistant professor of African American Thought and Practice in the department of theological studies at Loyola Marymount University in Los Angeles.