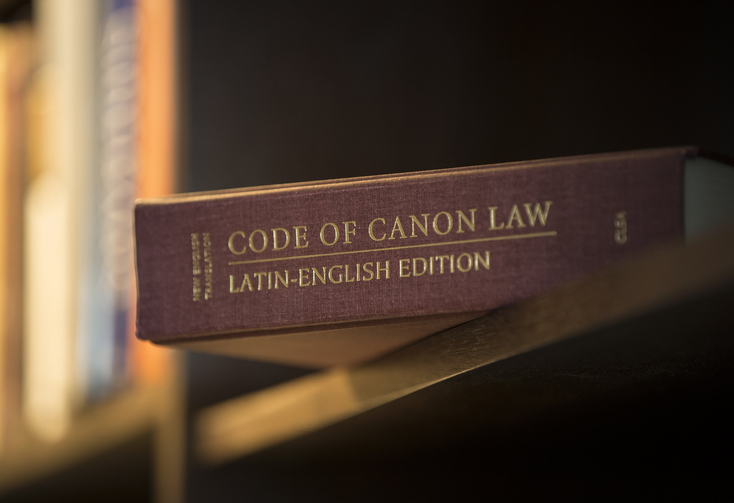 A Latin-English edition of the Code of Canon Law is pictured on a bookshelf. New canon law provisions approved by Pope Francis are expected to help the Catholic Church safeguard against abuse. (CNS photo/Nancy Phelan Wiechec)

After 17 years of preparation, a new edition of volume VI of the Code of Canon Law—the Vatican’s penal code—has been published, the first new edition since 1983. About two-thirds of the canons, or laws, in the volume have been updated, and a number of new canons have been added, most significantly in the areas of sexual abuse and requiring penalties for violations of the law.

On this episode of “Inside the Vatican,” host Colleen Dulle and veteran Vatican correspondent Gerard O’Connell walk through the changes to canon law on sexual abuse, women’s ordination, and financial mismanagement.

Explainer: Cardinal Marx wasn’t accused of sexual abuse or cover-up. So why has he offered to resign?
Gerard O’Connell

“What the law has tried to do and what his new Book VI of the Code of Canon Law is doing with the penalties is to reduce, as far as possible, the loopholes, to ensure justice for those who have been victims, to ensure proper exercise of authority by those who are in authority and hold penalties for failure to exercise authority properly,” Gerry said. “And also to guarantee to the wider public, to the people of God, the people in the church and outside the church, that they will know that such criminal acts are not acceptable and they will be punished.”

After their conversation, Colleen gives updates on the discovery of the remains of more than 200 Indigenous children on the grounds of a former residential school in Canada and the unexpected offer of resignation from Cardinal Reinhard Marx, which Pope Francis rejected today.