Pope Francis rejects Cardinal Marx’s offer of resignation, calls on all bishops to take responsibility for the abuse crisis 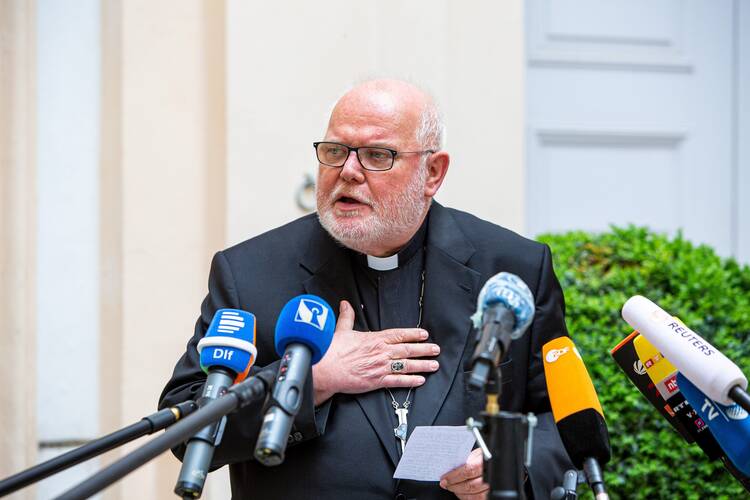 Pope Francis has rejected Cardinal Reinhard Marx’s offer of resignation and told him to continue as archbishop of Munich and Freising and dedicate himself to pastoral care and the renewal of the church.

The Vatican announced this at midday, June 10, when it published the pope’s three-page letter to the German cardinal, written originally in Spanish, and translated into German. (The translation that follows here has been done by the author.)

Francis, who knows the 67-year-old cardinal well, took less than three weeks to reach his clear-cut decision. He provides a profoundly faith-filled rationale for his decision in the letter, which is a response to the May 21 letter of resignation presented to him by the cardinal when they met in the Vatican just over two weeks ago.

Significantly, however, Francis goes beyond responding to the cardinal’s reasons for offering his resignation and addresses in an incisive way the entire abuse crisis that has brought the Catholic church to its knees in Germany and many other countries. He agrees with Marx in calling it “a catastrophe,” and said “every bishop of the church must take it up and ask himself ‘what must I do in the face of this catastrophe?’”

Speaking as pastor of the whole church, he calls on every bishop, and the church as a community, to abandon “the politics of the ostrich,” and “the silences, the omissions, and giving too much weight to the prestige of the institutions and denials,” which, he said, “only lead to personal and historical failure” and cause us “to live with the weight of keeping skeletons in the cupboard.”

He said, “It is urgent ‘to air’ this reality of the abuses and of how the church should proceed, and let the Spirit lead us to the desert of desolation, to the cross and the resurrection.” He insisted, “We must follow the path of the Spirit, and the point of departure is the humble confession: we have gone wrong, we have sinned.”

He asked every bishop and the church communities to open themselves to the Spirit and to take responsibility for “the many errors of the past and present,” make a “mea culpa” for them, and through confession, the admission of sin, and repentance, to seek to do reparation and in this way bring about the reform that leads to resurrection.

Speaking as pastor of the whole church, the pope calls on every bishop, and the church as a community, to abandon “the politics of the ostrich.”

Pope Francis began his letter by thanking the cardinal “for your courage,” which he said, “is a Christian courage that does not fear the cross and does not fear to be overwhelmed in the face of the tremendous reality of sin.” He recalled “that’s what the Lord did” and told Marx, “It’s a grace that the Lord has given you, and I see that you want to take it on and to safeguard it so that it bears fruit. Thank you!”

After recalling that the cardinal had told him that he “is going through a moment of crisis” and that “the church in Germany is living this too,” Francis remarked, “The whole church is in crisis because of the abuse affair.” He emphasized that “the church today cannot take a step forward without taking on this crisis” and said, “The politics of the ostrich leads nowhere, and the crisis needs to be taken into our paschal faith.”

Pope Francis dismissed the mere sociological or psychological approaches to this crisis as “of no use.” (He referred to them as “sociologisms” and “psychologisms”). He insisted that “To take up the crisis, personally and as a community, is the only fruitful way forward because one does not exit from a crisis alone but in community and then we must take into account that one exits from a crisis either better or worse, but never the same.”

The pope insisted that “To take up the crisis, personally and as a community, is the only fruitful way forward.”

Francis warned against “the danger of not accepting the crisis and taking refuge in conflicts, (which is an attitude that ends up by stifling and impeding all possible transformation.)” He explained that “the crisis offers a seed of hope” whereas “the conflict, on the contrary, [brings] desperation.” He said, “the crisis involves [engages] one, the conflict on the other hand entangles and provokes the sanitized attitude of Pilate, ‘I am innocent of this man’s blood. Look to it yourselves’” (Mt 27:24). He said Pilate’s attitude “has done and does us a lot of evil.

He recalled that Cardinal Marx told him that since last year he had “been reflecting” on the crisis and what it meant for him, and commending this said, “You set out on a journey, seeking the will of God with the decision to accept it whatever it be.”

Pope Francis told the cardinal, “I agree with you in qualifying as a catastrophe the sad history of the sexual abuses and the way of facing it that the church had adopted up to a short time ago.” He added, “To become aware of this hypocrisy in the way of living the faith is a grace; it is the first step we must take. We must take responsibility for this history, both personally and as a community. One cannot remain indifferent in front of this crime. To take it on means to put oneself in crisis.”

But he noted that “not everyone wants to accept this reality, but it is the only way, because to make ‘proposals’ for a change of life without putting the meat on the grill leads nowhere.” Francis said, “The personal, social and historical realities are concrete, and they should not be taken as ideas; because ideas are discussed (and it is good that it is so); however the reality must be faced and discerned.” He acknowledged, “It is true that historical situations have to be interpreted with the hermeneutic of the epoch in which they happened” but, he said, “this does not exempt us from taking responsibility for them and accepting them as the history of ‘the sin that besieges us.’ In my view, therefore, every bishop of the church must take it up and ask himself ‘What must I do in the face of this catastrophe?’”

In my view, therefore, every bishop of the church must take it up and ask himself “what must I do in the face of this catastrophe?”

In words that clearly go beyond the cardinal, Pope Francis stated, “We have to make the ‘mea culpa’ in the face of the many historical errors of the past more than one time and before the many situations, even if we have not personally participated in this historical conjuncture.” He insisted, “It is this very attitude that is asked of us today. We are asked for reform which, in this case, does not consist in words but in attitudes that have the courage to put oneself in crisis and to face up to reality whatever the consequence.” He emphasized again that “every reform begins with oneself” and said: “Let ourselves be reformed by the Lord. It is the only way. On the opposite way we will be no more than ‘ideologues of reforms,’ where we do not put our own flesh [self] at stake.”

Then in a biblical turn that requires some decoding, Pope Francis said, “The Lord never accepts ‘the reform’ (permit me the expression) neither with a pharisaical project, nor that of the Sadducee or the zealot or the Essene.” He underlined that the “only” way to do reform is “if we do it with one’s own life, one’s history, with one’s flesh on the cross. That is the way!” And addressing Cardinal Marx, he said “[It is the way] you yourself, dear brother, took on in presenting your renunciation.”

He commended the cardinal for saying in his letter that “burying the past leads nowhere,” and remarked, “The silences, the omissions, giving too much weight to the prestige of the institutions only leads to personal and historical failure, and brings us to live with the weight of ‘keeping skeletons in the cupboard,’ as the saying goes.”

“It is urgent ‘to air’ this reality of the abuses and of how the church should proceed, and let the Spirit lead us to the desert of desolation, to the cross and the resurrection.”

Pope Francis said, “We will be saved by opening the door to the One who can do it and to confess our nakedness” [saying], “I have sinned,” “we have sinned” and to cry and babble as we can to Him [and say] “go away from me because I am a sinner.” He said, “this is the inheritance that the first pope left to the popes and bishops of the church.” He added, “if we do this, then we will feel this healing shame which opens the doors to the compassion and tenderness of the Lord who is always close to us.”

Francis said, “As a church we must implore the grace of shame” and [ask] “the Lord that he saves us from being the shameless prostitute of Ezekiel 16.”

Explainer: Cardinal Marx wasn’t accused of sexual abuse or cover-up. So why has he offered to resign?
Gerard O’Connell

He told Cardinal Marx that he liked how he had ended his letter of May 21, when he told the pope: “I continue to enjoy being a priest and a bishop of this church and I will keep committing myself in pastoral matters, wherever you deem it reasonable and useful. In the next years of my service, I would like to increasingly dedicate myself to pastoral care and support and ecclesiastical renewal of the church which you also call for incessantly.”

Pope Francis concluded his letter of response to the cardinal’s offer of resignation with these memorable words: “This is my response, dear brother. Continue as you propose but as archbishop of Munich and Freising. And if the temptation comes to you to think that, in confirming your mission and not accepting your resignation, this bishop of Rome (your brother who loves you) does not understand you, think of what Peter felt before the Lord when, in his way, he presented his resignation [saying]: ‘Depart from me, for I am a sinner,’ and listen to the [Lord’s] response: ‘Feed my sheep.’”

He signed the letter: “With brotherly affection. Francis.”