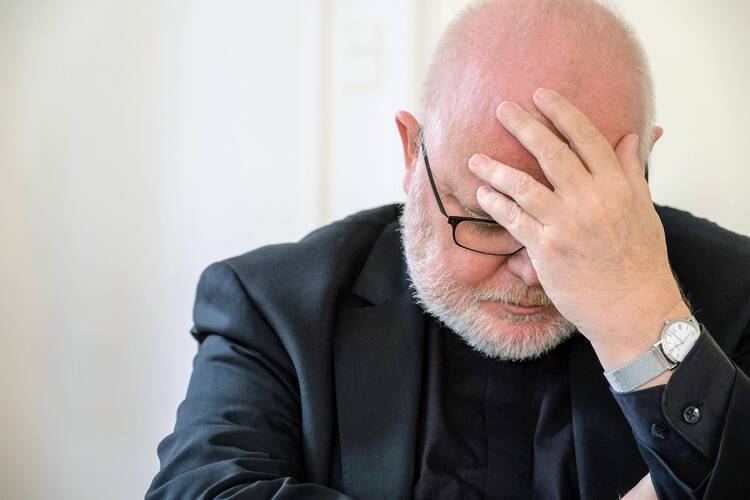 Cardinal Reinhard Marx of Munich and Freising, Germany, has submitted his resignation to Pope Francis, saying that bishops must begin to accept responsibility for the institutional failures of the church in handling the clerical sexual abuse crisis.  (CNS photo/Norbert Neetz, KNA)

In a decision that has sent shock waves through the German Catholic Church, Cardinal Reinhard Marx, 67, the archbishop of Munich and Freising, revealed that on May 21 he met Pope Francis in the Vatican and handed him his letter of resignation, with a strong plea that the pontiff accept it. He said Francis asked him to continue serving as bishop of the archdiocese until he has made a decision on his request.

In a declaration issued today, Cardinal Marx said: "It is important to me to share the responsibility for the catastrophe of the sexual abuse perpetrated by representatives of the church over the past decades."

He continued: “It was an exclusively personal decision to hand in my resignation and ask for acceptance of the same. With my resignation, I would like to make clear that I am willing to personally bear responsibility not only for any mistakes I might have made but for the church as an institution, which I have helped to shape and mould over the past decades.”

The cardinal’s decision comes at a time when there is a major crisis in the other large German diocese of Cologne linked to the abuse scandal and pastoral management of the archdiocese.

He added: “This decision is not easy for me. I like being a priest and bishop and hope that I can continue to work for the church in the future. My service for this church and the people does not end. However, to support a new beginning which is necessary, I would like to bear my share in the responsibility for past events. I believe that the ‘dead end’ we are facing at the moment can become a “turning point.” This is my paschal hope and I will continue praying and working for it to happen.”

The cardinal’s unexpected decision comes at a time when there is a major crisis in the other large German diocese of Cologne, a crisis that is not only linked to the handling of the abuse scandal but also relates to the pastoral management of this archdiocese of 1.9 million Catholics by Cardinal Rainer Maria Woelki, 65, who has rejected many calls for his resignation. Pope Francis has ordered an apostolic visitation of the diocese.

In addition to this, and even as the synodal path continues, the president of the important lay Central Committee of the German Catholics (ZDK), Thomas Sternberg, has also announced his decision to step down in November.

“Without doubt, these are times of crisis for the church in Germany,” and “there are, of course, many reasons for this situation—also beyond Germany in the whole world,” Cardinal Marx stated in his letter to Francis, which has been made public with the permission of the pope.

Without examining all the reasons for this situation, the cardinal told the pope, “This crisis has also been caused by our own failure, by our own guilt.” He said: “This has become clearer and clearer to me looking at the Catholic Church as a whole, not only today but also in the past decades. My impression is that we are at a ‘dead end’ which, and this is my paschal hope, also has the potential of becoming a ‘turning point.’

“Since last year, I have thought about this [situation] more thoroughly and have asked myself what this means for me personally, and I have decided—encouraged by the Easter period—to ask you to accept my resignation as archbishop of Munich and Freising,” he said.

Cardinal Marx recalled that he has been a priest for 42 years and bishop for 25 years. He was first a bishop as auxiliary in Paderbon in 1996, then as bishop of Trier in 2001, and since 2007 as archbishop of Munich-Freising, an archdiocese with over 1.8 million Catholics and over 1,000 diocesan priests.

“The investigations and reports of the last ten years have consistently shown that there have been many personal failures and administrative mistakes but also institutional or systemic failure,” he stated.

He recalled that “the recent debates have shown that some members of the church refuse to believe that there is a shared responsibility in this respect and that the church as an institution is hence also to be blamed for what has happened and therefore disapprove of discussing reforms and renewal in the context of the sexual abuse crisis. I firmly have a different opinion.”

The cardinal emphasized that “both aspects have to be considered: mistakes for which you are personally responsible and the institutional failure which requires changes and a reform of the church.” He said he believes that “a turning point out of this crisis is only possible if we take a ‘synodal path,’ a path which actually enables a ‘discernment of spirits,’ as you have repeatedly emphasised and reiterated in your letter to the church in Germany.”

“I feel that through remaining silent, neglecting to act and over-focussing on the reputation of the Church I have made myself personally guilty and responsible.”

Cardinal Marx, who was president of the German Bishops Conference from 2014 to 2020, told the pope: “It is painful for me to witness the severe damage to the bishops’ reputation in the ecclesiastical and secular perception which may even be at its lowest. To assume responsibility, it is therefore not enough in my opinion to react only and exclusively if the files provide proof of the mistakes and failures of individuals. We as bishops have to make clear that we also represent the institution of the church as a whole.”

“It is not right to simply link these problems largely on past times and former church officials, thereby ‘burying’ what happened,” he said.

Speaking for himself, he said, “I feel that through remaining silent, neglecting to act and over-focussing on the reputation of the church I have made myself personally guilty and responsible.” While his remarks left some in Germany wondering whether he too may have responsibility in this field in the two dioceses that he has led—Trier and Munich-Freising, where reports on the abuse question have yet to be published—the cardinal has made clear that this was not the decisive factor in his decision to hand in his resignation.

He recalled that “only after 2002 and even more since 2010, those affected by sexual abuse have been brought to the fore more consequently,” but he said, “this change of perspective has not yet been completed.” He told the pope that “overlooking and disregarding the victims was certainly our greatest fault of the past.”

Cardinal Marx told the pope that in the aftermath of the MHG survey commissioned by the German Bishops’ Conference, “I stated in the cathedral of Munich that we have failed.”

He was referring here to the MHG survey published in 2019, which revealed that “1670 persons belonging to the Catholic clergy who were accused of sexual abuse of minors were identified from their personnel files, corresponding to 4.4% of the clergy overall. 3677 victims of sexual abuse could be linked to the accused persons; 62.8% of them were male, and 66.7% were under 14 years old when the abuse took place.”

Podcast: Pope Francis wants the next synod to be a ‘synodal process.’ Is it possible?
Inside the Vatican

Commenting on his remark, “we have failed,” the cardinal in his letter to Pope Francis added: “But who is this ‘We’? In fact, I also belong to this circle. And this means that I must also draw personal consequences from this. This is becoming increasingly clear to me.”

“I believe one possibility to express this willingness to take over responsibility is my resignation,” Cardinal Marx said. “In doing so, I may be able to send a personal signal for a new beginning, for a new awakening of the church, not only in Germany. I would like to show that not the ministry is in the foreground but the mission of the Gospel. This too is an element of the pastoral care. I therefore strongly request you to accept this resignation.”

Sources in Germany say that what the cardinal described as a “very personal decision” has been well accepted there, where victims have long waited for someone at this level to take responsibility for the church as an institution and for its past failings in regard to abuse.

He concluded his letter to the pope with these words: “I continue to enjoy being a priest and a bishop of this church and I will keep committing myself in pastoral matters, wherever you deem it reasonable and useful. In the next years of my service, I would like to increasingly dedicate myself to pastoral care and support an ecclesiastical renewal of the church, which you also call for incessantly.”

Cardinal Marx has enjoyed a good relationship with Francis since his election as pope. He has been a member of the council of cardinal advisors since 2013 and is also president of the Council for the Economy. Whatever the pope’s decision on his request to resign as archbishop of Munich and Freising, the cardinal is expected to keep both these important roles in the coming years.