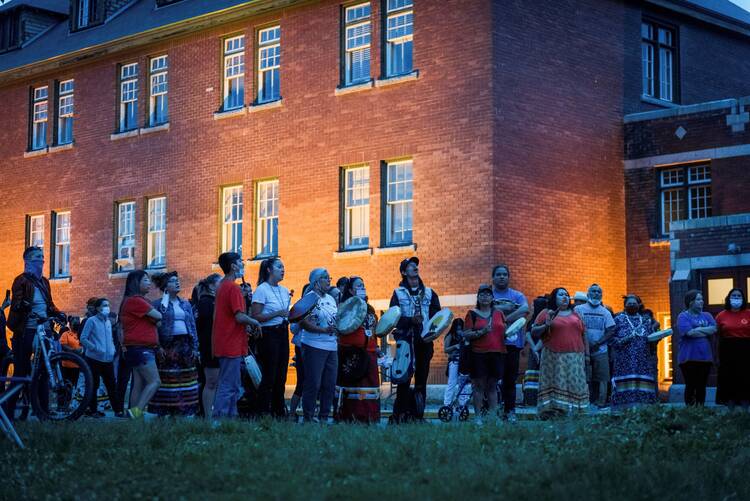 Kamloops residents and First Nations people gather to listen to drummers and singers at a memorial in front of the former Kamloops Indian Residential School in British Columbia May 31, 2021. Indigenous leaders and residential school survivors in Canada are calling on officials to conduct a thorough investigation of every former residential school in the country after the remains of more than 200 children were found on the grounds of the Kamloops school. (CNS photo/Dennis Owen, Reuters)

Pope Francis today expressed his “pain” at the shocking news coming from Canada of the discovery of the remains of 215 children who were students in the Kamloops Indian Residential School in the province of British Columbia.

He invited pilgrims in St. Peter’s Square to pray the Angelus on June 6 to join him in a silent prayer for “the dead children” and for “the families and communities of the Indigenous peoples of Canada crushed by pain.”

It was his first public statement on this tragic situation since the news broke earlier this week.

He told those present and a global audience following online, “I join the Canadian bishops and the whole Catholic Church in Canada in expressing my closeness to the Canadian people traumatized by the shocking news.”

He said, “The sad discovery heightens even more the awareness of past pain and suffering,” and he expressed the hope that “Canadian political and religious authorities may continue to cooperate with determination to shed light on that sad situation and to commit themselves humbly to a path of reconciliation and healing.”

“Canadian political and religious authorities may continue to cooperate with determination to shed light on that sad situation and to commit themselves humbly to a path of reconciliation and healing.”

Pope Francis said, “These difficult moments strongly urge us all to distance ourselves from a colonizer model, and also from the colonizing ideologies of today, and to walk side by side in dialogue, in mutual respect and in acknowledging the rights and cultural values of all the sons and daughters of Canada.”

He concluded his remarks by inviting those present and the global audience that was following online to join him in a silent prayer for the dead children and for the families and communities of Canada’s indigenous peoples who have suffered so much.

“We entrust to God the souls of all the children who died in the residential schools of Canada and we pray for the families and communities of the Indigenous peoples of Canada crushed by pain,” he said.

According to the BBC, the Kamloops residential school was the largest of more than 130 similar schools. It said the school, which operated between 1890 and 1969, held up to 500 Indigenous students at any one time, many sent to live at the school hundreds of miles from their families. Between 1969 and 1978, it was used as a residence for students attending local day schools.

The BBC said the residential schools were operated in Canada between 1874 and 1996 and were “a linchpin in the government’s policy of forced assimilation.” It added that “some 150,000 First Nations, Métis and Inuit children were taken from their families during this period and placed in state-run boarding schools. When attendance became mandatory in the 1920s, parents faced threat of prison if they failed to comply.”

The BBC said, “The policy traumatized generations of Indigenous children, who were forced to abandon their native languages, speak English or French and convert to Christianity. Christian churches were essential in the founding and operation of the schools. The Roman Catholic Church in particular was responsible for operating up to 70 percent of residential schools, according to the Indian Residential School Survivors Society.”

“These difficult moments strongly urge us all to distance ourselves from a colonizer model, and also from the colonizing ideologies of today."

The pope’s statement comes after Prime Minister Justin Trudeau of Canada had earlier called on the church to take its part of the responsibility for the running of the schools. Already in 2017, Mr. Trudeau visited Pope Francis in the Vatican and asked him to come to Canada and apologize on behalf of the church as requested by the Truth and Reconciliation Commission.

Sources in Rome told America that Francis had discussed the issue of these schools with the Canadian bishops during their ad limina visit to Rome in 2017 and the possibility of his going to Canada to ask pardon of the country’s Indigenous peoples for past wrongs perpetrated by the church in that land. It seems Francis was willing to go to Canada, but there was not consensus among the bishops for this, and so his visit remains in suspense.

Last Wednesday, after the news broke, Canada’s CTV reported that the Catholic archdiocese of Regina had released an apology statement recognizing its role in operating four residential schools in the area and its moral obligation to assist in healing where wanted.

Archbishop Donald Bolen, a leader in this field among the Canadian bishops, said what he has heard most in these years is the desire for the church to take responsibility for its actions. “Responsibility in the archdiocese means looking to the four nations where there was a residential school and where there are cemeteries and to enter conversations there,” the archbishop said. CTV reported that the archdiocese is in active conversations with Indigenous leaders and communities on steps it can take to reconcile and mend broken relationships.