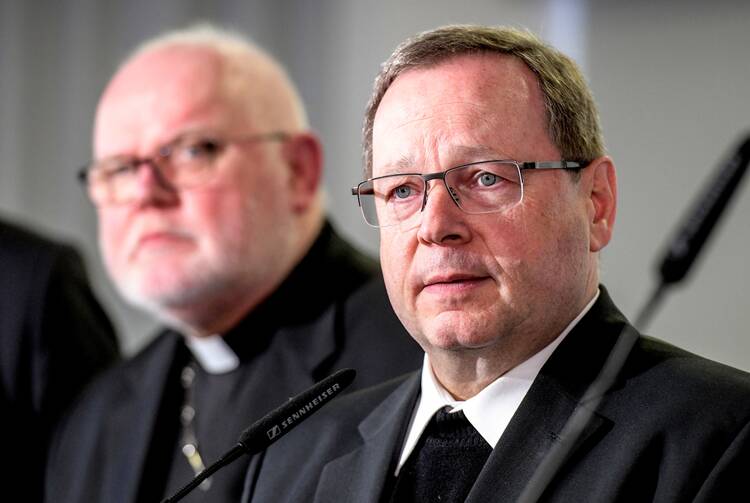 Limburg Bishop Georg Batzing speaks during a March 3, 2020, news conference in Mainz after being elected as the new president of the German bishops' conference. (CNS photo/Harald Oppitz, KNA)

More than 230 professors of Catholic theology in Germany and other countries where German is spoken have signed a statement protesting the Vatican’s recent pronouncement that priests cannot bless same-sex unions, adding to dissent over the document.

The document released a week ago by the Vatican’s orthodoxy office, the Congregation for the Doctrine of the Faith, said Catholic clergy cannot bless same-sex unions because God “cannot bless sin.”

The congregation’s note distinguished between blessing same-sex unions and the Catholic Church’s welcoming and blessing of gay people, which it upheld. The document argued that such unions are not part of God’s plan and that any sacramental recognition of them could be confused with marriage.

It pleased some Catholics and disheartened advocates for L.G.B.T. Catholics. The German church has been at the forefront of opening discussion on hot-button issues such as the church’s teaching on homosexuality.

The professors’ statement, which was drawn up by a working group at the University of Muenster in Germany, said the Vatican note lacked “theological depth” and “argumentative stringency.”

It included signatures from professors in Germany, Austria, Switzerland and the Netherlands.

The Catholic priest Bernd Moenkebuescher and his colleague in Wuerzburg, Burkhard Hose, are collecting signatures. By Monday, they had close to 2,000. Priests and parish officers, deacons and pastoral assistants said they would bless gay and lesbian couples if they so desired.

Father Moenkebuescher finds this hard to fathom. “It’s not as if a gay couple comes here every day. It’s rare and when it does happen, you can assume that it means something to those who ask for it and that they are doing so out of religious conviction,” he told regional public broadcaster WDR. “Of all people, they are now being slapped in the face and told: you are living something we don’t think is good. Worse still, this is being projected into the good God.”

Among the bishops, critical voices predominate. The president of the German Bishops’ Conference, Bishop Georg Baetzing, told KNA he was “not happy” that the Vatican was getting so massively involved in the debate on blessing same-sex couples at the present time. The bishop of Limburg said this gave the impression that Rome wanted to end a theological debate being conducted in many parts of the universal church as quickly as possible.

However, some of Baetzing’s fellow bishops backed the Vatican’s stance. Bishop Rudolf Voderholzer of Regensburg, who is himself a member of the Vatican Congregation for the Doctrine of the Faith, emphasized that while the dignity of every human being must be respected regardless of their sexual orientation, the church strictly rejected any equation of marriage and homosexual unions.

Bishop Stefan Oster of Passau said he hoped for “greater unity” because the debate on the blessing of homosexual couples was leading to polarization.

The Central Committee of German Catholics (ZdK) regards the Vatican declaration as one of many stop signs for the Synodal Path, a two-year effort launched in 2019 by the German bishops’ conference and the ZdK to discuss issues of power, sexual morality, priestly life and the role of women in the church. The blessing of homosexual people will remain a topic within the framework of the church reform dialogue, said ZdK President Thomas Sternberg.

The president of the German Bishops’ Conference, Bishop Georg Baetzing, told KNA he was “not happy” that the Vatican was getting so massively involved in the debate on blessing same-sex couples at the present time.

The question is how much room there is for compromise. Baetzing conceded that the C.D.F. had reflected the state of church teaching. For some time, he has wanted to travel to the Vatican for talks together with laypeople’s representatives. So far, the coronavirus crisis has thwarted that plan.

The list of issues is getting ever longer, but a look at the universal church shows that less importance is attached to the topic of same-sex unions in other parts of the world, where far more Catholics live than in Germany.

Moenkebuescher and Hose will keep on collecting signatures until Palm Sunday. They want to present the list to Baetzing and Birgit Mock, the two spokespeople of the forum “Sexuality and Partnership” of the Synodal Path. “I have blessed houses and sugar beet harvesting machines,” said university chaplain Hose. “Why not also people who love each other?”