Bishop Robert Barron cares about unity in the Catholic Church. Do his critics? 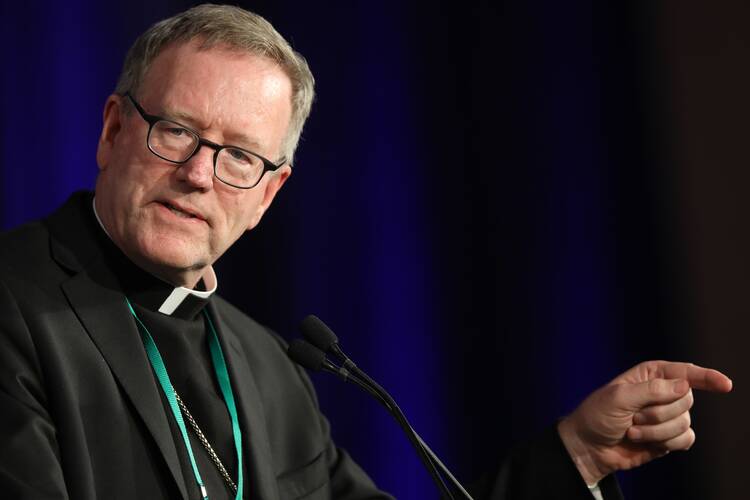 When everyone is mad at you, you must be doing something wrong. Or maybe something right.

Bishop Robert Barron has again made waves in the larger Catholic community, this time with his short statement “The Evangelical Path of Word on Fire.” As far as I know, the Los Angeles auxiliary bishop, theologian and longtime Catholic media presence said nothing new in the article, but one would not have guessed as much from the reaction.

In his article, Bishop Barron positions his Word on Fire ministry as a via media between two extremes: the “beige Catholicism” of anthropocentric cultural accommodation that he has long criticized and the more radical forms of traditionalism, which in the past few years he has begun to diagnose as trapped by its own anger and nostalgia.

Recent articles in National Catholic Reporter and Crisis criticize Bishop Barron for opposing reasons, but it is remarkable how similar their endpoints are: Bishop Barron makes great points about our enemies, but he just does not get us.

If Bishop Barron lands such serious criticisms of one’s opponents, could he perhaps not have something to say to one’s own tribe?

This is unfortunate for a few reasons. First, Bishop Barron is more sympathetic to both of these “sides” than these critics realize. In National Catholic Reporter, Rebecca Bratten Weiss notes that the bishop is favorably disposed to traditionalists in the church, a point Eric Sammons in Crisis seems to miss. The bishop is by no means criticizing all who embrace traditional forms of devotion within the church. And he has often praised those fighting for racial and social justice, as when he spoke to the Jesuitical podcast at America.In fact, in that interview, Bishop Barron answers Ms. Weiss’s question as to how he would “categorize boldly prophetic Catholics such as Dorothy Day.” He calls her a saint.

Second, one has to wonder: If Bishop Barron lands such serious criticisms of one’s opponents, could he perhaps not have something to say to one’s own tribe? Why should Bishop Barron be so prescient about those whom one has already rejected, but not those with whom one agrees?

Third, and most fundamental, neither author directly addresses Bishop Barron’s avowed task: cultivating Catholic unity. They both seem more committed to defending their tribe, as though there were nothing worthy in the notion of a middle way that could unite Catholics. The reader is left wondering: What is the path toward Catholic unity in our time? Is there one?

Are there risks in trying to occupy a middle ground? Yes, and Ms. Weiss and Mr. Sammons are well aware of them. Ms. Weiss criticizes “moderate Catholics” who refuse to face the church’s failings on racial justice. She seems to reject centrism as just another set of biases: a false pretension to objectivity. Mr. Sammons sees Bishop Barron as offering “half-measures” and “replacing felt-banner 1970s liturgies with slightly less gauche ones.”

The kind of cheap unity that papers over genuine problems and cynically seeks to be “relevant” is disingenuous and sure to fail.

Ms. Weiss and Mr. Sammons point to real concerns. The kind of cheap unity that papers over genuine problems and cynically seeks to be “relevant” is disingenuous and sure to fail. Indeed, such talk has given unity and reconciliation a bad name in recent months, as with calls for unity after the Capitol putsch.

What is at stake in this conversation is the possibility of unity in the church. The Catholic Church in the United States is scandalously divided. Working to remedy those divisions is not optional or the preserve of a select group.

Embracing such unity is risky in part because it destabilizes the culture-war dynamics to which so many of us are addicted. It opens oneself up to criticism. And it also requires us to see our “enemies” as interlocutors, even friends. This is what is at stake in the second and third points above. Perhaps in Catholic circles we should not be so quick to see the enemy of our enemy as our friend, nor the friend of our enemy as our enemy. One doesn’t need to read René Girard’s theory of the scapegoat mechanism to wonder if the culture war scripts need to be discarded.

The Catholic Church in the United States is scandalously divided. Working to remedy those divisions is not optional or the preserve of a select group.

Could Bishop Barron benefit from dialogue with these critics? Of course, and I hope he does. The topic of racial justice would be a perfect place to start. The Catholic Church is at least as divided on racial justice as the United States is generally. I would love to see Bishop Barron devote more of his time and energy to that burning issue. As he describes his own work: “I did not want simply to name a problem and speculate about a solution; I wanted, above all, to contribute concretely to that solution.” We need concrete solutions for racial reconciliation, too.

But criticisms of Bishop Barron that show no interest in concrete solutions to church divisions are missing his point and missing the urgent task of our time. That is the sort of engagement with Bishop Barron we need: an engagement that serves to foster ecclesial unity.

Seeking to occupy the via media is a tricky business. The risk is that the attempt will be taken primarily as an attack on people who are not on that middle road or that one will cultivate the hubris that comes with thinking one has all the answers.

But it is a risk we owe the church and world today.