Podcast: The Vatican statement on gay unions may have been rushed past the pope 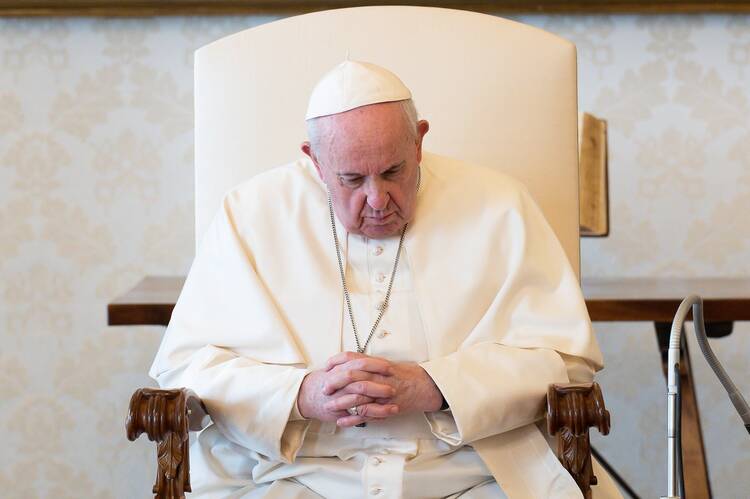 Pope Francis is pictured during his general audience in the library of the Apostolic Palace at the Vatican March 17, 2021. (CNS photo/Vatican Media)

This week, a statement from the Congregation for the Doctrine of the Faith made global headlines, saying that the church cannot bless gay unions and reiterating that they are “not ordered to the Creator’s plan.” The document said Pope Francis “assented” to its publication, which disappointed L.G.B.T. Catholics who had come to appreciate the pope’s more supportive tone.

But how closely did Pope Francis examine the document? This week on “Inside the Vatican,” America’s Rome correspondent Gerard O’Connell reveals that the document was drafted by a smaller group of people than would ordinarily be involved in writing this type of statement and that Pope Francis reviewed it just before his Iraq trip.

While it is unclear how much attention Pope Francis gave the document, Gerry says that it is significant that the document said the pope was “informed” and “assented to its publication,” a more hesitant phrasing than “approved” and “ordered its publication,” the terms the Vatican normally uses.

On this week’s show, Julia Erdlen, a Boston College graduate student in theology who identifies as queer, shares her reaction to the new document on blessing gay unions.

After that, Gerry and host Colleen Dulle discuss a recent guideline banning priests from celebrating Masses alone at the side altars in St. Peter’s Basilica and restricting celebrations of the Tridentine Latin Mass to one chapel in the basilica’s crypt. The two explain how these moves align with Pope Francis’ goal of implementing the reforms of the Second Vatican Council and explain why the pope has ordered an outside review of the Congregation for Divine Worship and the Discipline of the Sacraments.

Before naming Cardinal Sarah’s replacement, Pope Francis wants an outside review of the congregation for worship