Explainer: Your bishop said it’s time to come back to church. Is it a sin if you don’t go? 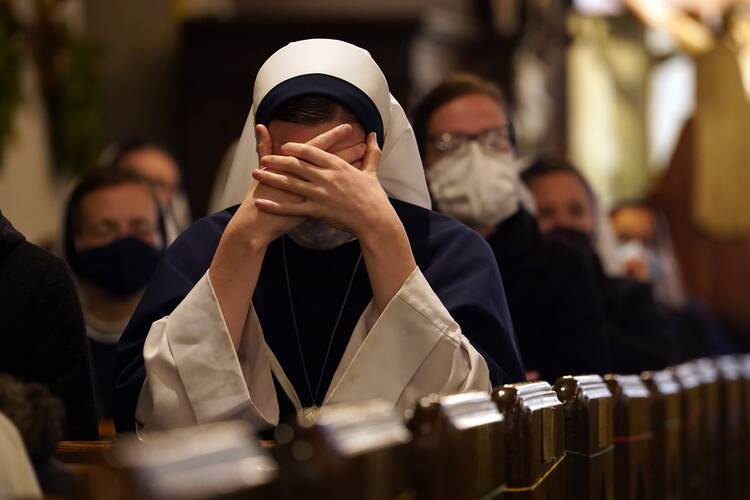 Following the onset of the coronavirus pandemic in March, nearly all Catholics in the United States were freed from the obligation to attend Mass on Sundays and Holy Days. But on Feb. 9, the Archdiocese of Detroit announced that it would lift its general dispensation beginning Mar. 13, 2021, becoming one of just a handful of dioceses to require Catholics to return to church.

In a statement, the archdiocese praised livestreamed Masses that have kept Catholics connected to the sacraments in many places during the pandemic, but added they “cannot become the norm. God did not come to us virtually.”

Whenever dioceses choose to lift dispensations, as with other difficult pandemic-related decisions, individual believers will have to decide for themselves when they feel safe going back to church.

That message was echoed by Bishop James Conley, who wrote this week that the dispensation from Mass would continue in the Diocese of Lincoln, Neb. But he urged Catholics to examine their other behaviors and consider if they should return to Mass, saying the dispensation “should not be abused.”

“I ask Catholics to look at their lives at this moment. Are you meeting with groups of people, perhaps attending sporting events and participating in other forms of entertainment, but not attending Mass? The Holy Eucharist is the source and summit of our faith, but are we making other things a priority in our lives at this time? Are we making this dispensation an excuse?” he wrote.

“The Holy Eucharist is the source and summit of our faith,” Bishop Conley wrote, “but are we making other things a priority in our lives at this time? Are we making this dispensation an excuse?”

As vaccinations become more widely available and as life is expected to return to some semblance of normalcy in the coming months, it is possible that many other dioceses will begin lifting dispensations. What does that mean for Catholics?

Why are Catholics obligated to attend Mass?

Canon law states, “On Sundays and other holy days of obligation, the faithful are obliged to participate in the Mass.”

Then there is the reason behind the rule.

The Catechism of the Catholic Church calls the Eucharist “the foundation and confirmation of all Christian practice.” As a result, “the faithful are obliged to participate in the Eucharist on days of obligation, unless excused for a serious reason (for example, illness, the care of infants) or dispensed by their own pastor. Those who deliberately fail in this obligation commit a grave sin.”

Are there times when it is not a grave sin to miss Mass?

Yes. When dioceses granted dispensations at the start of the pandemic, Catholics were no longer required to attend Mass, though they were still encouraged to mark Sundays with prayer and other spiritual practices.

Catholics are obligated to attend Mass, although there are circumstances when they should not.

Even in the Archdiocese of Detroit, where a dispensation expires in March, there are still several conditions in which a Catholic is permitted to miss Mass. The archdiocese listed eight conditions in which a Catholic may be permitted to miss Sunday Mass, including experiencing flu-like symptoms, being at-risk because of an underlying health condition and having “significant fear or anxiety of becoming ill by being at Mass.”

Is this the first time Catholics have been permitted not to attend Mass because of a public health crisis?

More recently, churches in Mexico City were closed in 2009 in an effort to slow the spread of H1N1, more commonly known as “swine flu.”

What about during normal times, without a pandemic?

Catholics are obligated to attend Mass, although there are circumstances when they should not. But beyond the three examples cited in official church teaching—lack of a priest, illness and caring for infants—the specifics regarding what qualifies as a serious reason for missing Mass are left to individual believers.

“It’s about using common sense,” said Adam Rasmussen, a lecturer in the theology and religious studies department at Georgetown University.

Wanting to make a Sunday morning tee time would not pass the test, but feeling like you have a cold that could be passed on to other people could. Inclement weather and lacking transportation are also sufficient reasons in many cases.

Mr. Rasmussen said he found it “prudent” for bishops to issue general dispensations at the start of the pandemic, especially because “there are some overly scrupulous people, or people who have a delicate conscience,” who, when they become genuinely sick, still feel obliged to attend Mass “because they just don't understand that they have a grave reason to miss Mass.”

Whenever dioceses choose to lift dispensations, as with other difficult pandemic-related decisions, he says individual believers will have to decide for themselves when they feel safe going back to church.

“People have to make their own decisions about what is the right moment to go to work, to school and to church,” he said. “Everyone has to decide that with their own conscience.”