Joe Biden quoted the Prayer of St. Francis last night. But did the beloved saint actually write it? 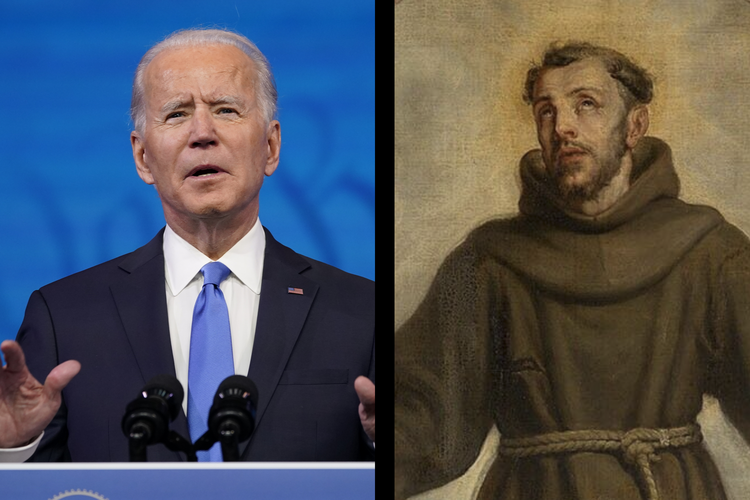 On Dec. 14, the Electoral College officially confirmed Joe Biden’s victory in the 2020 presidential election, following a month of attempts by President Trump and his administration to find evidence of voter fraud and corruption in the election results. President-elect Biden forcefully responded to the Trump administration’s actions and called for a different kind of approach to civic life in the United States going forward.

In his address, Mr. Biden’s Catholic faith was on full display as he quoted a prayer beloved by many Catholics: the prayer of St. Francis. He urged listeners to look to the future with the words of the saint in mind: “Where there is doubt, faith. Where there is darkness, light.”

Joe Biden’s Catholic faith was on full display as he quoted a prayer beloved by many Catholics: “Where there is doubt, faith. Where there is darkness, light.”

Although Mr. Biden’s sentiment likely resonated with many Catholics and non-Catholics alike, it is entirely possible that the prayer, widely attributed to St. Francis of Assisi, actually bears no connection to the benevolent 13th-century friar.

A periodical called La Clochette first published the prayer in French in 1912, but it was published anonymously. Its original French title is translated as “A Beautiful Prayer to Say During the Mass.” It is possible that it was written by Father Esther Boquerel, a French priest and the founder of the Holy Mass League, which published the periodical.

A few years later, the prayer was passed along to Pope Benedict XV, who saw its potential as a call for peace in the midst of World War I. In 1916, its translation into Italian and publication in the Vatican’s daily newspaper shot the prayer to much greater prominence. At the time, it was incorrectly thought by some to be inspired by William the Conqueror.

The earliest known instance of the prayer being linked with St. Francis was in 1920, and even then, he was not explicitly credited as its author. A French Franciscan printed the text on the back of an image of Francis, but the prayer was simply titled “Prière pour la paix,” or “Prayer for peace.” The first direct attribution to St. Francis, from a French Protestant movement, did not appear for seven more years.

According to Christian Renoux’s writing on the prayer’s origins and dissemination, its eventual translation into English and its appearance in the works of Cardinal Francis Spellman advanced its popularity all over the world and in a variety of faith traditions.

To this day, the Franciscans do not consider the prayer an official prayer or work of St. Francis.

The prayer attributed to St. Francis has continued to gain widespread popularity through several musical settings. Mass-goers will likely be familiar with the melody by the South African liturgical composer Sebastian Temple. Even non-Catholics may recognize the tune from its appearance in the Oscar-nominated film “Lady Bird” or from its performance at the funeral of Princess Diana. (The princess was reported to have considered it a favorite song.) The Canadian singer Sarah McLachlan also wrote and popularized her own setting of the prayer.

St. Teresa of Calcutta also publicly referenced St. Francis’ prayer when she accepted the Nobel Peace Prize in 1979. The nun and missionary contributed to public imagination about Francis’ authorship of the words saying, “I always wonder that 400 to 500 years ago as St. Francis of Assisi composed this prayer, that they had the same difficulties that we have today.”

Whether or not St. Francis of Assisi himself penned this prayer for peace, the text reflects the simple and intentional spirituality for which he is well-known. Not only that—since its popularization, the message has inspired people of all walks of life with its petition for peace that is both timeless and universal. Mr. Biden’s words call to mind his own faith background but also hold resonance for Americans of all faiths and cultures, who know quite well that a better world can be ours if we heed the prayer’s direction: “Where there is doubt, faith. Where there is darkness, light.”