Why is Darth Vader in the Vatican’s Nativity scene? 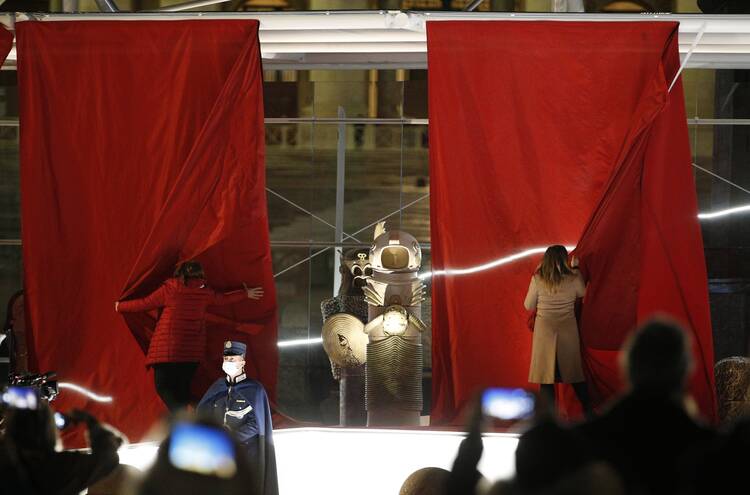 The Nativity scene is unveiled in St. Peter’s Square during a Christmas tree lighting ceremony at the Vatican Dec. 11, 2020. (CNS photo/Paul Haring)

The Vatican unveiled its official Nativity scene in St. Peter’s Square on Friday evening, surprising some with its depiction of an astronaut and another figure wearing a Darth Vader-esque helmet coming to adore the Christ child.

The Nativity set was made between 1965 and 1975 as part of a 54-statue collection created by students and teachers of the “F.A. Grue” Art Institute in Castelli, a town in Italy’s Abbruzo region that was known for its ceramics as early as the eighth century B.C. According to a Vatican press release, the Nativity scene is an ode both to contemporary art and to Abruzzo’s cultural history. Since 2012, the scene has highlighted artists and materials from a different part of Italy: Recent years have included a terracotta Nativity and one made of sand.

Contemporary cultural figures like this year’s astronaut have often been included in the Vatican’s Nativity scenes, which have been displayed in St. Peter’s Square each year since 1982. This is not the first time one has raised eyebrows: In 2017, the set included a nude male figure meant to represent clothing the naked, a work of mercy. Because of the terracotta figure’s sculpted muscles and glazed finish, some compared it to a “Ken doll.”

According to a Vatican press release, the Nativity scene is an ode both to contemporary art and to Abruzzo’s cultural history.

Art historian Elizabeth Lev has lived in Rome for more than 20 years. She said that there is a tradition in Italy of rushing to see a new work of art and giving an opinion on it, as happened on Twitter yesterday. For her part, Ms. Lev tweeted a photo of the astronaut and “Darth Vader” character with the caption, “So the Vatican presepe has been unveiled....turns out 2020 could get worse…” “Presepe” is the Italian term for a Nativity scene; it comes from the Latin word for manger.

So the Vatican presepe has been unveiled....turns out 2020 could get worse... pic.twitter.com/xI2NMNn81r

Ms. Lev was not able to identify whether the astronaut and “Darth Vader” character were meant to represent the shepherds or two of the Three Kings. “We’re all sitting here together asking which one is which,” she said in an interview with America.

For Ms. Lev, the central motivation behind the Vatican’s Nativity scene is communicating that Christ came for all people. This is the logic behind highlighting diverse artists and materials and is the message of the architecture of St. Peter’s Square, where the Nativity is displayed: The plaza is flanked by Bernini’s famous colonnade, which evokes open arms embracing the square. Ms. Lev said the artists’ goal in creating the space-inspired figures could have been to communicate the idea of evangelizing any beings beyond this planet, an idea that would have been popular amid the excitement of the space race and moon landing.

For Elizabeth Lev, the central motivation behind the Vatican’s Nativity scene is communicating that Christ came for all people.

Pope Francis wrote in a letter on Nativity scenes last year that the birth of Christ’s “portrayal in the creche helps us to imagine the scene. It touches our hearts and makes us enter into salvation history as contemporaries of an event that is living and real in a broad gamut of historical and cultural contexts.”

He continues: “Children—but adults too!—often love to add to the nativity scene other figures that have no apparent connection with the Gospel accounts. Yet, each in its own way, these fanciful additions show that in the new world inaugurated by Jesus there is room for whatever is truly human and for all God’s creatures.”

But, Ms. Lev said, this year’s scene threatens to obscure that fundamental purpose of uniting people by provoking arguments about the display. “It is not, perhaps, the best decision to get people up in arms after what has been a very challenging year,” Ms. Lev said. “The point of Christmas, of the Prince of Peace, is to unite everyone, and I’m afraid the result [of this display] has been more division than uniting.”

She is also concerned that, in a time when the church has struggled to evangelize (13 percent of U.S. adults identify as “former Catholics”), putting up a Nativity set that invites mockery is working against that goal of evangelization.

“The Catholic Church has an incredible tradition of beauty, and yet, after a year of difficulty, we’ve put up something that makes people mock Jesus.”

“The problem is, there is a universal outpouring of mockery. They’re making fun of the Holy Family; people are vying with each other to come up with the funnier name,” Ms. Lev said, admitting that she has also made jokes about the scene. “The Catholic Church has an incredible tradition of beauty, and yet, after a year of difficulty, we’ve put up something that makes people mock Jesus.”

Not everyone disliked the display: One Twitter user said the pale-hued figures were “beautiful” and “almost medieval.” Tommy Tighe, author of The Catholic Hipster Handbook, reveled in the “weirdness” of the scene, tweeting, “you can’t be like ‘one reason catholicism rules is because it’s weird’ and then not love the vatican nativity scene ESPECIALLY THE ASTRONAUT.” He joked that he would be hanging images of Jesus and Mary in spacesuits around his house.

you can’t be like “one reason catholicism rules is because it’s weird” and then not love the vatican nativity scene ESPECIALLY THE ASTRONAUT pic.twitter.com/lTOVx0MvZX

Ms. Lev said she would have preferred to see the Vatican display a Nativity set with a more traditional aesthetic, that was less removed from the usual realistic figures and thus less open to different interpretations. She thinks that in a year when people feel cut off from the church and sacraments, it was especially important to return to the scene’s medieval roots. Medieval accounts detail how, at the first recreation of the Nativity scene, organized by St. Francis of Assisi, someone was so moved that they had a mystical vision of the Christ child lying in the manger.

With this year’s less representative, more distanced, cylindrical figures in St. Peter’s Square, “we’ve distanced ourselves from the seeing of the Christ child,” she said. “After a year of closed churches, I don’t think that ‘toilet paper Jesus’ is going to cut it.”

The Vatican’s nativity set will remain on display in St. Peter’s Square until the Feast of the Baptism of the Lord on Jan. 10, 2021.