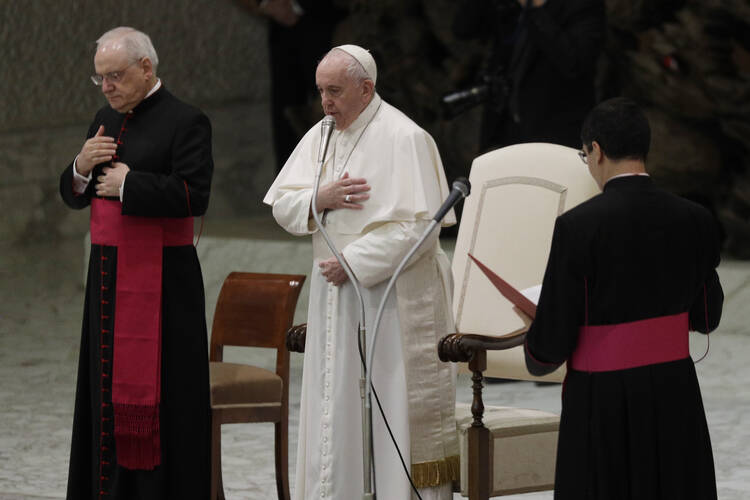 Pope Francis, center, makes the sign of the cross during his weekly general audience in the Paul VI hall at the Vatican, Wednesday, Oct. 21, 2020. (AP Photo/Gregorio Borgia)

ROME (AP) — The Vatican says Pope Francis' comments on gay civil unions were taken out of context in a documentary that spliced together parts of an old interview, but still confirmed Francis' belief that gay couples should enjoy legal protections.

The Vatican secretariat of state issued guidance to ambassadors to explain the uproar that Francis' comments created following the Oct. 21 premiere of the film "Francesco," at the Rome Film Festival. The Vatican nuncio to Mexico, Archbishop Franco Coppola, posted the unsigned guidance on his Facebook page Sunday.

In it, the Vatican confirmed that Francis was referring to his position in 2010 when he was archbishop of Buenos Aires and strongly opposed moves to allow same-sex marriage. Instead, he favored extending legal protections to gay couples under what is understood in Argentina as a civil union law.

The Vatican says Pope Francis’ comments on gay civil unions were taken out of context in a documentary that spliced together parts of an old interview.

While Francis was known to have taken that position privately, he had never articulated his support while as pope. As a result, the comments made headlines, primarily because the Vatican's doctrine office in 2003 issued a document prohibiting such endorsement. The document, signed by Francis' predecessor as pope, says the church's support for gay people "cannot lead in any way to approval of homosexual behavior or to legal recognition of homosexual unions."

The recent uproar gained even more attention because it turned out director Evgeny Afineevsky misled journalists by claiming Francis had made the comments to him in a new interview. A week before the premiere, when he was asked about the civil union comments, Afineevsky told The Associated Press that he had two on-camera interviews with the pope. In comments to journalists after the premiere, he claimed that the civil union footage came from an interview with the pope with a translator present.

It turned out, Francis' comments were taken from a May 2019 interview with Mexican broadcaster Televisa that were never broadcast. The Vatican hasn't confirmed or denied reports by sources in Mexico that the Vatican cut the quote from the footage it provided to Televisa after the interview, which was filmed with Vatican cameras.

Afineevsky apparently was given access to the original, uncut footage in the Vatican archives.

The guidance issued by the secretariat of state doesn't address the issue of the cut quote or the fact that it came from the Televisa interview. It says only that it was from a 2019 interview and that the comments used in the documentary spliced together parts of two different responses in a way that removed crucial context.

The guidance issued by the secretariat of state doesn't address the issue of the cut quote or the fact that it came from the Televisa interview.

"More than a year ago, during an interview, Pope Francis answered two different questions at two different times that, in the aforementioned documentary, were edited and published as a single answer without proper contextualization, which has led to confusion," said the guidance posted by Coppola.

In the film, Afineevsky recounts the story of Andrea Rubera, a married gay Catholic who wrote Francis asking for his advice about bringing into the church his three young children with his husband.

[Podcast: Everything you need to know about Pope Francis’ comments on same-sex civil unions]

It was an anguished question, given that the Catholic Church teaches that gay people must be treated with dignity and respect but that homosexual acts are "intrinsically disordered." The church also holds that marriage is an indissoluble union between man and woman, and as a result, gay marriage is unacceptable.

In the end, Rubera recounts how Francis urged him to approach his parish transparently and bring the children up in the faith, which he did. After the anecdote ends, the film cuts to Francis' comments from the Televisa interview.

"Homosexual people have the right to be in a family. They are children of God," Francis said. "You can't kick someone out of a family, nor make their life miserable for this. What we have to have is a civil union law; that way they are legally covered."

Francis' comments about gays having the right to be in a family referred to parents with gay children, and the need for them to not kick their children out or discriminate against them, the Vatican guidance said.

The pope's comments about gay civil unions came from a different part of the Televisa interview and included several caveats that were not included in the film.

In the Televisa interview, Francis made clear he was explaining his position about the unique case in Buenos Aires 10 years ago, as opposed to Rubera's situation or gay marriage as a whole.

Pope Francis is known to hunker down in silence when controversy mounts.

In the Televisa interview, Francis also insisted that he always maintained Catholic doctrine and said there was an "incongruenza" for the Catholic Church as far as "homosexual marriage" is concerned.

The documentary eliminated that context.

The Televisa footage is available online, and includes an awkward cut right after Francis spoke about the "incongruity" of homosexual marriage. Presumably, that is where he segued into his position as archbishop in favoring extending legal protections to gay couples.

Neither the Vatican nor Afineevsky have responded to repeated questions about the cut quote or its origin. Francis is known to hunker down in silence when controversy mounts.