Where homosexuality is still illegal, Pope Francis has thrown a lifeline to L.G.B.T. Catholics 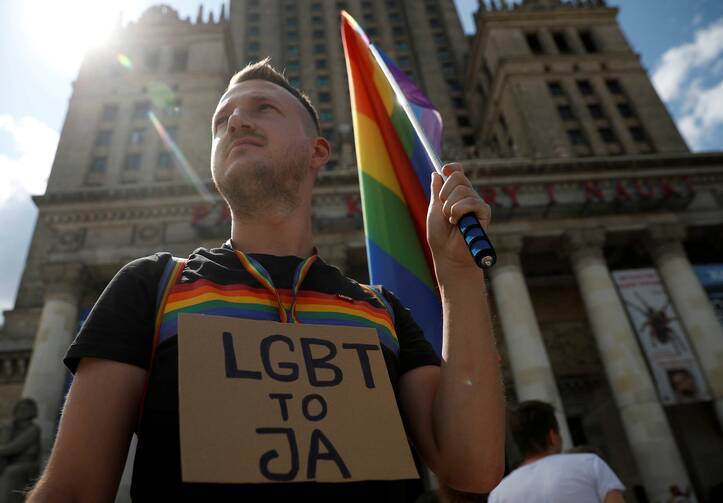 Pawel Szamburski, 29, participates in a July 27, 2019, protest in Warsaw, Poland, against violence that took place against the LGBTQ community during the first pride march in Bialystok earlier this month. (CNS photo/Kacper Pempel, Reuters)

Janine Scott-dos Santos said she hesitated and prayed about the possibility of legalizing her relationship with her long-time partner. South Africa, where Ms. Scott-dos Santos lives with her partner and their 8-year-old son, legalized same-sex marriage in 2006. But it is only more recently that public attitudes have begun to shift there in terms of the acceptance of L.G.B.T. people.

Ms. Scott-dos Santos said her eventual decision to commit to her partner was “exactly for what the pope is saying, to have our legal rights as a family protected.” Ms. Scott-dos Santos was referencing clips revealed this week in a new documentary that show Pope Francis urging families to accept their L.G.B.T. members and endorsing the idea of civil protections for same-sex couples—though the pope was careful not to endorse same-sex marriage. She said she is hopeful the pope’s words will encourage other people in her situation to take steps to ensure their families are protected under civil law, but she is unsure how much of an impact the pope’s words will have on shifting attitudes.

“I’m not naïve enough to believe that because the pope has said this, that it’s going to change the minds of Catholics,” she said. “But I do think that this is a step in the right direction.”

In some ways, Ms. Scott-dos Santos is lucky. She lives in a place where civil protections already exist for L.G.B.T. people and where attitudes are quickly shifting toward acceptance. But many Catholics live in places where homosexuality is considered taboo or is even illegal. Some of those places are nations in Africa, where colonial-era laws banning same-sex relations remain on the books. Christianity’s center of gravity is shifting to Africa, and its importance for the Catholic Church has been underscored by the four visits Pope Francis has made to the continent since his election in 2013.

The Rev. Bryan Massingale, a theologian at Fordham University, described the pope’s comments as “huge for a global church where homosexuality is still outlawed in over 70 countries and punishable by death in five.”

Father Massingale described the pope’s comments as “huge for a global church where homosexuality is still outlawed in over 70 countries and punishable by death in five.”

“It definitely will save lives, especially in countries where there is active persecution of L.G.B.T.Q. people,” added Father Massingale, who regularly speaks publicly in support of L.G.B.T. Catholics. He said the pope’s recently publicized comments were consistent with his pastoral approach, by “putting the focus on gay and lesbian persons, not seeing them as ‘walking sex acts.’”

For L.G.B.T. Catholics living in places where homosexuality is outlawed, hearing Pope Francis stand up for the rights of L.G.B.T. people in a new documentary is something of a Godsend.

Poland is one of the most Catholic nations in the world. About half the population in says homosexuality should not be accepted by society, according to the Pew Research Center. Some Catholic leaders there have been vocal against L.G.B.T. civil rights. In 2019, for example, Archbishop Marek Jedraszewski of Krakow used the 75th anniversary of Poland’s uprising against the Nazis to condemn gay activists.

“The red pestilence no longer marches across our land, but a new, neo-Marxist one has appeared, which seeks to conquer spirits, hearts and minds—not red, but rainbow,” he said.

Given the tone of the country’s bishops, the Polish L.G.B.T. activist Grzegorz Okrent is unsure how much of an impact the pope’s words on respecting gay civil rights will have in Poland.

According to Reuters, the Polish bishops’ conference said in a statement that the pope’s words need additional context and noted they are his opinion and not part of church teaching.

L.G.B.T. Catholics in sub-saharan Africa, home to a large and growing population of Catholics, say the pope’s words could help when it comes to societal acceptance.

L.G.B.T. Catholics in sub-saharan Africa, home to a large and growing population of Catholics, say the pope’s words could help when it comes to societal acceptance.

“I have faced a lot of challenges, a lot of discrimination, a lot of difficulties in the church,” said Brian Okollan, a 40-year-old Catholic who lives in Kenya, where the high court upheld colonial-era anti-sodomy laws in 2019. About 70 percent of Kenya’s population is Christian, with Catholics comprising about 30 percent of the total population.

Mr. Okollan, the head of Rainbow Catholics Kenya and a former board member of the Global Network of Rainbow Catholics, told America that L.G.B.T. people rank among “the most discriminated communities in the church” and that he has experienced “torment” at the hands of church leaders. And while he welcomes the pope’s words, he wonders if bishops and other church leaders in Kenya will be receptive to the softer tone on L.G.B.T. issues preached by the pope. A report from the Pew Research Center found that just 14 percent of Kenyans believe homosexuality should be accepted by society, though that number is up from 1 percent in 2002.

“And how has [the pope], as the leader of the international Catholic Church, prepared the ground for all these messages?” Mr. Okollan asked. “Because the message is good, but if a message falls on infertile ground, nothing will grow.”

In neighboring Uganda, some L.G.B.T. Catholics say they hope the pope’s words resonate with families and church leaders, but they are unsure what difference they will make. Last year, a government minister in Uganda, Simon Lokodo, urged lawmakers to consider reviving a proposal from 2013 that would have instituted the death penalty for those convicted of engaging in homosexual acts. The proposal by Mr. Lokodo, a former Catholic priest, did not gain traction. Catholics are the largest religious group in Uganda, making up about 39 percent of the population. A spokesman for Uganda’s bishops’ conference said church leaders there were confused by the pope’s remarks and sought clarification from the Vatican.

Many church leaders in Uganda argue that homosexuality is not an African reality and that it goes “against their cultures and preachings.”

A 22-year-old gay man who lives in Uganda told America in an email that he hoped the pope’s comments would “help in decreasing a lot of stigma from churches and religious leaders that think the L.G.B.T.Q. persons are ungodly.”

Another L.G.B.T. Catholic who lives in Uganda, Ssenfuka Joanita Warry, called the pope’s message a “bombshell.” Ms. Warry, who leads Faithful Catholic Souls Uganda, a group of L.G.B.T. Catholics, said a focus on acceptance was more important than debates about changing the church’s teaching on same-sex relationships. The pope’s comments urging people to accept their L.G.B.T. family members, she said, especially struck a chord.

“Remember, the most important issue there is love,” she said. “They hold the blood of that family, so they belong. And it doesn’t make sense to exclude them because God said love everyone. If you think they are sinners, it’s not your duty to judge the sinners.”

Ms. Warry said that, while Ugandan bishops and priests generally defend what the pope says, they will also argue against him when it comes to L.G.B.T. issues. Many church leaders in Uganda argue that homosexuality is not an African reality and that it goes “against their cultures and preachings,” she said. “There will always be the hypocritical pendulum moving side to side with excuses.”

But Ms. Warry said that the pope’s message this week flies in the face of such hypocrisy. While she is adopting a wait-and-see approach when it comes to local reaction among bishops, Ms. Warry said the pope’s words have already made an impact on her.

“He is saying that it is our culture—as Catholics or as Christians—to do exactly what he said: acceptance and inclusion of everyone, regardless of their sexual orientation and gender identity,” she said. “I think he’s given me a reason for not changing my religion or going to any other church. It gives me courage.”