Analysis: What is going on at the Vatican’s communications department? 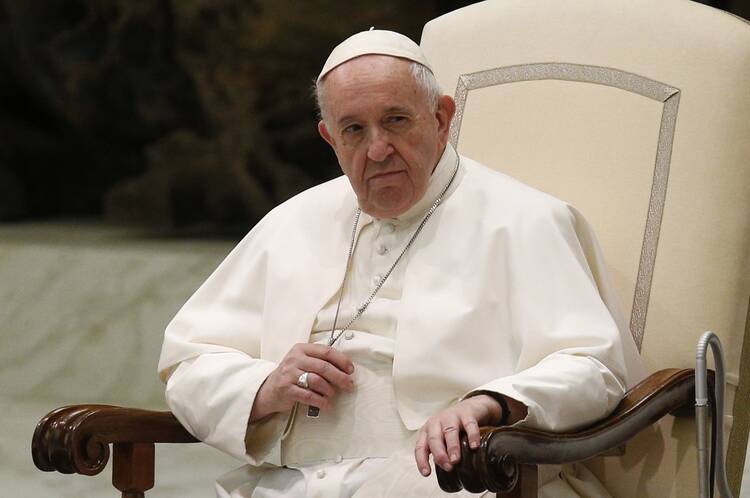 How does the Vatican’s Dicastery for Communication work? That is what many are wondering following the lack of response by the Vatican to questions raised regarding what Pope Francis actually said about the need for a law for civil unions this week. The confusion began after the release of the documentary-film “Francesco.” Directed by Evgeny Afineevsky, it premiered at the Rome Film Festival on Oct. 21. The Vatican did not exercise any editorial control over Mr. Afineevsky’s documentary.

After the film’s screening, the Russian director was questioned by reporters as to the background of the pope’s remarks (since the questions to which he responded are not included in the documentary). He told journalists that those remarks were the result of an on-camera interview he made, but he did not provide any contextual information and professed great surprise and regret that the comments had created a firestorm. He has offered no further clarification.

The Vatican, for its part, has not responded to numerous questions from journalists regarding the origins of the pope’s remarks, nor has it offered clarification on them, not even when some cardinals and bishops have criticized the pope without having verified carefully what actually happened. My years of experience covering the Vatican leads me to conclude that the press office has remained silent only because it knows that this is what the pope wants.

My years of experience covering the Vatican leads me to conclude that the press office has remained silent only because it knows that this is what the pope wants.

Francis too has remained silent, as he has done on a few previous occasions when there was much controversy. It remains unclear if the Vatican will issue any statement on this whole affair. But the pope could surprise us when he speaks at the Angelus tomorrow.

Mr. Afineevsky has told me he came to Rome in March 2018 with the intention of making a documentary on Pope Francis whom he considers a world “leader” and “a pro-life person on the global stage.” He said he wanted to discuss his project with the pope but only succeeded in doing so after many persistent attempts in November 2018. Since then, he said he has met Francis four or five times, but America has learned from informed sources that he never succeeded in getting the on-camera interview he so desired.

America has learned from informed sources that Mr. Afineevsky never succeeded in getting the on-camera interview with Pope Francis he so desired.

Instead, he was given access to the Vatican television archives and there he found the unedited footage of a long television interview with Pope Francis made by Valentina Alazraki, a reporter for Mexico’s Televisa, in May 2019. As is normal, a Vatican television unit filmed that interview and, in accordance with a pre-interview agreement, officials subsequently edited it and some days later gave the edited version to Televisa, which broadcast it. America has learned that on this occasion as on other similar occasions, and as a matter of general principle, the Vatican did not edit or remove any part of what Francis said in the interview without his prior agreement.

Mr. Afineevsky, using the unedited version of the interview, took partial quotes from the pope’s answers to two different questions. He reassembled these partial quotes into this statement: “Homosexual people have the right to be in a family. They are children of God and have a right to a family. Nobody should be thrown out or be made miserable over it. What we have to have is a civil union law—that way they are legally covered. I supported that.”

But as the original unedited text shows, the first three short sentences of that statement in the documentary are only a small part of Francis’ long response to one question (also found in the edited version of the Televisa interview) about the integration into the church of people living in “irregular situations.” He recalled that he was once asked in a press conference on the plane “about the integration into a family of persons with a homosexual orientation, and I said, homosexual persons have a right to remain in the family, persons with a homosexual orientation have a right to remain in the family and the parents have the right to recognize this son as a homosexual, and this daughter as homosexual. Nobody should be thrown out of the family, and no one’s life should be made impossible because of this.”

The last sentence of the statement in the documentary is the final part of his original response to a totally different question that can be found only in the unedited version of the Televisa interview. Ms. Alazraki had recalled the pope’s battle against same sex-marriages when he was archbishop of Buenos Aires and asked whether his seemingly more liberal position as pope is due to the Holy Spirit.

His full answer in Spanish (translation mine) was: “The grace of the Holy Spirit certainly exists. I have always defended the doctrine. And it is curious that in the law on homosexual marriage…. It is an incongruity to speak of homosexual marriage. But what we have to have is a law of civil union (ley de convivencia civil), so they have the right to be legally covered.”

Having some understanding of the complex Vatican communication system could help understand a bit about its processes. In June 2015, Pope Francis decreed the reform of the entire Vatican system of communication with the aim of achieving “a unified integration and management” of the various entities involved with communication at that time, “so that the entire system may respond effectively to the needs of the Church’s mission of evangelization.”

The new Dicastery for Communication, which oversees the pope’s messages from the Holy See, was established through that organizational reform. [Editor’s note: America’s editor at large, James Martin, S.J., serves as an advisor to the dicastery.] It is the largest department of the Roman Curia and employs a total of some 530 employees of many different nationalities. It responds directly to the pope but also serves the Secretariat of State, which communicates directives and press communiques to be published by the press office.

The dicastery has a broad mandate; its work is complex and diversified. The press office’s work is even more complex given that it normally operates in day-time hours (Rome local time) but must also contend with a 24/7 global news cycle. It has a staff that includes five journalists that serves some 300 accredited journalists from the world’s main news outlets, publishes daily news bulletins and hosts press conferences.

The press office’s situation is even more complex because Pope Francis is a star communicator in his own right, who works not only through the dicastery but also independently of it. St. John Paul II met journalists, gave press conferences and some interviews but nothing on the scale of Pope Francis. He not only joins video conferences and press conferences without knowing the questions in advance, but also accepts interviews on camera and off-camera as well as book-length interviews, arranged through the dicastery, and does the same with other journalists independently of the dicastery, which often only learns about such interviews after the fact.

Pope Francis speaks freely, sometimes to the dismay of some cardinals, bishops and Vatican officials who would prefer him to use a carefully prepared script and that the Holy See retain total editorial control and copyright over what he says. Francis, however, prefers his freedom of speech and spontaneity, even at the risk of misspeaking sometimes or being misinterpreted. Not infrequently, he upsets those whom he calls “the doctors of the law.”

Pope Francis speaks freely, sometimes to the dismay of some cardinals, bishops and Vatican officials who would prefer him to use a carefully prepared script.

In Dec. 2013, the former director of the Holy See press office, Greg Burke, was widely credited with being a P.R. genius because of the Vatican communications’ success at that time, but he flatly denied this in an interview with me for the BBC. “Give me a break,” he said, “It’s him! It’s him!” referring to Pope Francis. “He’s the one who’s done all this.”

Then he confided: “Yes, we have a strategy: kick the ball to Francis and he scores the goals! He’s better than Maradona and Messi combined.”

Nowadays, Paolo Ruffini, the current prefect of the dicastery says much the same when he tells people, “the best spokesperson of the pope is the pope himself.”

[Read this next: What Pope Francis actually said about civil unions—and why it matters]