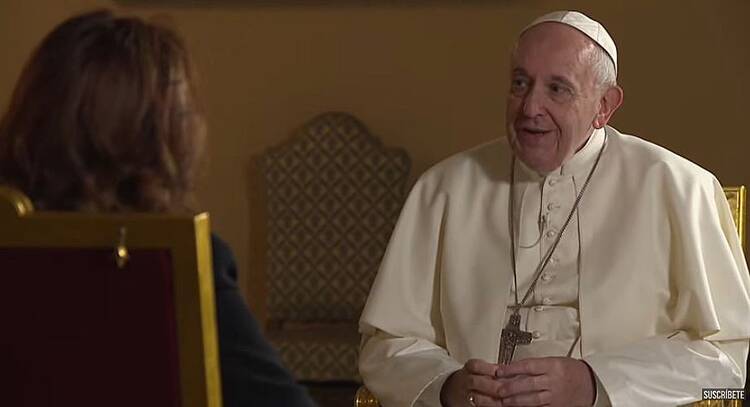 Pope Francis speaks with Valentina Alazraki of the Mexican television station Televisa during an interview that aired in May 2019. (CNS screenshot/Noticieros Televisa via YouTube)

Last week, a new documentary on Pope Francis, “Francesco,” debuted in Rome. The filmmaker Evgeny Afineevsky features interviews from the pope and others close to him on controversial topics. The news coverage, of course, focused on Pope Francis’ comments on same-sex unions.

Sadly, few commentators seemed to truly encounter the pastoral nature and aims of Francis, who first and foremost is drawn to respond to those who are wounded—spiritually, emotionally, physically or mentally. In fact, in the interview from which the pope’s footage looks to have been taken, he confirms his basic pastoral nature, telling the interviewer that his role as pope or bishop could be taken from him but “not my priesthood.”

Since the premiere of the film on Oct. 21, we have learned that the pope’s comments about same-sex civil unions were made during a 2019 interview with Vatican journalist Valentina Alazraki but were not aired at the time. The Vatican gave Mr. Afineevsky access to the unedited footage of that interview, tape that he included in the documentary. (The video and an English translation can be found here. The official Vatican transcript in Spanish can be found here.)

Few commentators seemed to truly encounter the pastoral nature and aims of Francis, who first and foremost is drawn to respond to those who are wounded.

The official Spanish transcript on the Vatican News website has an ellipses in the passage in question, suggesting a gap in the interview. Ms. Alazraki asks Francis if he has changed his position on marriage equality since he became pope. He responds, “I have always defended the teaching [on marriage]. And it is odd, in the law [regarding] same-sex marriage.........[sic] [It] is an incongruency to speak of same-sex marriage.” That could be the point where he made the statement about domestic partnerships or same-sex unions.

The documentary transcript currently translates as: “Homosexual people have a right to be in a family. They are children of God and have a right to a family. Nobody should be kicked out of the family or be made miserable for this [homosexuality]. We have to create a civil union law (ley de convivencias). They have a right to legal protection.”

Interestingly, his comments from the interview are in the context of his frustration with being taken out of context by the media and others. In all fairness, I think that the pope does not make the situation any less complicated, insofar as he has made unclear statements in the past.

Nevertheless, we must listen to and encounter Francis. Throughout his papacy, he has clearly demonstrated his love for the vulnerable (including the unborn), the wounded and the marginalized. His comments about the need for families to embrace their homosexual members reminded me of another theme of his: throwaway culture. It applies to environmental threats, but he was explicit that it also refers to how we treat others and how we reject some of the most fundamental human relationships. Many families with homosexual members struggle with how to accept them. In some cases, the encounter never happens, and families discard their own.

To better understand the conversation, I challenge the notion that “civil union” has an unequivocal meaning. In many countries, this is a precise legal term that was used politically to advance same-sex marriage. Same-sex marriage is now codified in most Western nations. Francis has repeatedly articulated his defense of the church’s teaching on marriage. Therefore, when he appears to speak of rights for people in same-sex unions, I surmise that he is talking about basic rights that could be extended to others regardless of the nature of their personal relationship. It would be more consistent with the term “domestic partnership.”

In fact, Francis’ close friend from Argentina, Archbishop Victor Manuel Fernandez of La Plata made this clarification in a Facebook post on Wednesday. He restated that Pope Francis defends the Catholic Church’s understanding of marriage. He noted, “However, Bergoglio always recognized that, without calling it ‘marriage,’ there are in fact, very close unions between people of the same sex, which do not in themselves imply sexual relations, but a very intense and stable alliance.”

Cardinal William Levada served as the archbishop of San Francisco for 10 years before going to Rome to serve as prefect of the Congregation for the Doctrine of the Faith in 2005. He was known as a strong defender of marriage. When the City of San Francisco expanded domestic partnership benefits to same-sex couples, then-Archbishop Levada responded with his own expansion of the policy: Archdiocesan employees could select any person they lived with as their “domestic partner.” In other words, the term was no longer restricted to those who have a sexual or romantic relationship. Two unmarried relatives could avail themselves of the benefits or two friends.

We can love without condoning, and we can communicate difficult teachings without wounding.

The church has indicated no formal objection to a broadly defined law recognizing domestic partners. And, given the demographics in the developed countries—smaller families, fewer marriages, more non-traditional families, more single people—there might be a lot of wisdom in advancing that conversation. I certainly gave the idea of establishing a domestic partnership consideration when I was single.

I have never seen a successful outreach to L.G.B.T. persons and others who are same-sex oriented that used the culture war approach. This approach tends to focus on condemning rather than encountering. It creates targets rather than working toward understanding and conversion.

If we are truly concerned about the economy of salvation, saving souls, we have to begin with the encounter. Francis is very clear on this both in his teaching and in his witness. In fact, he may make many of us uncomfortable regardless of the lens through which we see the church because he is a constant reminder that we may not understand everything. We may have to pause, pray, listen and encounter more. When we do move beyond ourselves, we may discover more clearly our own need for conversion.

Moving beyond ourselves takes us back to the Gospel. It is not a get out of jail free card. It is not moral relativism. We can love without condoning, and we can communicate difficult teachings without wounding. 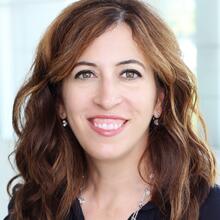 Pia de Solenni, SThD, is a moral theologian. She serves as the president and executive director of the Global Institute of Church Management. She can be followed on Facebook, Twitter and Instagram.

@PiadeSolenni
Show Comments ()
Join the conversation: Login or create an account
Before you can comment, you need to update your profile to include your first and last name, as required in our comments policy. Then reload this page and you'll be set up for commenting. Update your profile