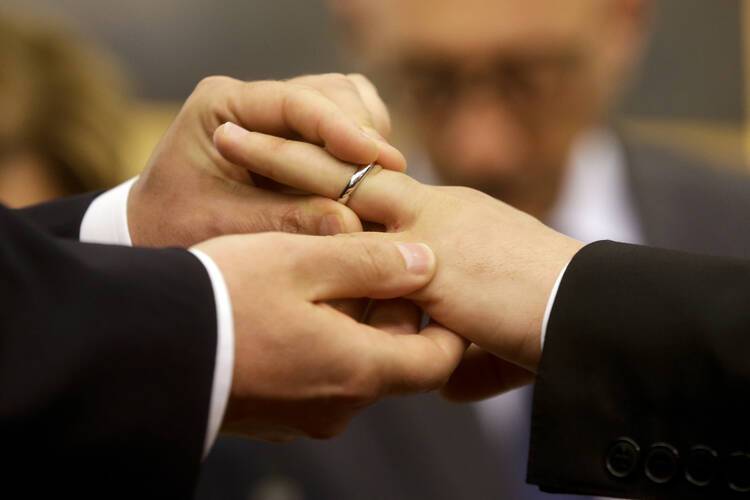 In this May 21, 2015 file photo, Mauro Cioffari, left, puts a wedding ring on his partner Davide Conti's finger as their civil union is being registered by a municipality officer during a ceremony in Rome's Campidoglio Capitol Hill. (AP Photo/Gregorio Borgia, file)

On Wednesday, a new documentary premiered in Rome in which Pope Francis says on camera that L.G.B.T. people deserve respect, including civil legal recognition of their relationships. After the remarks from “Francesco,” by the filmmaker Evgeny Afineevsky, were made public on Oct. 21, there was some backlash and confusion. Were the remarks new? Where did they come from? Was the translation correct? It turns out that the pope made the comments in a 2019 interview with the Mexican network Televisa, though they never aired, perhaps at the insistence of the Vatican’s press office. Regardless, they are public now.

For the first time as pope, he said in no uncertain terms that gay couples deserve civil unions.

[Related: Explainer: What Pope Francis actually said about civil unions—and why it matters]

For the past several years, I have researched the Catholic Church’s response to the H.I.V./AIDS crisis in the 1980s and 1990s for a book I’m writing that explores Catholicism and L.G.B.T. issues, and it was against that backdrop that I watched the new film and heard the pope’s words.

Back then, the Vatican and many U.S. bishops routinely took positions against civil rights for gay and lesbian people, condemning such proposals in official statements, lobbying mayors to veto passed bills and suing cities that implemented them. So video footage showing Pope Francis endorsing civil unions for same-sex couples represents a marked shift in tone for the Catholic Church, even if it is true that the pope has not changed the church’s teaching on marriage or sexuality.

Pope Francis endorsing civil unions for same-sex couples represents a marked shift in tone for the Catholic Church, even if it is true that the pope has not changed the church’s teaching.

As we chronicle in the America podcast, “Plague: Untold Stories of AIDS and the Catholic Church,” by 1986, nearly 25,000 Americans had died from AIDS, the vast majority of them gay men. Catholic hospitals and parishes provided medical and pastoral care, though often under the radar. That’s because the Vatican was in the midst of a crackdown on homosexuality.

In October of that year, under then-Cardinal Joseph Ratzinger, the Congregation for the Doctrine of the Faith released a statement condemning homosexuality, which set the Vatican’s tone for the next several decades. The letter to bishops calls homosexuality a “more or less strong tendency ordered toward an intrinsic moral evil” and an “objective disorder.” Over the next two years, groups of gay and lesbian Catholics were exiled from Catholic parishes all over the United States, part of a Vatican-ordered crackdown on groups and individuals pressing the church to change its teaching on homosexuality.

In major cities with significant populations of gay men suffering from H.I.V. and AIDS, Catholic bishops led campaigns to fight civil rights measures that would protect gay and lesbian people from housing, job and workplace discrimination. Gay activist groups, such as Dignity and ACT UP, responded by protesting against church leaders.

[Listen and Subscribe to “Plague: Untold Stories of AIDS and the Catholic Church.”]

The culture among ordinary Catholics was influenced by these pronouncements as well. One church leader, the late Archbishop John Quinn, said he felt sickened when a Catholic mother told her gay son, afraid and dying from AIDS in a hospital, that she regretted not having an abortion when she was pregnant with him.

Those who watch the church closely recognize—correctly—that the pope has previously expressed an openness toward civil unions. As the archbishop of Buenos Aires, he floated the idea to other bishops that they could support civil unions in an attempt to thwart a same-sex marriage law. The proposal was rejected. Following his election to the papacy, Francis has signaled an openness to civil unions, but he has not explicitly endorsed the idea.

Beyond support for civil laws, however, the Vatican reporter Christopher Lamb writes at The Tablet that the pope’s remarks in civil union emphasize a “pastoral shift” toward L.G.B.T. Catholics under Francis.

Indeed, Pope Francis has signaled from the start of his papacy that he wants a more welcoming tone toward L.G.B.T. Catholics. When asked about gay priests in 2013, he responded famously, “Who am I to judge?” Two years later, in 2015, the pope met with a transgender Catholic and promised him that L.G.B.T. people were welcome in the church. Last year, the pope met privately with my colleague James Martin, S.J., a prominent advocate for L.G.B.T. Catholics. And earlier this month, the pope told a group of parents with children who are L.G.B.T., “God loves your children as they are” and “the church loves your children as they are because they are children of God.”

And as reported in “Francesco,” the pope has befriended Juan Carlos Cruz, a gay man who survived sexual abuse by a priest. Mr. Cruz recalls in the documentary that church leaders in Chile tried to blame him for the abuse, using his sexual orientation against him. When he told the pope this story, Mr. Cruz said, Francis responded by saying: “God made you gay. God loves you like you are and you have to love yourself.”

Some L.G.B.T. people have expressed sentiments that the pope’s words about civil unions are too little, too late. In the United States especially, that could be true; same-sex marriage has been legal since 2015. Some transgender Catholics point out that the pope regularly denounces “gender ideology.” Pope Francis regularly affirms the church’s teaching on marriage and sexuality, and many Catholics note that church teaching in this area has not changed, even as the pope’s tone has shifted.

Some L.G.B.T. people have expressed sentiments that the pope’s words about civil unions are too little, too late. In the United States especially, that could be true.

And some U.S. bishops and other church leaders are pushing back on the pope’s statement. But as the veteran Vatican analyst John Thavis put it to The New York Times, the pope understands that a welcoming pastoral tone is important.

“He recognizes the headline he created yesterday is more important than all the footnoting and cleaning up that comes afterward,” Mr. Thavis said. “His goal is to set a tone, not a policy, so I don’t think he’s worried about the fallout.”

But for L.G.B.T. Catholics in the United States who remember the dark days of the 1980s, in the crucible of the AIDS epidemic, when their friends and partners were shunned by families and church leaders, the pope’s words may strike a strong emotional chord. Many L.G.B.T. people, Catholics included, do not live their lives seeking acceptance from church leaders. But encouragement is welcome, and a shift in pastoral practice is certainly encouraging, even for Catholics too young to remember the height of the AIDS crisis.

“[F]or the first time, I saw signs of a Church that is growing ever closer to its mission of being the embodiment of God’s all-encompassing love,” wrote Flora Tang, a graduate student at the University of Notre Dame, about the pope’s comments. “For that, I am grateful.”

To downplay the pope’s view on civil unions today is to ignore the not-too-distant past, when L.G.B.T. Catholics could not even dream of a papal pronouncement such as this.

But perhaps even more important, for L.G.B.T. Catholics living in places where homosexuality is taboo and even illegal, the pope’s words may indeed throw a lifeline.

A 22-year-old gay Catholic from Uganda, for example, wrote in an email to me that the pope’s comments “will help in decreasing a lot of stigma from churches and religious leaders that think L.G.B.T.Q persons are ungodly.”

There is a cliche that the church thinks in centuries. So it is important to keep in mind how much the tone around L.G.B.T. issues has changed in just decades. In 1986, the Vatican described homosexuality as an “objective disorder,” language that remains in the Catechism of the Catholic Church. In 2003, the Vatican published a document saying the church could never support civil unions. Two years later, the author of those statements was elected pope. In 2015, the U.S. Conference of Catholic Bishops called the U.S. Supreme Court’s decision to legalize same-sex marriage “a tragic error.” Against all that, to downplay the pope’s view on civil unions today is to ignore the not-too-distant past, when L.G.B.T. Catholics could not even dream of a papal pronouncement such as this.