When is church coming back? With no national guidelines, look for a hodgepodge of procedures. 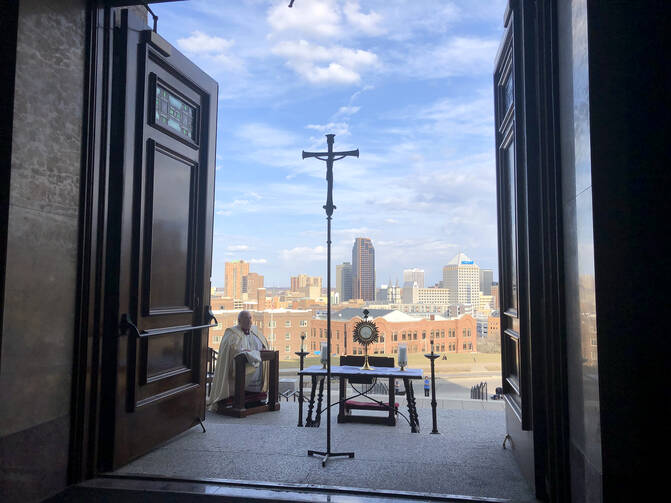 Archbishop Bernard A. Hebda of St. Paul and Minneapolis prays in front of the Blessed Sacrament at the Cathedral of St. Paul in St. Paul on March 27. (CNS photo/Dave Hrbacek, The Catholic Spirit)

Since the federal government has no plans to release guidelines in the near future to help religious organizations reopen their facilities safely in the wake of the coronavirus pandemic, Catholic dioceses throughout the United States are making decisions on their own, resulting in a hodgepodge of procedures and protocols.

Catholic bishops representing Minnesota’s six dioceses teamed up with the Becket Fund for Religious Liberty when they announced they would defy the state’s ban on large gatherings by reopening their churches as early as May 26. But in the Archdiocese of New York, Catholics learned on May 21 of plans to reopen churches gradually in their area, beginning with private prayer. And in Chicago, the archdiocese launched a training program this week for priests and parish leaders with the aim of reopening some parishes. In other places, churches that already resumed public Masses are again closed, such as in Houston, where several priests tested positive for the coronavirus.

Catholic dioceses throughout the United States are making decisions on their own, resulting in a hodgepodge of procedures and protocols.

Minnesota Gov. Tim Walz announced on May 20 that shopping centers, hair salons and restaurants will be allowed to reopen, with reduced capacity and other restrictions, on June 1. Church leaders said they were disappointed that religious spaces were not included and decided they would defy the state ban that caps gatherings at 10 people.

“The bishops of Minnesota are united in our conviction that we can safely resume public Masses in accordance with both our religious duties and with accepted public health and safety standards,” reads a letter issued on May 20 and signed by seven Minnesota bishops. “We can worship in a way that reflects both the love of God and the love of our neighbors.”

Parishes that reopen will follow “self-imposed” safety guidelines, Eric Rassbach, senior counsel at the Becket Fund, which is representing the dioceses as well as a group of Lutheran churches in Minnesota, said in a call with reporters on May 21. They include restricting crowds to 33 percent of each building’s capacity, limiting singing and prohibiting touching. The Becket Fund sent a letter to Minnesota’s governor and attorney general on May 20 arguing that a ban on religious gatherings is a violation of constitutional rights and that the state “went out of its way to specifically and purposefully single out religious organizations for disparate and disfavored treatment.”

“The churches are going to continue to be good citizens,” Mr. Rassbach said, adding that churches want “equal treatment with the malls and the casinos and the candy stores” that are allowed to reopen under the state’s new guidelines. In their letter, the Minnesota bishops said they recognize that some parishes may not feel they are ready to reopen by the end of the month and are free to remain closed. They said they chose to defy the state’s order after requests to the governor’s office asking when churches would be allowed to resume operations went unanswered. “We cannot allow an indefinite suspension of the public celebration of the Mass,” the bishops wrote.

There have been public protests in some states calling on political leaders to ease restrictions on activities that may spread the virus, and President Trump weighed in on May 21, saying in particular, “One of the other things I want to do is get the churches open. The churches are not being treated with respect by a lot of the Democrat governors.”

But a recent poll suggests most Americans remain worried about a resurgence of Covid-19 cases. According to an Associated Press poll conducted in mid-May, about six in 10 Americans said stay-at-home orders remain necessary and nearly seven in 10 Americans said gatherings should be restricted to 10 people, though that was down from 82 percent in April. Nearly all Catholic parishes in the United States have been closed for public Masses since March, and while some Catholics have criticized church leaders for keeping the doors closed, others have cautioned that opening too quickly will put people in harm’s way.

Minnesota bishops: “We cannot allow an indefinite suspension of the public celebration of the Mass.”

David Haas, a nationally renowned composer and liturgist, said that churches should consider the health risks that come with opening prematurely. He added that a Mass with restrictions on full participation misses the point of liturgy.

“It seems dangerous and a bit reckless to be putting the ability to be in the presence of Christ found and shared in the ritual of consecrated bread and wine above the concern, health and well-being for the other,” Mr. Haas wrote at PrayTellBlog, a group website.

“I know, it is hard. But can we discern and examine where our decisions might lead us, not only in terms of safety and public health, but also possibly putting the gospel cause at peril?” he wrote.

According to the Centers for Disease Control and Prevention, religious gatherings are among the activities that are ripe for spreading the coronavirus. On May 19, the C.D.C. released a report tracing an outbreak that sickened dozens of people to events at a church in rural Arkansas.

According to the Centers for Disease Control and Prevention, religious gatherings are among the activities that are ripe for spreading the coronavirus.

“Faith-based organizations that are operating or planning to resume in-person operations, including regular services, funerals, or other events, should be aware of the potential for high rates of transmission of SARS-CoV-2,” the report states.

Other instances of Covid-19 spreading at religious gatherings include a choir practice in Washington in March and, more recently, a Catholic church in Houston that had reopened for public worship. In that instance, three priests tested positive for coronavirus though they were asymptomatic. The church has again suspended public worship.

In a press release, the Archdiocese of Galveston-Houston said five Redemptorist priests at a parish in Houston had tested positive for coronavirus, including two who are asymptomatic and had celebrated public Masses at Holy Ghost Church after reopened on May 2. Another priest who lived at the Redemptorist residence, the Rev. Donnell Kirchner, died on May 13 after contracting pneumonia. The press release said it is not known if Father Kirchner had contracted coronavirus like the five other priests.

Elsewhere in Texas, Mark Seitz, the bishop of the El Paso Diocese, posted YouTube videos in English and Spanish on May 20 urging people to wear masks when they are around other people, rejecting the notion that masks are a personal choice.

“Masks are not a matter of expressing your liberty, doing whatever you want in the midst of the world. Masks are about expressing your care for other people,” Bishop Seitz said. When churches open in the Diocese of El Paso, he added, masks will be required.

Public health experts put out new warnings this week that areas that reopen too quickly, including Texas, will likely see a spike in new coronavirus cases. “The virus is not going to disappear,” Dr. Anthony Fauci told The Washington Post on May 20. “It’s a highly transmissible virus. At any given time, it’s some place or another. As long as that’s the case, there’s a risk of resurgence.”

Mitigating that risk drives the plans for church reopenings in Chicago and New York, two of the largest archdioceses in the United States.

In a press conference on May 21, New York’s Cardinal Timothy Dolan, donning a face mask, said parishes would reopen under a six-part plan. Churches must undergo rigorous sanitation, he said, and the number of worshipers will be restricted in the early phases of reopening.

The guidelines state that parishes can use online registration to help manage crowd size but also say “some space designation should be allowed for walk-in attendance.” Churches can also plan to host outdoor or “drive-in” Masses. The new plan covers the Archdiocese of New York as well as the Diocese of Brooklyn.

Speaking to reporters, the cardinal praised the New York Catholic community for being "constant in its allegiance to the very wise restrictions of our respected health care professionals and elected officials these past 10 difficult weeks.”

But he said it is time to begin reopening churches.

“It’s time for appropriately gradual and staggered reopening of services,” Cardinal Dolan said. “Houses of worship are essential services to the well-being of our people.”

Similar guidelines were announced earlier this month for the Archdiocese of Chicago, which this week began online training workshops for parish leaders wishing to reopen their churches.

Before being allowed to reopen, parishes in Chicago must train staff and volunteers to help with sanitation and crowd control, procure stockpiles of masks, gloves, face shields and hand sanitizer, and establish a reservation system that ensures capacity limits will be honored.

Even with all these precautions, the guidelines note that as long as the coronavirus is present so is risk.

“While our parish staffs will attempt to take appropriate precautions consistent with the advice of public health authorities,” the training materials state, “parishioners and guests should understand that they assume the risk of contracting Covid-19 anytime they enter a public space since such precautions do not eliminate the risk of infection.”

Correction, June 4, 2020: An earlier version of this article incorrectly stated the name of Minnesota's governor as James Walz. The governor's name is Tim Walz.

More: Coronavirus / Liturgy / US Church / Faith in the time of Coronavirus