As pressure builds to reopen churches, can local governments keep them closed? 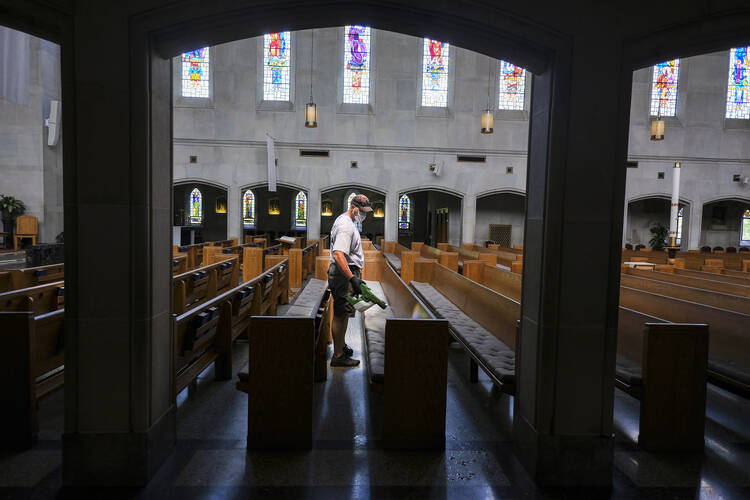 Mike Decker of Nashville, Tenn., applies an electrostatic disinfectant at Christ the King Church May 15, 2020. Bishop J. Mark Spalding has reinstated the public celebration of Mass in the diocese at the discretion of pastors, effective May 18. (CNS photo/Rick Musacchio, Tennessee Register)

The spread of Covid-19 across the world coincided with Lunar New Year, Passover, Easter and, now, Ramadan celebrations. Covid-19 transmits from person to person through droplets released by coughing, sneezing, talking, singing and, possibly, mere breathing. This makes traditional modes of communal worship particularly dangerous, which is why church services and religious gatherings have spawned super spreaders and infection clusters.

To help stop the pandemic, holy sites from the Western Wall in Jerusalem to St. Peter’s in Vatican City to the Grand Mosque in Mecca were closed to visitors; and wherever there is internet or cell phone service, synagogues, churches, mosques and temples are livestreaming religious services, so worshipers can pray along from the safety of their homes. Nevertheless, some religious leaders and congregants oppose public health prohibitions on live worship services and large funerals.

In the United States, the Trump administration is permitting state and local governments to exert their traditional power to draft and enforce health and safety regulations. This has led to a variety of responses across the country and even within the same state.

The Trump administration is permitting state and local governments to draft and enforce health and safety regulations. This has led to a variety of responses across the country and even within the same state.

On April 1, Florida Gov. Ron DeSantis caused confusion and distress when he issued two conflicting orders. The first exempted religious services from a statewide prohibition on gatherings of more than 10 people but kept stricter local orders in place; the second prohibited enforcement of any conflicting local orders, which nullified a county social distancing order designed to lower the infection rate in Tampa.

On May 13, the Wisconsin Supreme Court invalidated the state’s Safer-at-Home Order as an improperly issued administrative rule but failed to give either the governor or legislative branch any time to issue new restrictions, which immediately resulted in packed bars and taverns. The Wisconsin case was brought by the State Legislature and the outcome was decided by the court’s interpretation of the Wisconsin Constitution and state statutes, but claims against restrictions on religious groups rely on federal First Amendment principles.

The First Amendment states: “Congress shall make no law respecting an establishment of religion, or prohibiting the free exercise thereof.” In 1940 the Supreme Court decided that the free exercise clause, originally applicable only to the federal government, also limits state and local action because the practice of religion is a fundamental liberty interest protected by the Fourteenth Amendment—“nor shall any state deprive any person of life, liberty, or property, without due process of law.”

In 1940 the Supreme Court decided that the free exercise clause, originally applicable only to the federal government, also limits state and local action because the practice of religion is a fundamental liberty interest.

If the words “no law” were interpreted literally, all public health regulations limiting the size of religious gatherings would be unconstitutional, but the First Amendment is not applied literally. Instead, the Supreme Court has devised various tests to determine when the government may restrict religious activity.

The leading case is Employment Division v. Smith (1990), in which Justice Antonin Scalia wrote that the First Amendment permits governments to enforce “valid and neutral” laws even when they impact religious practices. Under this standard, any public health restriction that applies equally to all gatherings is constitutional.

Worship services, however, are also protected by the free speech and assembly clauses of the First Amendment—“Congress shall make no law...abridging the freedom of speech...or the right of the people peaceably to assemble.” These rights are protected by a different set of standards that permit the government to impose reasonable time, place and manner restrictions, like fire-safety building capacity limits, when those restrictions are content-neutral (that is, apply equally regardless of the message of the speech) and “narrowly tailored to serve a significant governmental interest.” If, however, the government treats faith-based gatherings differently from secular meetings or treats religious groups differently from each other, it must meet a higher strict scrutiny standard and demonstrate that the law it seeks to enforce is the least restrictive means to meet a compelling government need.

The current Supreme Court is likely to give great weight to religious speech rights, but it also must consider cases that prohibit the judiciary from overturning “reasonable” and “necessary” public health and emergency measures.

The current Supreme Court is likely to give great weight to religious speech rights, but it also must consider other precedential cases that prohibit the judiciary from overturning “reasonable” and “necessary” public health and emergency measures. As Attorney General William P. Barr recently announced, “In exigent circumstances, when the community as a whole faces an impending harm of this magnitude, and where the measures are tailored to meeting the imminent danger, the constitution does allow some temporary restriction on our liberties that would not be tolerated in normal circumstances.”

The Justice Department is advocating that courts thread the needle between protection of fundamental rights and deference to emergency public health measures by relying on Jacobson v. Massachusetts, a 1905 Supreme Court case that upheld smallpox vaccination requirements. The Jacobson decision declared that courts should only overturn health and welfare restrictions when: “a statute purporting to have been enacted to protect the public health, the public morals, or the public safety has no real or substantial relation to those objects, or is, beyond all question, a plain, palpable invasion of rights.”

The Jacobson case was relied upon to justify Texas’s now-expired classification of abortion as a nonessential medical procedure, and the federal government is applying it in support of religious adherents who are deemed to have been singled out for selective enforcement of social distancing rules.

Regardless of the legal standard applied, outcomes will be based on the unique facts of each case, with uniformly applicable regulations much more likely to be upheld than those that distinguish between worship and “essential” services. On May 16, for example, a federal judge temporarily prohibited enforcement of a North Carolina executive order that required gatherings of more than 10 people to ”take place outdoors unless impossible” because funerals, but not religious services, were exempt. From a practical standpoint, the longer social distancing restrictions are kept in place, the more difficult they will be to enforce. Emergency measures typically are short-lived; as time goes on, the pressure for live worship services will increase, particularly when neighboring locales have different rules.

Indeed, some law enforcement officers and at least one judge are already refusing to enforce business restrictions. Ultimately, health and safety measures will depend more on congregations themselves than on the judiciary or government authorities. As the Wisconsin Faith Voices for Justice group wrote in its amicus brief, the “Covid-19 pandemic has created a time for ‘holy imagination’ that Wisconsin’s clergy are using to support and strengthen their communities.”

We are, after all, our brother’s and sister’s keepers.