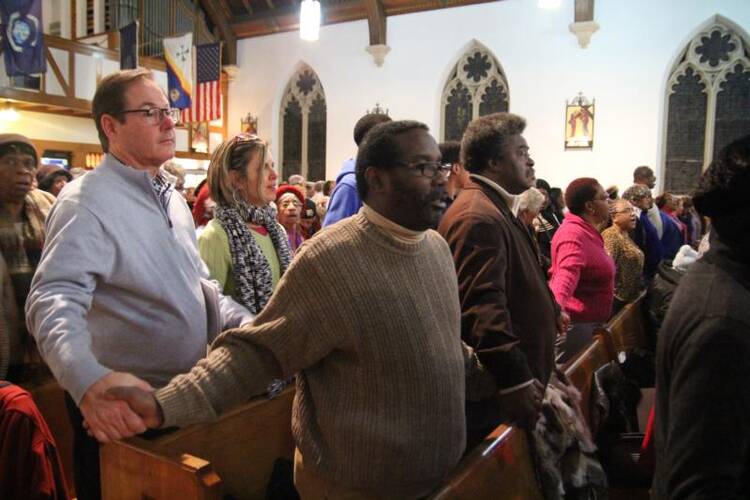 People join hands during a service at St. Katharine Drexel Church in Chester, Pa. In a March 12, 2020, announcement, the Philadelphia Archdiocese said Catholics in the archdiocese who do not wish to attend Sunday Mass for fear of spreading or contracting coronavirus are no longer obligated to do so, until further notice. (CNS photo/Sarah Webb, CatholicPhilly.com)

As coronavirus cases across the U.S. continue to rise in what the World Health Organization now calls a pandemic, several dioceses have elected to temporarily suspend public Masses and dispense Catholics from their weekly obligations.

From Seattle, to Washington, D.C., bishops are encouraging the faithful, especially those over 60 years old or afflicted with underlying health conditions, to stay home. On March 11, Archbishop Paul D. Etienne of Seattle, where over 30 people and many elderly have died of the virus, announced the suspension of public Masses in his archdiocese. “Out of an extreme caution, we want to do our part to prevent the spread of this virus…. So I’m asking all of our pastors and parishes, effective immediately, to suspend public celebration of the Eucharist,” said Archbishop Etienne in a video message.

The Archdiocese of Seattle has been joined by numerous other dioceses, including those of Little Rock, Salt Lake City and Santa Fe, in canceling public Masses. Major archdioceses, such as in Chicago and Newark, have undertaken similar precautious. In Philadelphia, newly appointed Archbishop Nelson J. Pérez relieved Catholics of their Sunday Mass obligations but added in a statement on March 12 that “all regularly scheduled Masses will remain open to the public for those who wish to attend.”

As in Philadelphia, the Dioceses of Cincinnati, Peoria, Buffalo, Raleigh and Toledo have all provided Catholics with a dispensation from attending Mass. “I fully realize that this moment of great concern could pass rather quickly, but I also do not think we can take any risk at this time, of endangering lives,” wrote the Most Rev. Daniel R. Jenky, C.S.C., of Peoria, on March 12. “ I believe it is more prudent to be ‘proactive’ rather than ‘reactive’ in the face of serious danger,” he added.

In Washington, D.C., where starting March 14 all Masses and campus ministries will cease, Archbishop Wilton D. Gregory said, “My number one priority as your Archbishop is to ensure the safety and health of all who attend our Masses, the children in our schools, and those we welcome through our outreach and services.”

While the Archdiocese of New York will still hold public Masses, the archdiocese has “urged the faithful to use their prudential judgment” when deciding whether to attend. “All are urged to keep in prayer those who are suffering from the coronavirus, as well as doctors, nurses, caregivers, and all those who are working to combat the disease,” reads an archdiocesan statement released on March 13.