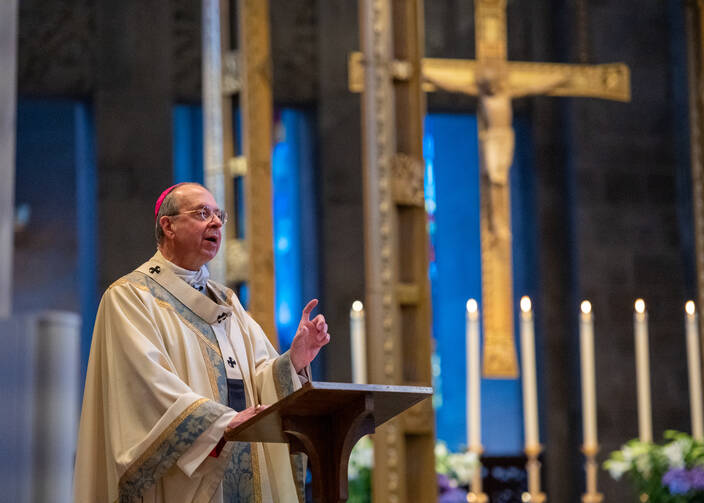 No touching. No singing. And stay at least six feet apart.

Catholics eager to return to their parishes, nearly all of which have been closed in the United States for nearly two months because of the coronavirus, are getting a sense of what Masses might look like when churches reopen their doors. Despite a high degree of uncertainty, it is safe to say life as Catholics knew it will not look—or sound—the same for some time. Catholic leaders in many states, including Florida, Georgia, Ohio, Pennsylvania, Texas and Wisconsin, have announced guidelines about how churches will reopen, with many including gradual phase-ins that begin with small celebrations that incorporate social distancing measures.

In Illinois, the state’s six dioceses released a plan on May 14 for reopening parishes.

The plans call for a gradual reopening of churches, in concert with public health guidelines and with approval by dioceses. In Illinois, parishes will create teams that will ensure proper sanitation efforts between services and that will help worshipers follow social-distancing guidelines.

In the first phase, parishes will open for baptisms, weddings, funerals and confessions, with attendance capped at 10 people. Some churches will also open for private prayer, but public Masses will still be prohibited. In the second phase, parishes can seek permission to resume public Masses.

It is safe to say life as Catholics knew it will not look—or sound—the same for some time.

“We expect this situation to continue for some weeks, and any plan for reopening our churches for public worship must include every precaution to ensure public gatherings do not create a second wave of contagion, thus squandering the gains made through our sacrifice in these days,” Chicago’s archbishop, Cardinal Blase Cupich, wrote in a letter to parishioners announcing the plan.

The principles for safely reopening Illinois churches include an exhortation for Catholics to model safety protocols as a form of good citizenship. “Calling people to exercise faithful citizenship will be key. Each Catholic will need to take personal responsibility for the common good as well as their own safety,” the guidelines state.

Catholics in the Archdiocese of Baltimore will also be allowed back in churches soon, following guidelines similar to those in Chicago. The archdiocese released a 36-page document on May 12 outlining safety protocols for the resumption of sacraments, including public Masses, plus private prayer and other parish activities. It also released a six-minute video explaining the new policies.

In addition to requiring the use of masks during Mass, worshipers will not exchange the sign of peace, printed materials such as bulletins are prohibited, and “people are asked not to embrace friends or others at Mass,” the video says.

In the Archdiocese of Detroit, individual parishes are being told they may resume public Masses as soon as next week.

Calling the celebration of Mass “the most ‘essential’ activity known to our world,” Detroit Archbishop Allen H. Vigneron pointed to the easing of other restrictions in Michigan as a signal that it is time to reopen parishes as well. In that state, armed protesters have assailed elected leaders over stay-at-home orders.

Cardinal Cupich: Reopening parishes must not “create a second wave of contagion, thus squandering the gains made through our sacrifice in these days.”

Public Masses will begin in some parishes on May 19, though the guidelines include strict limits on crowd size and require social distancing.

“The Mass you may attend in the weeks ahead will look and feel quite different from the Mass you remember from two months ago,” Archbishop Vigneron wrote in a letter announcing the news. “The pandemic is not over and safety precautions must be followed in order to promote the continued health and safety of everyone in our community.”

According to the letter, all parishes are expected to resume public Mass by May 29. The assemblies cannot exceed 25 percent capacity of the building, worshipers must wear face masks, those who do not live in the same household must sit six feet apart, and collection baskets will be centrally located and not passed.

In addition, the restrictions will make it difficult to return to normal when it comes to music. Choirs are to be kept small, musicians must stand 10 feet apart, and communal singing is discouraged.

“Health experts indicate that singing produces [six to 10 times] more droplets from our mouths than recitation,” the guidelines state. “Keeping singing for the assembly to a minimum is advised and the congregation should not remove their masks to sing.”

Choirs are to be kept small, musicians must stand 10 feet apart, and communal singing is discouraged.

On the matter of Communion, Detroit’s guidelines say receiving the host on the tongue will be permitted. Parishes may consider asking those wishing to receive the host on the tongue to go last, or they may designate a special line for them. For everyone else receiving Communion, they must remove gloves and masks before they approach the priest or extraordinary minister, and they must respond “Amen” while standing six feet apart.

In Virginia, a stay-at-home order for the populous northern part of the state has been extended through late May. But parishes there will be allowed to conduct Communion services, “provided they are done in a manner consistent with existing social distancing protocols and health and safety guidelines,” according to a May 15 statement from the Diocese of Arlington.

For parishes outside Virginia’s northern counties, public Masses can resume “if the parish’s pastor feels confident that Masses can be celebrated safely and in accordance with diocesan protocols.” Churches will keep crowds at below 50 percent of capacity, and masks must be worn by parishioners.

Coronavirus is a storm, but we must keep singing in the rain
Matt Malone, S.J.

While the vast majority of U.S. churches have closed as a result of the pandemic, a number of mostly nondenominational churches have sued governors in recent weeks, arguing that stay-at-home orders and caps on crowd sizes infringe on their religious freedom. All U.S. Catholic dioceses suspended public Masses in March, though some Catholics have pushed bishops to reopen churches sooner. On May 15, about three dozen protesters, most not wearing masks, gathered on the steps in front of Chicago’s Holy Name Cathedral, some carrying signs that read “Our Churches Are Essential.” In his letter announcing the reopening process, Cardinal Cupich rejected notions that closed churches are the result of government overreach.

“Surely, there have been moments in history when governments and rulers have persecuted Christians and banned their public worship. This is not one of them,” he wrote. “Rather, the present restrictions come in response to an extreme medical emergency as local, state and federal authorities—specifically public health officials—legitimately fulfill their responsibilities to safeguard human life and the common good.”

Archbishop William Lori expressed similar sentiments in an interview with Catholic News Service. The former head of the U.S. Conference of Catholic Bishops’ committee on religious liberty said he closed churches in Baltimore to protect the common good.

“It’s not a very pastoral thing to put people in harm’s way,” he said. “You know, we really didn’t close the churches because the government said we had to. I think we understood in and of ourselves that we owed it to our people to be responsible about this and to protect them from harm.”