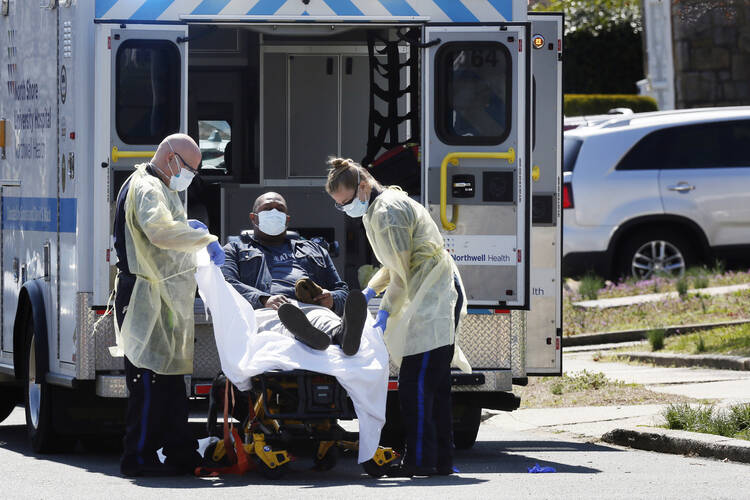 Last New Year’s Day—a mere three months ago—few could have imagined that by this date the United States would be in the deathgrip of a pandemic and on the brink of a prolonged economic recession. The nation’s sudden envelopment into this two-fold crisis has left politicians and policy-makers scrambling just to make sense of events, let alone to make the life-and-death decisions that fall to them. Given the sheer scale and complexity of the crisis, it is not surprising that public officials should struggle to find answers. At a minimum, however, they need to ask the right questions, especially about what they do not know, which is a great deal more than most would care to admit.

In recent days, a few public officials, including President Trump, have suggested that the current efforts to mitigate the impact of the coronavirus outbreak—social distancing and public closures—should be curtailed earlier than public health experts, including the president’s own advisors, think is prudent. It is clear that the virtual lockdown of the country is causing vast economic damage. It is also true that recessions and economic hardship have life-and-death consequences, often resulting in higher rates of suicide, domestic violence and substance abuse.

It is understandable, then, that people are asking whether the coronavirus mitigation measures are doing more harm than good. These discussions usually take the form of comparing an unknown data point (i.e., the number of avoidable deaths Covid-19 will cause) against another unknown data point, which is assumed to be worse (i.e., a second Great Depression), or against a known, unarguable good (i.e., economic growth).

As for the first unknown, the number of avoidable deaths, we do know something—namely, that there will be many such deaths and each involves a profound human tragedy. We also know that the epidemiological models have large confidence intervals, meaning that the actual number of avoidable deaths is projected to fall within a very large range. We do not know, for example, whether the official number of deaths in the United States will be 10,000, 80,000 or more.

The reason the confidence intervals are so large is because we have terribly insufficient data, due in large part to the inadequate availability of testing. The federal government has badly bungled its response. The effects of ongoing, systematic underinvestment in the nation’s public health infrastructure were made worse by a president who spent the first weeks of this impending crisis behaving as though the number of cases would remain low. Mr. Trump downplayed the threat, and a federal bureaucracy unaccustomed to using its own power (including marshaling and coordinating private-sector forces) failed to efficiently address problems that affect the common good.

It is impossible to make good prudential decisions about completely unknown risks.

If U.S. officials had prepared for the coronavirus landfall by building up effective testing capacity, the nation would have been better able to enter into the required calculus. Perhaps the United States would have been able to mount a response similar to that of South Korea—isolating and contact-tracing known infected individuals instead of quarantining the whole population. This would permit public officials to accurately compare a more narrowly modeled epidemiological risk against the economic risk. As of now, we do not know enough to make that comparison.

These process failures have left Americans to debate ethical tradeoffs for which we lack the information to make good prudential decisions. It is impossible to make good prudential decisions about completely unknown risks, and it is a catastrophic failure of imagination and moral responsibility to act as if we are unable to learn what we need to know to make a better decision.

Caring more for each other could have ameliorated the pandemic. It’s not too late.
Thomas J. Reese

Making decisions such as these necessarily involves risk assessments and weighing different possible outcomes. But such decision-making must not descend into a strict arithmetical calculation that values human life as merely one material good among many. The inherent worth and dignity of human life are immeasurable.

We know there are many people who know more than the rest of us. We should listen to them. Experts can be overrated and can surely make mistakes, but in a public health emergency, prudence dictates both following their advice and doing what is possible to improve the data they are using to provide it.