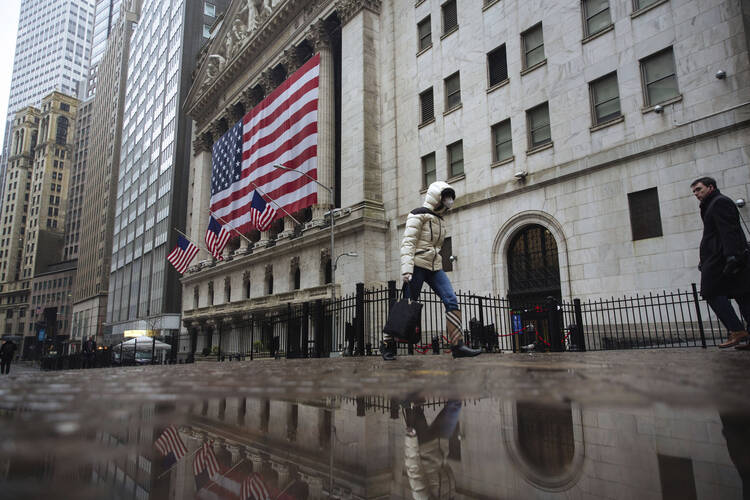 We are in the midst of the greatest public health crisis in the United States since the Spanish flu. The government at all levels is at war with the coronavirus, from treating those who are afflicted to subsidizing research for an effective vaccine. But beyond the health initiatives, the federal government must address the economic consequences of this pandemic with quick and bold action, even at the cost of significantly raising the federal debt.

One does not need to be an economist to imagine the long-term consequences of the plunging stock market and the abrupt closings of businesses. In the financial sector, they mean massive layoffs and the drying up of credit. Meanwhile, the layoffs and reduced pay for workers in service industries raises the likelihood of defaults on mortgage or rental payments. The same is true for small businesses such as restaurants, which still have to make rental payments in spite of lost revenue due to mandatory closings. Finally, banks may end up defaulting on interbank loans within the financial sector. Thus, the coronavirus crisis can easily trigger a financial crisis with three layers of default.

The federal government must address the economic consequences of this pandemic with quick and bold action, even at the cost of significantly raising the federal debt.

Responses to the pandemic so far include a monetary policy of cutting interest rates to practically zero and a White House proposal for an income tax cut. These are marginal policy responses that can be useful in normal times—but we are not in normal times. More changes are likely to come but in a piecemeal manner.

The economist Arthur Lewbel of Boston College compared the Federal Reserve’s interest rate cut to a police shootout in a movie in which the cops run out of bullets. As for the proposed payroll tax cut, it does not help much given that we are seeing massive job loss reducing household incomes to zero. And for those still holding jobs, the prospect of keeping more of their income may be an incentive not to take leave when they are experiencing symptoms of the coronavirus.

But there are recent examples of bold policy actions in response to an economic crisis. For example, in Hong Kong there was a widespread speculative sell-off of stocks listed in the Hang Seng index in the late 1990s. Joseph Yam, the head of the Hong Kong Monetary Authority, intervened by purchasing massive amounts of stocks, which bolstered confidence and brought about a turnaround in the exchange. This helped rescue Hong Kong from the “contagion effects” of the Asian economic crisis hitting Malaysia, Indonesia and Thailand.

The Federal Reserve Bank should stand ready to purchase equities to keep the stock market from falling below a predetermined level.

Similarly, the economist Roger Farmer of the University of Warwick has long advocated a policy of direct intervention by the Fed to target a rate of growth of the overall stock market index as a way of stabilizing expectations. He has argued that the stock market, for better or worse, drives spending and investment decisions. That is, even if share prices are temporarily misaligned with economic fundamentals, people react to swings in the value of their portfolio wealth.

What Mr. Farmer advocates for normal times can certainly be tried now to prevent massive freefalls and wild gyrations in the stock markets. There is no reason for the Fed not to announce at least a floor for share prices in the Dow Jones, Standard & Poor and Nasdaq indices and to stand ready to purchase equities to keep the index from falling below this floor. Mr. Farmer recently estimated that a persistent freefall in the market will lead to a U.S. unemployment rate of 13.5 percent. This is no time to dither.

A similar approach to stabilizing household income would be preferable to income tax cuts. The federal government can use the unemployment insurance program to provide longer-term income maintenance for workers displaced by the coronavirus across a variety of service industries so that they can provide for their families as well as make rental or mortgage payments. The Small Business Administration can provide not just loans but direct grants to small businesses so that they can meet rental payments. Finally, the Department of Education may make transfers to educational institutions, both private and public, caught short in revenue due to the loss of students.

The Small Business Administration can provide not just loans but direct grants to small businesses so that they can meet rental payments.

As we have seen with the global financial crisis of 2008, the after-effects may last far longer than the health crisis itself. Defaults in mortgages and rents, as well as a drastic reduction of credit by financial institutions due to falling share prices, can trigger another round of collapsing housing prices. Do we want to go through another prolonged and deep recession, similar to the one in 2008?

The federal government has the tools to take bold actions. Let’s make them work and work well this time.

One objection, of course, is that the debt of the U.S. government is already very high. Are we not just piling up further debt burdens for the next generation? As the economist Chris Sims of Princeton University notes, this is not a smart way to think about public debt. If we really care about the next generation, we want to leave them a decent economic infrastructure, stable housing markets, good schools, good health care and a clean environment. We cannot do that if we allow the economy to spin off into a protracted recession as a result of the coronavirus.

We have seen the harm of our delayed response to the medical aspects of this crisis. Let’s not follow suit with delayed and piecemeal monetary and fiscal responses. An inadequate response would compound this crisis with a prolonged and deep recession.