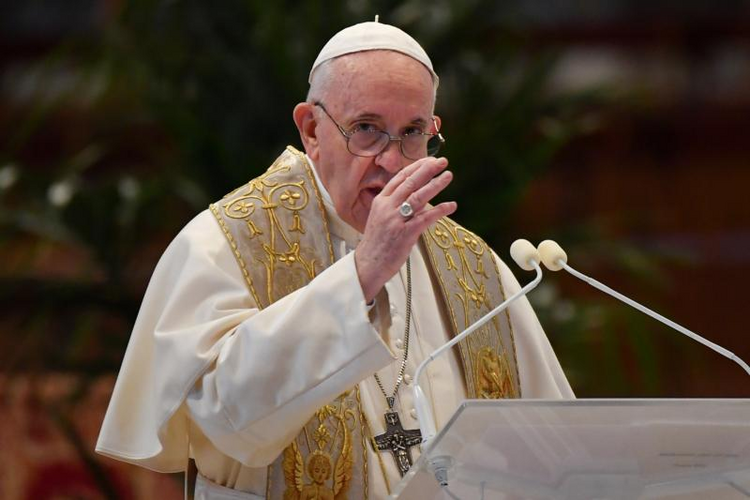 Pope Francis delivers his Easter blessing "urbi et orbi" (to the city and the world) after celebrating Easter Mass in St. Peter's Basilica at the Vatican April 12, 2020.

In a remarkable Easter Sunday letter to members of social movements around the world, Pope Francis, noting that the widespread suffering caused by the global coronavirus pandemic does not fall evenly, suggested that the crisis warranted the establishment of a universal basic wage. He described it also as an opportunity for affluent societies to “downshift” and re-evaluate patterns of consumption and exploitation.

“This may be the time to consider a universal basic wage which would acknowledge and dignify the noble, essential tasks you carry out,” Pope Francis wrote. “It would ensure and concretely achieve the ideal, at once so human and so Christian, of no worker without rights.” (In the original text, the pope used an expression, “el salario universal,” that is typically used in Spanish to refer to the universal basic income.)

He added, “I hope that this time of danger will free us from operating on automatic pilot, shake our sleepy consciences and allow a humanist and ecological conversion that puts an end to the idolatry of money and places human life and dignity at the center.”

“Our civilization—so competitive, so individualistic, with its frenetic rhythms of production and consumption, its extravagant luxuries, its disproportionate profits for just a few—needs to downshift, take stock and renew itself.” Pope Francis said that “technocratic paradigms (whether state-centered or market-driven) are not enough to address this crisis or the other great problems affecting humankind.”

Pope Francis: “I hope that this time of danger will free us from operating on automatic pilot, shake our sleepy consciences and allow a humanist and ecological conversion that puts an end to the idolatry of money.”

“Now more than ever, persons,” he said, “communities and peoples must be put at the center, united to heal, to care and to share.”

Editor’s Note, April 13: America Media received a clarification from Cardinal Michael Czerny, S.J., Under-secretary of the Migrants and Refugees Section of the Dicastery for Promoting Integral Human Development, correcting a misunderstanding about the expression “salario universal,” which America initially reported as equivalent to the concept of the “universal basic income.” America regrets the error

Cardinal Czerny wrote, “The Spanish expression ‘salario universal’ can well be translated into English as ‘universal basic wage.’ This is not to be understood as equivalent to universal basic income, but to a different notion, coming from the pope’s Argentinian background and his involvement with cartoneros [residents who collect and recycle trash for compensation] in Buenos Aires.

“The Holy Father means finding a way to give public recognition, the guarantee of some basic rights and a stable wage to the workers of the informal sector,” the cardinal wrote. “In other words, it is the solution to the problem that the same Easter Letter highlights a few lines earlier: ‘Many of you live from day to day, without any type of legal guarantee to protect you. [...] you have no steady income to get you through this hard time.’”

The cardinal said that the pope’s proposal “has a more precise scope than universal basic income, as it refers only to informal workers.”

In his letter, the pope called members of social movements, which include civil society agents of change from labor unions and indigenous rights activists to advocates for the homeless and the environment, “social poets because, from the forgotten peripheries where you live, you create admirable solutions for the most pressing problems afflicting the marginalized.”

“In these days of great anxiety and hardship,” the pope said, “many have used war-like metaphors to refer to the pandemic we are experiencing. If the struggle against COVID-19 is a war, then you are truly an invisible army, fighting in the most dangerous trenches; an army whose only weapons are solidarity, hope, and community spirit, all revitalizing at a time when no one can save themselves alone.”

Pope Francis noted that the global community of working people, many laboring precariously in the informal market, “have been excluded from the benefits of globalization.”

Noting that market solutions and state interventions frequently never reach these actors on the economic and geographic peripheries of modern life, Pope Francis encouraged members of social movements to continue to “roll up your sleeves and keep working for your families, your communities and the common good.”

“Your resilience helps me, challenges me, and teaches me a great deal,” Pope Francis said.

This global community of working people, many laboring precariously in the informal market, he said, “have been excluded from the benefits of globalization.” They “do not enjoy the superficial pleasures that anesthetize so many consciences, yet…always suffer from the harm they produce. The ills that afflict everyone hit [them] twice as hard.”

“How difficult it is to stay at home for those who live in tiny, ramshackle dwellings, or for the homeless,” the pope said. “How difficult it is for migrants, those who are deprived of freedom, and those in rehabilitation from an addiction. You are there shoulder to shoulder with them, helping them to make things less difficult, less painful. I congratulate and thank you with all my heart.”

The pope suggested that a reordering of priorities in the aftermath of the crisis should eventually lead to “universal access to those three Ts that [social movements] defend: Trabajo (work), Techo (housing), and Tierra (land and food).” Pope Francis has frequently referred to the adequate provision of the “three Ts,” or in English, the “three Ls” for “land, labor and lodging,” as fundamental to justly-ordered societies. They have been the minimum components for a dignified life cited by church-based popular movements, for example, in the final statement of the 2017 general assembly of the World Movement of Christian Workers in 2017.

His letter included strong words of encouragement for people whose campaigns for social change are often viewed with suspicion by the wider society “when through community organization you try to move beyond philanthropy or when, instead of resigning and hoping to catch some crumbs that fall from the table of economic power, you claim your rights.”

He told them: “You are the indispensable builders of this change that can no longer be put off.”

He also urged them to continue their vital, often unsung work for the common good. “I think of all the people, especially women, who multiply loaves of bread in soup kitchens: two onions and a package of rice make up a delicious stew for hundreds of children,” he said. “I think of the sick, I think of the elderly. They never appear in the news, nor do small farmers and their families who work hard to produce healthy food without destroying nature, without hoarding, without exploiting people’s needs.”

“I want you to know that our Heavenly Father watches over you,” Pope Francis said, “values you, appreciates you and supports you in your commitment.”

In his letter to America, Cardinal Czerny notes that in 2017, Pope Francis “clearly expressed worries about possible negative side-effects of something like guaranteed basic income.”

During a pastoral visit to Genoa in 2017, the cardinal pointed out, Pope Francis said:

It must be clear that the real goal to reach is not that of “income for all” but rather, “work for all.” Because without work, without work for all, there will be no dignity for all. The work of today and that of tomorrow will be different, perhaps very different—we think of the industrial revolution, there has been a change; here too there will be a revolution—it will be different from yesterday’s work, but it will have to be work, not pension, not retirement: work. … And there needs to be work for everyone. For young people…. Because these young people grow up without dignity, because they are not “united” by the labor that gives dignity. But the cornerstone of this question is this: a monthly check, a monthly allowance that enables you to support a family does not solve the problem. The problem must be resolved with work for everyone.

This report was updated on April 13 to add context to the translation of the pope’s use of the expression “el salario universal.”