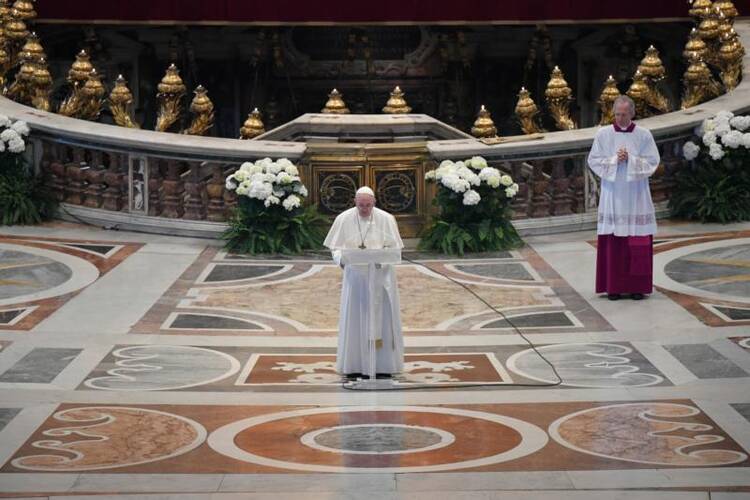 Pope Francis delivers his Easter message "Urbi et Orbi" (to the city and the world) after celebrating Easter Mass in St. Peter's Basilica at the Vatican April 12, 2020. The Mass was celebrated without the presence of the public due to the coronavirus pandemic. (CNS photo/Vatican Media)

Pope Francis issued a powerful and passionate appeal to political rulers and people everywhere in his yearly Easter message, “Urbi et Orbi” (“to the city of Rome and to the world”), saying “this is not a time for indifference because the whole world is suffering and needs to be united in facing the pandemic.”

He called on the nations of the world to overcome “indifference, self-centeredness, division and forgetfulness,” saying “these are not words that we want to hear at this time.” He appealed for “an immediate global ceasefire” in all armed conflicts, as well as for the relaxing of sanctions and the reduction or forgiveness of the debt of poor countries. He urged an all-out effort to care for those who lack the basic necessities of life, including refugees and migrants.

Speaking from inside St. Peter’s Basilica in front of the altar of confession where he had lit the Paschal fire last night, Pope Francis addressed a global audience of countless millions who were watching on television or following on social media. He told them that the Good News that “Jesus Christ is risen” springs up “like a new flame in the night of a world already faced with epochal challenges and now oppressed by a pandemic severely testing our whole human family.”

Pope Francis: Easter comes “like a new flame in the night of a world already faced with epochal challenges and now oppressed by a pandemic severely testing our whole human family.”

He said the news of Jesus’ resurrection offers “the contagion of hope, a message transmitted from heart to heart.” But “it is no magic formula that makes problems vanish.” Instead, “it is the victory of love over the root of evil, a victory that does not bypass suffering and death, but passes through them, opening a path in the abyss, transforming evil into good: This is the unique hallmark of the power of God.”

Noting that more than 100,000 people have died, 1.5 million people have been infected with the deadly virus worldwide and that two thirds of humanity are quarantined or under travel restrictions and are suffering also from economic difficulties, Francis spoke first about “the many who have been directly affected by the coronavirus: the sick, those who have died and family members who mourn the loss of their loved ones, to whom, in some cases, they were unable even to bid a final farewell.”

He prayed that “the Lord of life would welcome the departed into his kingdom and grant comfort and hope to those still suffering, especially the elderly and those who are alone.” He asked the Risen Lord to console and help “those who are especially vulnerable, such as persons who work in nursing homes or live in barracks and prisons.”

Addressing Catholics worldwide who are deprived of the sacraments because of the coronavirus pandemic, Pope Francis assured them that “the Lord has not left us alone! United in our prayer, we are convinced that he has laid his hand upon us."

Then, addressing Catholics worldwide who are deprived of the sacraments, particularly the Eucharist and Reconciliation, because of the pandemic, Pope Francis assured them that “the Lord has not left us alone! United in our prayer, we are convinced that he has laid his hand upon us, firmly reassuring us: ‘Do not be afraid, “I have risen and I am with you still!’”

Next, turning to health workers, Francis prayed that the Risen Jesus may “grant strength and hope to doctors and nurses” who are putting their own lives at risk to care for their neighbors. He expressed gratitude and affection “to all who work diligently to guarantee the essential services necessary for civil society,” including “law enforcement and military personnel who in many countries have helped ease people’s difficulties and sufferings.”

Recalling that the lives of millions of people have been suddenly changed by the coronavirus pandemic, Francis said, “for many, remaining at home has been an opportunity to reflect, to withdraw from the frenetic pace of life, stay with loved ones and enjoy their company.” However, he acknowledged that for many “this is also a time of worry about an uncertain future, about jobs that are at risk and about other consequences of the current crisis.”

Pope Francis encouraged political leaders “to work actively for the common good, to provide the means and resources needed to enable everyone to lead a dignified life."

Pope Francis encouraged political leaders “to work actively for the common good, to provide the means and resources needed to enable everyone to lead a dignified life and, when circumstances allow, to assist them in resuming their normal daily activities.”

He insisted that indifference was not an option in the face of the worldwide suffering caused by the pandemic, adding that the world “needs to be united.” He appealed for assistance for those living on the peripheries of cities, as well as for the refugees and the homeless. “Let us ensure that they do not lack basic necessities (all the more difficult to find now that many businesses are closed) such as medicine and especially the possibility of adequate health care,” he pleaded.

Then, in two significant appeals, Francis called for relaxing international sanctions on countries so their governments might be able to provide adequate support to their citizens at this time, and also for “the reduction, if not the forgiveness, of the debt” of the poorest nations to enable them to deal with the crisis.

Pope Francis told political leaders and peoples everywhere that “this is not a time for self-centeredness because the challenge we are facing is shared by all, without distinguishing between persons.”

Pope Francis told political leaders and peoples everywhere that “this is not a time for self-centeredness because the challenge we are facing is shared by all, without distinguishing between persons.” In this context, he reserved some of his strongest words for those in Europe, and especially the countries of the European Union which have not yet reached a common strategy to combat the pandemic and its aftermath.

He recalled that after the Second World War, Europe “was able to rise again, thanks to a concrete spirit of solidarity that enabled it to overcome the rivalries of the past” and said solidarity “is more urgent than ever” today. He told the 27 member states of the European Union that they are “facing an epochal challenge,” one that will decide not only the E.U.’s future but that of the whole world. He appealed to them not to lose the opportunity “to give further proof of solidarity” by turning to innovative solutions.

Emphasizing that “this is not a time for division,” Pope Francis called on all those responsible for conflicts to have the courage to support “an immediate global ceasefire in all corners of the world.” In this context, he called for a halt to the manufacture and international sale of arms, and condemned the spending of vast amounts of money on military equipment “that ought to be used to care for others and save lives.”

Emphasizing that “this is not a time for division,” Pope Francis called on all those responsible for conflicts to have the courage to support “an immediate global ceasefire in all corners of the world.”

He called for an end to the bloodshed in Syria, the conflict in Yemen and the hostilities in Iraq, Lebanon and Ukraine. He also prayed for an end to “the terrorist attacks against innocent people” in different African countries and for the resumption of dialogue between Israelis and Palestinians “in order to find a stable and lasting solution that will allow both to live in peace.”

Saying that “this is not a time for forgetfulness,” Pope Francis said the coronavirus pandemic “should not make us forget the many other crises that bring suffering to so many people.” He mentioned grave humanitarian crises in the countries of Asia and Africa, including one in the province of Cabo Delgado in the north of Mozambique (where an Islamist insurgency has taken root amidst profound economic, social and political dysfunction).

He drew attention especially to the plight of refugees displaced because of wars, drought and famine and prayed that the Risen Lord “may grant protection to migrants and refugees, many of them children, who are living in unbearable conditions, especially in Libya and on the border between Greece and Turkey.” He drew attention to the crisis in Venezuela and prayed that “concrete and immediate solutions to be reached that can permit international assistance to a population suffering from the grave political, socioeconomic and health situation.”

Pope Francis concluded his powerful message praying that the Risen Christ, “who has already defeated death and opened for us the way to eternal salvation, may dispel the darkness of our suffering humanity and lead us into the light of his glorious day, a day that knows no end.”