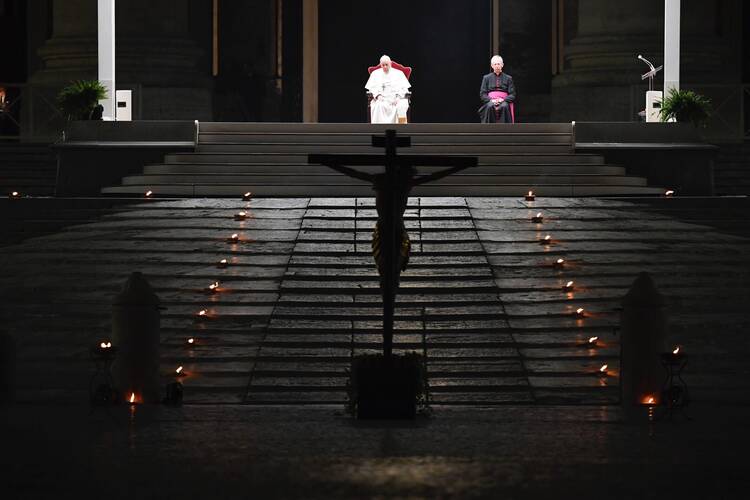 Pope Francis presides over the Way of the Cross in an empty St. Peter's Square as part of precautions against the spread of coronavirus. (Photo credit: Vatican Media)

Pope Francis presided over a profoundly moving, extraordinary Way of the Cross (Via Crucis) from the steps of St. Peter’s Basilica on Good Friday evening, April 10, overlooking an empty square due to the coronavirus pandemic. The miraculous crucifix from the church of St. Marcello in Rome, which was attributed with helping end “the black plague” in Rome in 1552, stood facing the pope, as a call to prayer to God to end this modern-day plague.

For more than half a century, since Pope Paul VI revived this ancient tradition in 1964, popes have travelled to Rome’s Coliseum for the Via Crucis, which normally attracts a vast crowd of pilgrims and tourists. As on past occasions, this reflection on the passion and death of Jesus was broadcast on television and social media by the Vatican and transmitted to a global audience of hundreds of millions on all continents.

Since Pope Paul VI revived this ancient tradition in 1964, popes have travelled to Rome’s Coliseum for the Via Crucis, which normally attracts a vast crowd of pilgrims and tourists.

The Way of the Cross was led by two groups, each of five persons, representing prisoners and health workers. The first group came from the “Due Palazzi” House of Detention, in the northern Italian city of Padua, not far from Venice. The second group was from the Health and Hygiene Directorate of the Vatican City State, which has been heavily involved in the fight against the coronavirus pandemic.

Individuals from these groups carried the cross in turn, starting at the obelisk in the center of St. Peter’s Square. They carried it around the obelisk for the first eight stations, and then moved up the steps on a path lit by torches to where the pope was for the next four, next to the miraculous crucifix. Each station began with a reading from the relevant passage from the Gospel account of the passion, followed by a meditation. This was followed by the recitation of the Our Father, the reading of a prayer by the pope and the singing of a hymn.

Pope Francis has long been concerned about the situation of prisoners in jails worldwide, and he invited the chaplaincy of the Padua house of detention, led by Father Marco Pozzo, to prepare the reflections for the ceremony. In this way, he brought to the world’s attention not only the trials and desperation of prisoners but also the faith, hope and love that can take root even in the most difficult situations, sometimes with the help of prison guards, chaplains, catechists and others who work with prisoners. The reflections also demonstrated the dramatic situation of victims, including family members of the prisoners, and how each in their own way can find a new path forward marked by faith, hope and love.

The Way of the Cross was led by two groups, each of five persons, representing prisoners and health workers.

The Vatican revealed that those who wrote the meditations included five prisoners, a family that was the victim of a murder, the daughter of a man given a life sentence, a prison teacher, a civil magistrate, the mother of a prisoner, a catechist, a volunteer religious brother, a prison guard and a priest who was convicted and then finally acquitted of an unspecified crime after many years in the justice system. The anonymous texts were written and read in the first person.

At the first station, where Jesus is condemned to death, a male prisoner said “many times that cry, ‘Crucify him, crucify him!’ is shouted out in court rooms and in newspapers. It is a cry I even heard against me: I was condemned, together with my father, to a life sentence.” He added that “alone in my cell, when I reread the pages of the passion of Christ, I burst into tears: After 29 years in prison I have not yet lost the capacity to cry, to feel ashamed of my past history and of the evil I did. I feel like Barabbas, Peter and Judas in one single person.”

At the second station, where Jesus takes up his cross, a couple revealed that “during that horrible summer our life as parents died together with that of our two daughters. One of them was murdered along with her closest friend by the blind violence of a ruthless man; the other, who miraculously survived, was forever deprived of her smile.” They confessed that “time has not eased the weight of the cross placed upon our shoulders: we are unable to forget our daughter who is no longer with us.” But “at the moment in which despair seems to take over, the Lord in different ways comes to meet us, giving us the grace to love one another as spouses, and to support one another, hard as it is.”

"At the moment in which despair seems to take over, the Lord in different ways comes to meet us, giving us the grace to love one another as spouses, and to support one another, hard as it is.”

At the fourth station, where Jesus meets his mother, a mother whose son was in prison said “not for a moment was I tempted to abandon my son in the face of his sentence. The day he was arrested changed our entire life: The whole family went into prison with him. Today people’s judgment remains implacable: Like a sharp knife, fingers pointed are against all of us, increasing the suffering we already bear in our hearts. The wounds grow with each passing day, they take our breath away. I feel Mother Mary close to me: she helps me not to give into despair and to cope with the pain.”

At the eighth station, where Jesus meets the women of Jerusalem, a woman said “How many times, as the daughter of someone in prison, have I been asked: ‘You love your father: do you ever think about the pain he inflicted on his victims?’ Over these years I have never failed to answer: ‘Of course, it is impossible for me not to think about it.’ But then I ask them this question: ‘Have you ever thought that, of all the victims of my father’s action, I was the first? For 28 years I have been serving the sentence of growing up without a father.’”

After each station Pope Francis read a brief prayer, and at the end, without giving a homily as he had done on previous occasions, he simply gave his blessing.

At the eleventh station, where Christ is nailed to the cross, a priest who was wrongly condemned and spent time in prison spoke. “How often, as a priest, have I meditated on this page of the Gospel,” he said. “When later, one day, they put me on a cross, I felt the full weight of that wood: The accusation was made in words as hard as nails, the ascent became steep; suffering weighed me down. The darkest moment was seeing my name pasted outside the courtroom: at that moment I realized that I was a guiltless man forced to prove his innocence.”

“I hung on the cross for ten years: My Way of the Cross was populated with dossiers, suspicions, accusations, insults,” he said. “Each time I was in the courtroom, I looked for the crucifix: I kept my eyes fixed on it as the law investigated my story. For a moment, shame led me to think that it would be better to end it all. But then I decided to remain the priest I always was.” However, he added, “I never thought of lessening my cross, even when the law permitted it. I chose to submit myself to a regular trial: I owed it to myself, to the young men I taught during the years at the seminary, to their families. While I was climbing my Calvary, I found them all along the way: They became my Cyreneans, they bore the weight of the cross with me, they dried my many tears.”

He concluded, “The day on which I was fully acquitted, I found myself happier than I had been ten years before: I experienced firsthand God working in my life. Hanging on the cross, I discovered the meaning of my priesthood.”

Pope Francis took the cross at the fourteenth station, and stood holding it under the canopied platform where he had been throughout the 90-minute-long prayer service. After each station he read a brief prayer, and at the end, without giving a homily as he had done on previous occasions, he simply gave his blessing.

Pope Francis seemed to feel there was no need for words: The emotion, prayerfulness and profundity of this unique Way of the Cross made more words redundant, and so he remained silent on this holy night.